NOTE: This post was written in 2016. Since then, the Boston Harbor Hotel has closed Foster’s Rotunda to the public and converted it to a $15,000-a-night suite. In exchange, they replaced this Privately Owned Public Space with a ground-floor remnant space. 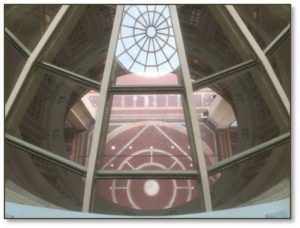 Looking down from the Grand Observatory

Boston’s buildings have many domes, cupolas, steeples, and bell towers. Usually one looks up at a dome from the ground although we can also look down on them from observation decks around the city.

Seldom, however, can we look both up and down at a dome from the same building. The Boston Harbor Hotel at Rowe’s Wharf provides both a dome and a cupola as well as both perspectives—but only at certain times during the week.

Dome vs. Cupola: In case you’re confused (it’s easy to do), a dome is “A common structural element of architecture that resembles the hollow upper half of a sphere,” while a cupola is, “A dome-shaped ornamental structure located on top of a larger roof or dome.” For a demonstration, look to the water side of The Boston Harbor Hotel where you’ll see a pavilion with a domed roof topped by a cupola. 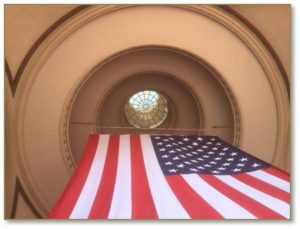 Looking up from below

You can’t miss the hotel’s 60-foot double-arched portico, an impressive and beautiful window onto Boston Harbor. The plaza underneath the arch connects the Rose Kennedy Greenway with the Harborwalk, a marina, a water transportation terminal, a floating stage and the harbor itself.

Stand at the center of the and look up. You will see all the way through one dome, a skylight to the cupola at the very top of the 80-foot coffered dome. People do this all day long and it’s a popular photographic subject. But you don’t have to stop there.

Built from the Top Down

The Boston Harbor Hotel presented its architect, Adrian Smith in the Chicago office of Skidmore, Owings and Merrill, with a difficult structural challenge. It was built on the site of the old South Battery, which had been placed on the eastern slope of Fort Hill, not longer extant, and Rowe’s Wharf. John Rowe was the patriot and wealthy merchant who donated the Sacred Cod to the State House. The original Rowe’s Wharf, built in 1764, was razed in 1962 during a period when Boston’s waterfront was in decline. 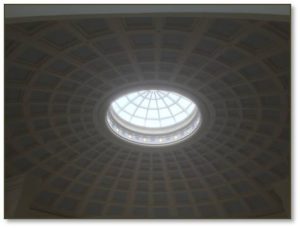 The 80-foot copper dome with cupola

In 1666 the South Battery was extended with fill to form a flat area called the Sconce so portions of the hotel were constructed on made land.  Because the hotel was located right on the water’s edge, SOM also had to contend with the surge of twice-daily high tides that added uplift, weight and increased water pressure on the foundation.

Conventional excavation of a basement without the weight of the superstructure would have been unable to counterbalance the impact of the tides.  The architects responded with an innovative procedure known as “up-down construction,” which means that the building’s steel superstructure and the below-grade levels for the foundation and parking garage were constructed simultaneously.

How did SOM accomplish this feat of engineering? It’s a fascinating story and you can get all the architectural and engineering details on Boston By Foot’s “Historic Waterfront” tour.

You can go up to the ninth floor’s Forester Rotunda and Grand Observatory to look down on the domed skylight and, through it, to the plaza below. Above you arcs the 80-foot, coffered, copper-roofed dome topped by a glass cupola that lights the rooms below. Take the short stairs up to the dining area for an even better view of the city on one side and the harbor on the other. 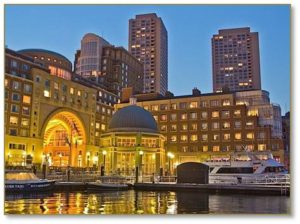 The pavilion, great arch and dome from the water

If you’re really lucky, you’ll see this perspective because you were invited to a wedding or other event that is hosted in the Grand Observatory. If not, you can still be escorted up there by one of the Boston Harbor Hotel’s courteous employees. Here’s how: 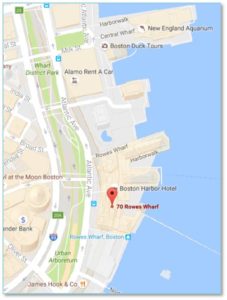 The Boston Harbor Hotel
70 Rowe’s Wharf, Boston 02110
Between Northern Avenue and the Aquarium

The Grand Observatory is open to the public from 9:00 a.m. to 4:00 p.m. on weekdays only and visitors must be escorted.  (Try to get invited to a wedding at the Boston Harbor Hotel. I have been fortunate enough to attend two and they were both memorable events.)

If you plan to drive, parking is available in garages along Atlantic Avenue and valet parking is available at the hotel itself. The BSA Space garage is halfway down the block between Atlantic Avenue and the Fort Point Channel and on weekends, they charge a set price for the day. That makes it easy to just leave the car and explore — or take one of Boston By Foot’s walking tours — without sweating the cost of parking. From the BSA Space garage, walk north along Atlantic Avenue or use the Harborwalk to reach the Boston Harbor Hotel.  The stretch at the old Northern Avenue Bridge is a mess but you can re-enter the Harborwalk on the far side.