Many Bostonians are familiar with the beautiful Art Nouveau Metro stations of Paris yet they walk right past our city’s own Beaux-Arts masterpiece. The T’s Green Line inbound station at Copley Square has an entrance, or headhouse, that is one of a kind and unmatched for its artistry by any other station in the system. Made of ornamental wrought iron, it was designed by the firm of Fox, Jenny and Gale to match and enhance the elegance of the Boston Public Library building behind it. The ironwork echoes the library’s graceful Italianate lanterns, and the canopy arch over the stairway to the inbound platform includes a seal with an open book. 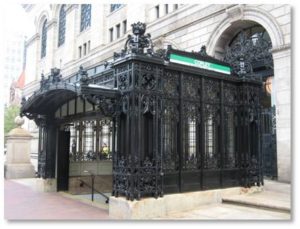 The headhouse was built by HeclaWinslow Co., the Brooklyn workshop that also produced the iron and bronze decorations on many of New York’s landmarks, including Grand Central Station and the Dakota apartment building, as well as the library’s external ironwork.

Completed in 1915, the Copley Station inbound headhouse is the only one of its kind in the subway system. It is listed on the State and National Register of Historic Places and is a contributing structure to the Back Bay Historic District.

Time, Weather, and Hard Use

When I first lived in Boston, a structure that had been called a “belle-époque confection” had fallen on hard times. The headhouse was in poor condition and deteriorating further with every hard winter it suffered through. Its delicate filigree of flowers and curlicues commanded little notice from city officials and passersby alike. While the MBTA recognized its merits, they lacked the money to save the headhouse from the effects of time, weather, and hard use.

Some of its parts were rusted while others were missing entirely. Thick layers of paint hid the wrought iron’s elaborate filigree designs. Glass panels were dirty and one had been painted over. A corner “lantern” was bent and twisted. The entire structure had become bowed, a situation not helped by the transients who slept on the roof.

The headhouse remained in disrepair until 2009 when a federal law mandated that the Copley Station be made accessible to people with disabilities. The addition of Federal money enabled the MBTA to rescue the headhouse and return it to its former glory by including it in the overall project. Because of its proximity to Charles Follen McKim’s Italian Renaissance library building, the inbound station gained an elevator that is separate from the headhouse but the escalators were moved to a new contemporary structure across Boylston Street.

The Work of Restoration 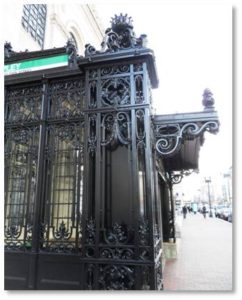 The MBTA hired the architectural-engineering firm of CBI to bring Copley Station up to code and meet performance requirements as well as to restore its aesthetic and historical significance. CBI brought on DeAngelis Iron Work of Easton MA, specialists in restoring sensitive historical projects, to resuscitate the Copley Station headhouse.

They began by dismantling, tagging and cataloging over 1,000 pieces of decorative ironwork. After cleaning and sorting them, the experts determined which pieces could be repaired and which would have to be replaced altogether. Fortunately the design is symmetrical and there were enough pieces for the firm to replicate much that could not be salvaged. The Cumberland Foundry of Rhode Island forged the replacement pieces. Eventually DeAngelis preserved over 90 percent of the original external and internal ironwork—an extraordinary amount.

Before the headhouse could be recreated, however, an entirely new foundation structure had to be created. It turned out that the ironwork was merely a decorative shell erected around a structural steel skeleton. Over time, however, that supporting framework had corroded so that the wrought iron was now bearing the headhouse’s full weight. A new galvanized steel frame now complies with codes to withstand snow, wind and earthquakes.

Copley Station headhouse before & after
(Photo by DeAngelis Ironwork)

The restored headhouse opened to the public in October of 2010 to applause from commuters and other passengers. Most were relieved that a temporary plywood structure over the stairs was gone and that construction had stopped. How many people, rushing down to catch a train or up to reach an appointment, took time to notice the newly restored ironwork or appreciate its artistry?

To be fair, the best way to understand the magnitude of the difference is to scroll through the Before and After photos from DeAngelis. Iron that was dull now gleams. Dirty, scarred windows shine and their delicate tracery emerges. The bronze (not iron) corner lanterns stand upright. Designs that were thick and dull are now crisp and clean. It’s an amazing improvement and one that certainly deserves respect from the pedestrians and commuters bustling around it.

Information and Directions to the Copley Station Headhouse 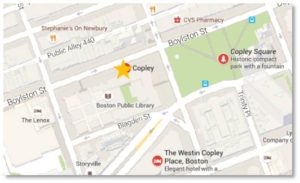 You may not be able to smell these wrought-iron roses but do stop and look at the Copley Station headhouse. It rises on the south side of Boylston Street across from the Old South Church and close to the Boston Public Library. You can either take the T to the Copley Station or park at the Prudential Center garage and walk east on Boylston Street almost to Copley Square.