This is the eighth in a series of posts on largely unknown spaces in Boston that are open to the public.

Whenever I lead a Back Bay Tour for Boston By Foot into the cloister behind Trinity Church I hear oohs and aahs of surprise as they get their first glimpse of the St. Francis Garden. The garden, which is enclosed by the church building and cloistered walkways, grows only a few feet from the Clarendon Street sidewalk but is invisible to pedestrians. You have to climb up three stairs to catch a glimpse. Then it appears like an emerald in a rose-gold setting.

Serenity in the St. Francis Garden 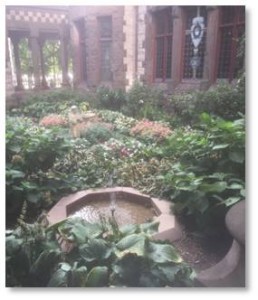 It’s a small rectangular space but so well designed and planted that it gives the impression of seclusion and great serenity. A modest fountain tinkles cheerfully in one corner, a cobblestone path winds through the plantings, and a birdbath draws in feathered friends. A modest statue of St. Francis holding a dove presides over the greenery.

The St. Francis garden is designed and maintained by members of the Trinity Church congregation and they keep it lush with shade-loving annuals and perennials: hostas, roses, ferns, impatiens, and small hydrangeas. White flowers and variegated leaves of the plantings light up the enclosed space. A beautiful flowering dogwood that once graced the center is now gone but that opens the garden to more sun.

Visitors can’t enter the St, Francis Garden but you can perch on the low wall of the walkway to breathe in the tranquility and enjoy the beauty. Close your eyes and listen to the fountain. You’ll forget you are in the heart of the Back Bay and only steps from one of Boston’s busiest streets, awash with food trucks, street vendors, shops and restaurants. 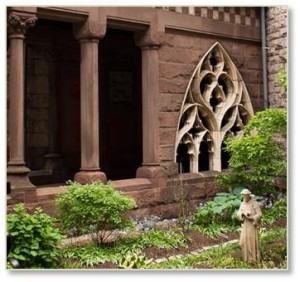 Also take note of the Gothic window tracery on the south side of the garden. This stone window tracery came to Boston from the Church of St. Botolph in Boston, Lincolnshire, England.

It was removed by the authorities of St. Botolph’s church to make room for a modern organ chamber. An American visitor saw the stones piled up outside the church and requested that they become part of a church in America. He mentioned Trinity Church, “the last built and noblest,” as a potential home. In 1879 Canon Blenkin, the Vicar of St. Botolph’s dispatched the tracery stones to Boston and they were installed in the wall of the cloister “as a precious memorial of the church of our fathers.”

The window tracery forms a wonderful Boston-to-Boston link. The original Puritans who came to settle Boston in 1630 came from Boston in Lincolnshire, which is about 100 miles north of London. They named their new community after their old home in England. The name Boston is itself a smearing of St. Botolph’s town or St. Botolph’s stone.

Information and Directions to the St. Francis Garden 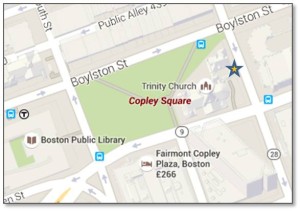 The St. Francis Garden doesn’t really have an address but it is easy to find and free to view. At the intersection of Clarendon and Boylston streets turn south on Clarendon Street. Trinity Church will be on your right.

Walk up the three steps that lead to the cloistered walkway and the garden will be right in front of you. Feel free to ooh and ah—everyone else does. The best times to see it are, of course, in spring and summer. But the garden has its own quiet beauty in the winter when St. Francis is wearing a snowy cap.