This post is both the 12th and last in my series on Boston’s Hidden Gems for 2015 and the first of my holiday posts on Boston’s angels.

Every western city has images of angels: big ones and small ones, cherubim and seraphim, paintings and sculptures, made of bronze and stained glass, found inside, outside, and on top of roofs and steeples. Although Puritan Boston is different, we have a few winged visitors.

I begin with this particular angel because of her connection with giving thanks and sharing one’s bounty. She stands in the far northwest corner of the Boston Public Garden. Although one cannot say the angel is hidden—she’s only a few feet away from the corner of Beacon Street and Arlington Street—this is a corner that is seldom visited. 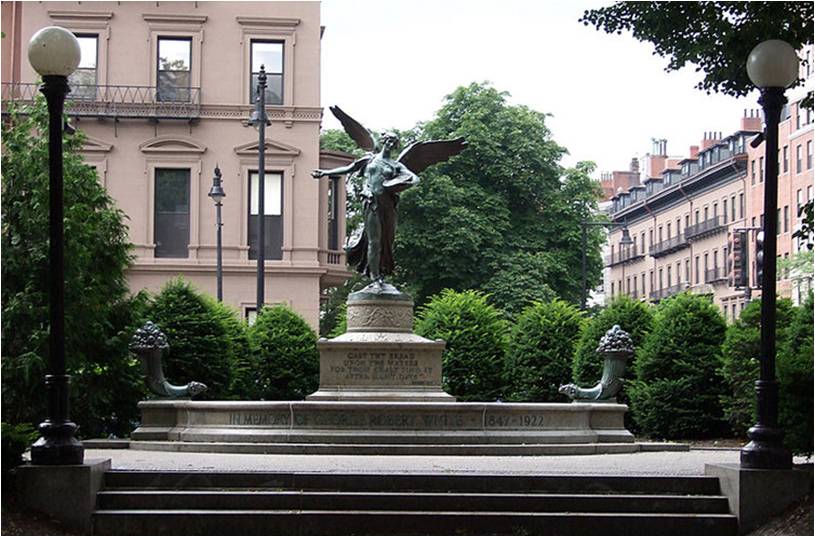 The yew hedges that border this corner have been pruned but the area is still shaded and secluded for all that it’s close to well-traveled sidewalks. Because there is no exit through the cast-iron fence around the Public Garden to those sidewalks, most visitors just skirt the northwest corner as they move from place to place. But if you just wander a bit closer you will see the angel. In fact, you can’t miss her.

The Angel of the Waters 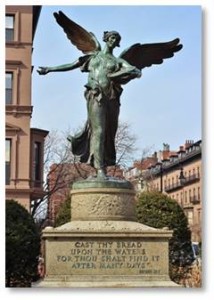 The Angel of the Waters stands atop a large monument that was commissioned by George Robert White, a well-known Boston philanthropist. Mr. White made his fortune with the Weeks and Potter Drug Company in Malden, MA, which he eventually bought and renamed the Potter Drug and Chemical Corporation. They manufactured the best-selling Cuticura antibacterial soap, popular with New England mothers.

During his lifetime Mr. White, a lifelong bachelor, gave generously to Boston’s museums, hospitals, schools, and other institutions. Upon his death in 1922 he left the city a charitable trust of $5 million for public art. His will stated:

“The net income of the fund is to be used only for creating public beauty and utility for the inhabitants of the city, and cannot be used for any of the normally provided services of the city.”

Without children to honor his name, Mr. White also requested that $50,000 be spent on this memorial so that his name would be remembered. In today’s dollars those figures would amount to a trust fund of $70,785,119 and a legacy for the memorial of $707,851. Five Boston officials administer the fund. In 1940 they appropriated money from the fund to commission the statue of Paul Revere, sculpted by Cyrus Dallin, as well as the bronze plaques that are located in Boston’s Paul Revere Mall.

The Angel of the Waters was sculpted by Daniel Chester French, the man who created the magnificent and monumental statue of the president who sits in the Lincoln Memorial. He collaborated with Architect Henry Bacon on that structure as well as on this—the last thing they worked on together. The two men completed both fountain and statue in 1924 and dedicated them the same year, two years after Mr. White’s death.

This monument has the official title of the George Robert White Memorial, and the angel is called “Casting Bread Upon the Waters.” The inscription on the fountain is from Eccliastes 11:1, which gave the statue its name:

“Cast your bread upon the waters;
For you shall find it after many days”

The Angel of the Waters stands atop a carved plinth and above a granite basin with a cobbled pool. No passive angel, this, no demure reminder of holiness or mortality. Determined, she strides forward with confidence and energy, holding a basket of bread in the crook of her left arm and sowing crumbs widely with her right. Her majestic wings spread out on either side and her robes blow back with the speed of her passage. 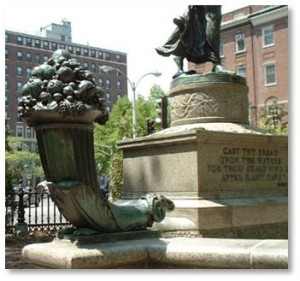 Intent on her mission, she represents what Mr. White did with his money, spreading it bountifully around Boston to nourish the spirit of its people.

Two large bronze carved cornucopias filled with fruit and vegetables reinforce the theme of abundance coming from generosity. They channel water through ram’s heads to fill the granite pool on either side. People sometimes place real fruit in the angel’s basket and around her feet.

A Lot to Teach Us

I wish this memorial had a more prominent position in the Public Garden because its angel has a lot to teach us, especially at the holiday season. After all, Mr. French originally gave her the title “The Spirit of Giving.” With her walk, her energy and her joy the Angel of the Waters seems to be setting an example for how to be our best selves now and throughout the year. 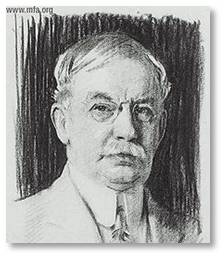 “Give of what you have.”

“Take joy in your generosity.”

“Be eager to help others.”

“Be confident in your conviction.”

“Go forth and help.”

Mr. White’s generosity could well be emulated by today’s business tycoons who are so eager to lay off their employees, even during the holiday season. In his will, he left each employee of the Potter Drug and Chemical Corp. $100 for each unit of ten years the employee worked. That $100 would today be worth $1,416.

You can find the George Robert White Memorial with its energetic angel in the Boston Public Garden’s quite easily. They live in the far northwest corner where Arlington Street and Beacon Street come together. You can park in the Boston Common garage nearby, as I often do when I’m giving a Back Bay Tour for Boston By Foot or attending a meeting at the @BostonByFoot office on Beacon Hill. Or take the T’s Green Line, get off at the Arlington Street station and walk north along Arlington Street. The Public Garden is always open and there is no admission fee.

1 thought on “Boston’s Hidden Gems: Angel of the Waters”