This is the fourth in a series of posts on largely unknown spaces in Boston that are open to the public. 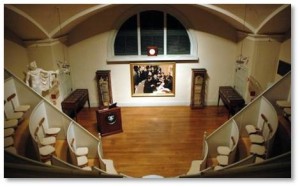 No one plays football in the Ether Dome but this unusual room had an enormous impact on the practice of modern surgery.

An architectural, historical and medical gem, the Ether Dome originally served as an operating amphitheater that sits atop the Bulfinch Building at Massachusetts General Hospital. Between 1821 and 1868, MGH doctors performed more than 8,000 operations in the Ether Dome. In October of 1846 three men made medical history in this room .

Edward G. Abbott suffered from a tumor on his jaw and removing it would have been extremely painful—making it difficult for the patient to remain still. But a young dentist named William G. Morton applied ether as an anesthetic for the first time in a surgical operation. When the patient lost consciousness, Dr. John Collins Warren leaned over him and removed the tumor without pain or struggle. The doctors watching this experiment from the amphitheater’s raised rows of seats were astonished at how smoothly and the operation went. 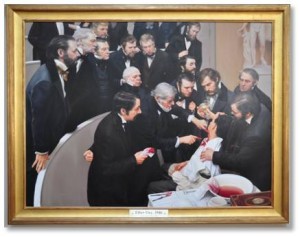 The Ether Dome Operation by Dr. Warren and Lucia Prosperi

The event was photographed and documented and in 2000 @MassGeneral’s service chiefs and physicians commissioned a painting as their gift to the hospital. Painters Warren and Lucia Prosperi created a large work to immortalize an event that ushered in the new age of pain-free surgery.

Using models dressed in 19th-century costumes provided by the Emerson College Department of Performing Arts, the artists re-staged the operation in the Ether Dome. They took many pictures from all sides and then set to work. It took the pair nearly a year to paint the 10-by-7 foot work, which was introduced during MGH’s annual Ether Day celebration. The painting now hangs in the Ether Dome.

Charles Bulfinch designed the Bulfinch Building, the original home of Massachusetts General Hospital, in 1816. Alexander Parris completed it after the original architect left Boston to work on the U.S. Capitol in Washington, D.C. 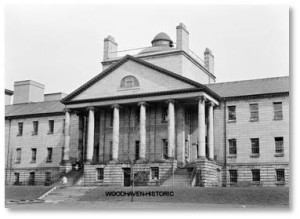 The Ether Dome cupola from the outside

Inmates at the Charlestown prison cut the white Chelmsford granite used to build the Greek Revival-style structure. As with many Bulfinch designs, the Bulfinch Building was ahead of its time.

Mr. Bulfinch situated the structure in the city’s West End on the shore of the Charles River so as to provide breezes and fresh air from all directions. He included a central heating system powered by a furnace in the basement. The cellar housed a pump that kept water circulating around the building, including to flush toilets in “water closets.” The Bulfinch Building opened to the public in 1821 and is one of the oldest public hospital buildings in the nation.

A Source of Natural Light

In the nineteenth century, an operating theater required as much natural light as possible and Bulfinch designed the Ether Dome to provide it. Windows in a saucer-shaped cupola light the small room from above. The seats for viewers rise precipitously on the south wall, giving each observer the best possible view of the operation below. Names of important figures in the discovery of ether are inscribed on brass plaques on each seat.

Today the Ether Dome serves as a meeting room, a teaching amphitheater and an historical landmark. MGH actively uses it for lectures and meetings, as one can see from a powered lectern and data projector. Visitors can explore its unique architecture along with a few unusual artifacts, including an Egyptian mummy, a skeleton, a marble statue of Apollo and early surgical tools.

Directions to the Ether Dome:

Admission to the Ether Dome is free and people can visit it when it’s not being used for presentations or faculty meetings. It’s wise to call ahead for times when the room is available to visitors. When you arrive at MGH, just ask for directions at the Information Desk and the receptionist will show you the way to the elevator: it’s on the fourth floor. 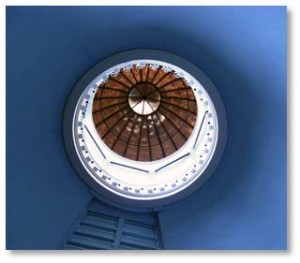 The Ether Dome cupola on the inside