Published in “Magical: An Anthology of Fantasy, Fairy Tales, and Other Magical Fiction for Adults”
Edited by Kelly Ann Jacobson, November 2014

Harno hefted his axe and moved cautiously up the hill as dusk crept through Eythorne Wood. The forest was silent. Creatures that should have been settling with May’s evening twitters and calls were instead hiding from a brilliant light no fire had made. Felling the blasted oak had taken longer than Harno had planned, delaying his journey home, but the bright white light ahead held darkness at bay and stopped his tired feet. Something terrible had come to the valley between him and the village. 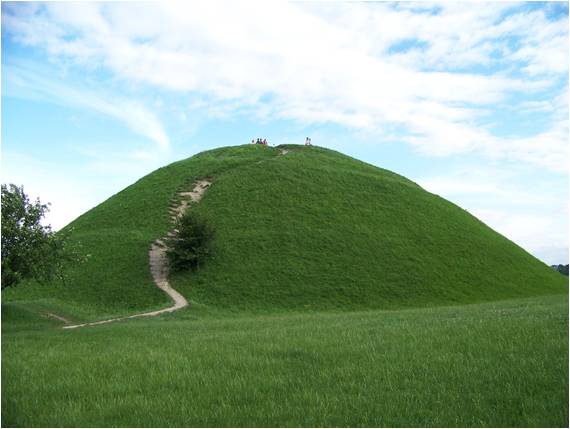 Slowly, carefully, he peered around the bole of a big chestnut tree, squinting against the glare and struggling to make sense of what he saw. The little valley with its quiet stream was filled by what could only be the Elf Hill of his granny’s tales. Its slopes arched from the grass to form a low dome, smooth and shiny as ice. Fear seized his heart as tightly as his hand gripped the axe. Elf Hill, looking just as Old Maurin’s stories had described it, lay between him and the village. Harno did not know why it had appeared in this wood or what the elves wanted there. He knew only that he had to get home to protect Luciann and their new babe.

Tearing his eyes away from the hill, he surveyed the valley. He could circle around its north end, staying beneath the trees until he reached the other side, and then speed toward the village. Run, the woodcutter told himself, willing his feet to move, to take that first step, but they remained as rooted as the trees.

A low rumble began, rising through the soles of his buskins before his ears heard the actual sound. It felt as though he was standing on Eyford Bridge when a heavy wagon crossed. A high-pitched whine joined the rumble. The new sound, hard and bright, grew louder, until it hurt his ears.  He clapped both hands over them, mouth opening so far that his beard curled on his chest, as if to let the sound out. Harno forgot to breathe.

This was dark magic, such as he had never encountered in his steady and predictable life. He was a simple man who followed the rules set by the priest and the elders, heeded Old Maurin when she spoke, and carried a pike in the Baron’s yearly muster. Now he tried frantically to remember what he knew of Elf Hill.

“It is the work of the devil,” the priest had warned from the pulpit. “He will lure you into its shining hell and flay your soul for his dark pleasure.”

Maurin the Hag, who always spat after the priest when he passed, also warned of Elf Hill, but for different reasons. “Time runs odd in there,” she had said, the fire weaving shadows on her lined face. “If you follow the elves’ call—and they will sing you pretty, my lad—you are lost. They’ll make your soul dance to their wild tune and long years will pass in an instant before the Little People release you again.”

“It’s just a story,” he whispered. “It can’t be real.” But now the hill reared up as solid as the village church and amazingly bright, as if the full moon had fallen and sunk halfway into the ground. This cannot be happening, he thought. The smells of damp soil and new leaves reassured him that he still stood in the real world. Harno recited the facts as if they would protect him. I say my prayers each night and go to Mass every Sunday. The one time I saw Baron Tarquin, I knelt promptly and tugged my forelock as is proper. The woodcutter shut his eyes hard and took five breaths before opening them again.

Elf Hill gleamed brighter than before. It began to open.

First a dark line appeared on the shining slope. It widened like a sly smile into a wedge, which gaped dark as a toothless mouth. For a long moment it remained that way, and Harno’s heart pounded.  Will I see the elves?  Will they look like devils?

A figure appeared in the dark doorway and, one by one, the elves came out.

The Little People were no taller than a boy, and delicate. Rich clothing covered their slender limbs, which were adorned with jewels. Their faces were fair and beautiful beyond description. Pale hair floated from under golden crowns in a fairy breeze only they could feel. The elves wandered about, peering into the night-dark woods as if searching for something. With a shudder, Harno pulled back into the chestnut’s shadow.

An elf turned, as if it had caught his movement. The others followed its gaze as it pointed a long regal finger in Harno’s direction. The woodcutter broke into a sweat despite the cool evening. Did they see me? If they did, what could they want with a simple woodcutter? Harno stood as rigid as the tree trunk, afraid to look again.

Long shadows moved in the bright light that bracketed the chestnut’s trunk. Harno groaned and said a quick Pater Noster. For added protection, he prayed to the Horned God and the Green Man of Eythorne Wood as well. Yet all the deities failed him. Harno felt a pull inside his head, a light touch as irresistible as the river’s current. It summoned him. The woodcutter’s obedient feet took one step and then another. Compelled, he walked stiffly out of the wood to face a row of elves.

Lights flared on the hill, with white ones marching around the structure’s rim while blue ones pulsed at the peak. The elves, wild and beautiful, beckoned him closer. As Harno’s feet marched forward, he cursed the stubborn oak that had resisted his axe until almost the last stroke. If not for that, he would be home now, eating supper and watching Luciann nurse Stefan. He would be there to protect them from this awful threat. Instead, the elves had found and ensorcelled him. He tried to hold Luciann’s image in his mind, but saw only his own face reflected in the elves’ large up-tilted eyes. Harno was stiff with terror, despite the soothing words they spoke so clearly in his head. Like Luciann’s cradle song, they urged him to be calm, to be happy, to keep walking.

“No,” he protested, but his mouth was dry, and the words emerged as a whisper.

“Be tranquil,” soothed the silent voice. “You have nothing to fear.”

“All will be well,” the voice replied.

Harno wanted to believe it, but how could he trust any creature that possessed his body and held it in thrall? His feet kept marching, as though they belonged not to Harno, but to the Little People. He was bigger than them, and far stronger. Two swings of his axe would destroy the eldritch creatures, strewing their delicate forms across the grass like bloody flowers. He willed his hand to lift the tool but it refused to obey.  The vibrations in his feet grew stronger, reaching into his bones and spreading up until his ears hurt and his head pounded with pain. Harno’s shout of anguish was swallowed by a high whine from the direction of Elf Hill.

The axe slipped from numb fingers and dropped, forgotten, on the bank of the stream. Harno waded across and walked up a smooth ramp to the wedge-shaped door. Slender fingers wrapped around his arm, and black elven eyes swathed him in magic. The woodcutter took a last step, entered Elf Hill, and was lost.

The ramp came up and the door slid shut, closing him away from Eythorne Wood, from Eyford Village, from Luciann and baby Stefan, from everything known and safe and loved.  Lights flared around him, illuminating the Elf King’s hall. They were brighter than any light he had ever seen but for the sun, and they shone with colors more intense than leaves in the autumn woods. The lights blinked and pulsed; some moved sideways like a snake. They blinded and confused him.

A tone sounded, higher than the church bell and more pure. It filled the round room and echoed in his head. Harno looked up, as if to find a bell tower, but saw only a domed ceiling covered with shapes and textures that he didn’t understand.

A voice spoke at his side, and Harno looked down. The Elf King stood nearby, but he had changed, and looked completely different. The fine clothing, rich jewels and fair hair had vanished, as if blown away by an eldritch wind. Harno now saw the elves as they truly were, without the glamour of richness and elegance that they had spun around themselves.

They stood no higher than a child of ten years, but were far more slender. Naked, they were covered only by smooth gray skin over a body that had no shape where bones and muscles should be. Harno began to pant in fear.

Their bodies were bad enough, but their heads—oh, their heads! Oval shaped, the heads were too large for the small bodies yet they stood upright on small, slender necks. Harno searched for features on those smooth faces but found only a small line where a mouth should be, two small holes instead of a proper nose. Yet the eyes were huge, oval and pointed at the ends, slanting upward in a face that seemed too small to hold them.

Those eyes were all one color, and that color was black: black as a forest pool, black as the graveyard at midnight.  The Elf King’s head tipped to one side and those awful eyes stared at him impassively like a hawk considering its prey.

Even a hawk’s eyes are golden, he thought frantically. Even a hawk looks more kind.

“Welcome to our ship,” the Elf King said inside Harno’s head. “We have a long journey ahead of us.

At the thought of staying in that domed hill—how could it be a ship?—Harno wanted to vomit. There was nothing beautiful or enchanted here. An evil magic had turned the elves into alien creatures beyond his understanding.

The Elf King’s words faded and were replaced in his head by a picture of the stars. Harno gaped at them, uncomprehending, until the stars of the Hunter brightened and the Dog Star at his feet grew even larger. This, the Elf King said, was their destination.

“We have plans for you, Harno,” the Elf King added as the Dog Star pulsed brighter still. “Such interesting plans. And so much time to spend together.”