I have written a lot about Boston: it’s street, buildings, doors, fountains, hidden places and even the city’s angels. To illustrate all these blog posts, I have taken a lot of pictures. Some of those photos appeared in the blog while others ended up on the digital cutting room floor.

The photos in this post are of colors or angles I found interesting and details that intrigued me. Sometimes I liked the light, while at other times it was the composition that attracted me. For one reason or another, they didn’t end up appearing on The Next Phase Blog but I think they deserve visibility. Today is their day to shine. 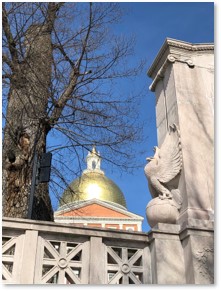 I start with an important building that is easily recognized: the Massachusetts State House. This picture happened on a mild winter day when I was on my way to attend one of the State House Library’s Author Talks.

Walking uphill through Boston Common, I came to the steps that surround the Robert Gould Shaw Memorial and lead up to Beacon Street. I liked the bright colors and the way the old oak and the granite memorial framed the building’s dome. Notice the eagle on the side of the memorial.

Originally made of white-washed wooden shingles, the dome changed color in 1802 when Paul Revere and Sons replaced the shingles with copper painted gray. It glammed up in 1861 when it was gilded. The dome has remained golden except for a few years during World War II when it was painted gray again so as not to be a bombing target. It’s the shining crown of the City on a Hill. 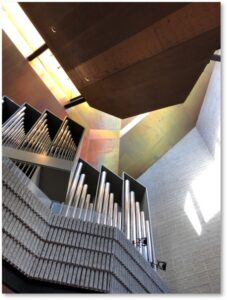 While attending a tour of churches in the Back Bay, I was intrigued by the variety of shapes and colors in the sanctuary of the First Church Boston, Unitarian/Universalist. The sunlight and shadow on the right wall complemented the angles of the ceiling on the left. Altogether, it made an abstract composition that I couldn’t resist.

Although I am not usually a big fan of Paul Rudolph’s architecture with its signature corrugated concrete façades, this sanctuary is filled with interesting shapes, textures, colors and light. If you like photography, make a point of visiting to see what attracts your eye. 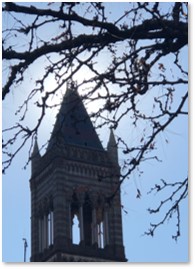 In the middle of leading a Back Bay Tour for Boston By Foot, I looked up and saw the tower of the New Old South Church silhouetted against the sun with bare branches in the foreground. Although it was mid-afternoon, it almost looks like a moonlit evening.

Our tour group was standing on the Commonwealth Avenue Mall looking south. Stopping the tour, I pointed out the image and we all took pictures. 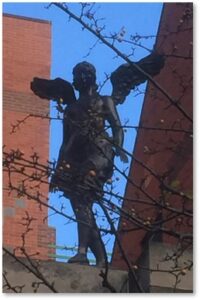 When I took photos of the Church Court Angel for my blog post on one of Boston’s Angels, I wanted to show what she looked like in detail. That meant this photo didn’t make the cut. But I liked this shot of her in silhouette against a vibrant blue sky.

I thought she looked like one of those superhero images, like Batman brooding from the top of a building or an Avenger looking down at the street. You never know what you might see when you look up. 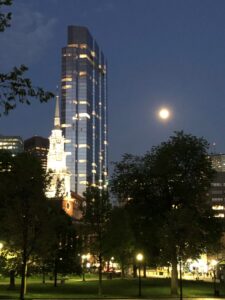 This is one of my favorite shots of the city because it telescopes multiple centuries in one view. I was returning to my car after leading a Haunted Boston ghost tour when I saw the brightly lit steeple of the Park Street Church highlighted against the gleaming Millennium Tower, a new residential building.

I liked the contrast of standing in Boston Common, created in the 17th century, looking at a church constructed in the 19th century with a 21st-century condominium tower behind it. White wood and reflective glass seemed to rise from the Common’s trees. The full moon topped off everything. 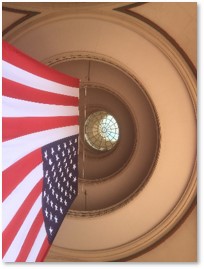 And speaking of looking up, here’s what you see in the Rowe’s Wharf/Boston Harbor Hotel’s rotunda. I was just wandering around the waterfront after visiting Independence Wharf for a post about one of Boston’s privately owned public spaces.

I liked the way the enormous American flag’s verticals lines and bright colors led up into the offset concentric circles of the dome with its sepia tones and the blue sky through the cupola.

This rotunda caps a huge archway that serves as a gateway between the city and the harbor beyond. In my opinion, the Boston Harbor Hotel is one of Boston’s most successful new buildings in how it integrates land and water. You can hear all about the amazing construction process that created it in Boston By Foot’s walking tour about Reinventing Boston. 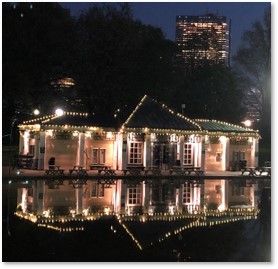 Here’s another night shot I caught wen returning to my car after leading a ghost tour for Haunted Boston. I spotted the lights on the Frog Pond Café and their reflection in the pond itself. It was too good a photo to pass up, especially with the looming presence of a contemporary office building beyond the trees in the background.

The Frog Pond, which once was actually a pond with frogs in it, now serves as a splash and wading pool for Boston’s children in the summer and a skating rink in the winter. The café serves snacks and light meals, especially a warming hot chocolate after skating.

These water-related activities are relevant because the Frog Pond is where Boston’s first municipal water supply came into the city. A geyser of fresh, clean water from Lake Cochituate in Natick signaled that advancement in October of 1848 with a day-long Water Celebration.

The Frog Pond also gave Edgar Allan Poe a term with which to criticize the city of his birth. He liked to call Boston “Frogpondium” and its citizens as “Frogpondians” to puncture the twin balloons of ancestral wealth and Transcendentalist complacency.

After a year of pandemic-induced inactivity, I will be back in Boston taking more photos this year.

Sometimes, I just drive in and walk around, looking for inspiration for my next blog post and photographing what catches my eye. With the city opening up somewhat, I can do that again, too.