Wandering the twisty streets of Boston’s North End, you’d never expect to find an Italian palace off on the side. Nevertheless, there it is: the Palazzo Ducale, or Doge’s Palace in Venice. And not only that, you’ll see Venetians in 16th-century dress going about their day, complete with gondolas on the lagoon.

No, this noble structure doesn’t loom over all the red brick and granite buildings of the North End because it’s done in miniature and exhibited in a diorama that can be found on permanent display inside the North End Branch of the Boston Public Library on Parmenter Street. 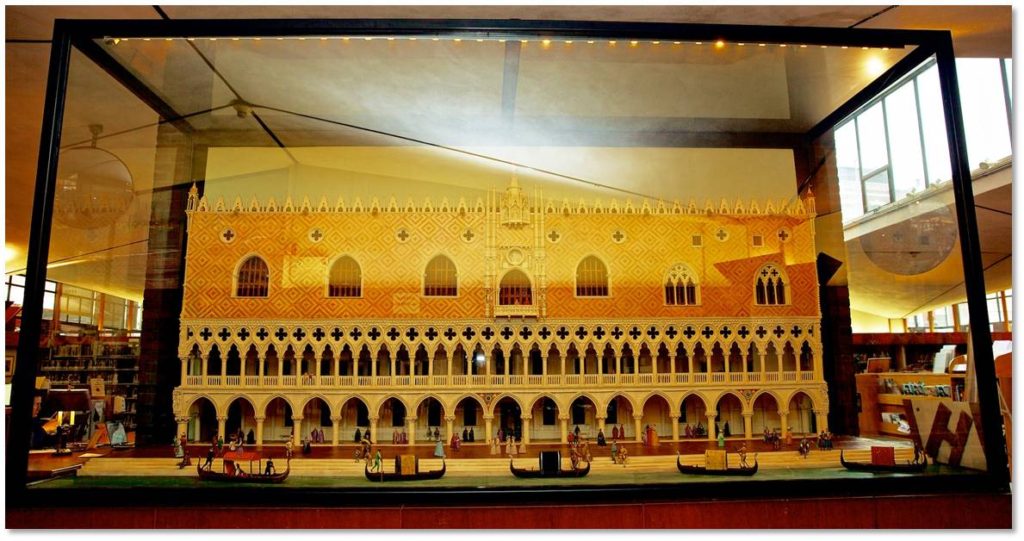 The original Palazzo Ducale is an enormous structure that served as Venice’s seat of government for many centuries. It housed the city’s elected ruler, or Doge, and was the venue for its law courts, its civil administration and bureaucracy. Until relocated across the Bridge of Sighs, the city jail also resided there. 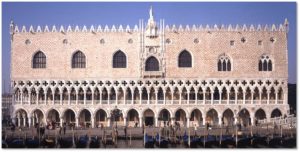 The structure, built in an ornate Venetian Gothic style, was renovated, reconstructed and extended from the tenth to the fourteenth centuries. The side of the palace facing the lagoon features, “a ground-floor arcade on the outside, with open first-floor balconies running along the façade and the internal courtyard side of the wing.”

But why is there a scale model and diorama of the Doge’s Palace in Boston’s North End? The explanation, while simple, has a complicated history. It starts with Henrietta Gardner Macy (1854-1927). Despite holding two names that are deeply rooted in Massachusetts history, Ms. Macy was born in Illinois. She attended Vassar College in New York and trained in kindergarten work in Boston. In 1878 she founded a kindergarten for the Italian children of the North End and spent several years teaching there. When she was nearing 30, she took a position as European correspondent for several journals and traveled extensively.

In 1890 Ms. Macy settled in Venice, a city with an appealing artistic environment, and her studio in the house known as Ca’ Frollo was well known. Although she lived in poverty, she shared what little she had with the needy, particularly the neighborhood children. Ms. Macy also cared for poor children and the Italian government later built a school named after her in the poor quarter of Venice. 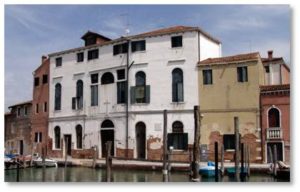 One summer, while hosting the two young sons of some friends, Ms. Macy entertained them by building a model of her favorite Venetian building, the Doge’s Palace. The boys planned to visit her again during their winter school break to continue helping with the work. Unfortunately, they fell ill during an epidemic of diphtheria and died.

In her grief. Ms. Macy decided to honor their memory by building a larger model of the Doge’s Palace in the hope that it would be seen and enjoyed by children who could not travel to Venice in person.

She worked on this model in her spare time for three years until, nearly complete, it attracted the attention of art collectors and museums that were interested in purchasing it. Accepting an offer from the Metropolitan Museum of, Ms. Macy shipped the model to New York City. During the journey, however, it was stored temporarily in England where a fire broke out in the warehouse, destroying it completely. 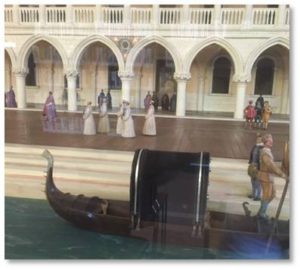 Patricians on the piazza

Undaunted, Ms. Macy began work on a third model, using revised and improved plans. This new version also took years of her spare time but no one would commit to purchasing it until it was complete. The model was still unfinished when Ms. Macy died in 1927 at the age of 73.

Her friend Nina C. Mitchell, took up the torch and hired Louise Stimson of Concord, MA, to complete the model as a memorial to Ms. Macy. Ms Stimson has created many dioramas and the finished model was presented as a gift to the BPL’s North End Branch so that everyone in the neighborhood can enjoy it, “. . . particularly the descendants of those children whom Miss Macy had taught in her North End kindergarten.” 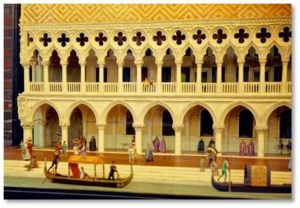 The model of the Palazzo Ducale is large, detailed and complex with a variety of figures, both notable and ordinary. The painter Paolo Veronese talks with his wife, while the Companions of the Hose, a group of entertainers and musicians, sets up to play. Foreign merchants negotiate along with peasants from the market and man carrying a cassone, or marriage chest. You can tell a great deal about the characters just from their dress:

More information on Mis.Macy can be found in “The Nun of the Ca’ Frollo: the Life and Letters of Henrietta Gardner Macy” by Clementine Bacheler.

You can find both the library and model quite easily. When you enter the building you will see a small courtyard with a marble bas relief of Dante Alighieri at the end. The model is on the other side of the sculpture.

Parmenter Street runs between Salem and Hanover Streets in the North End. Parking anywhere here is difficult. If coming by car, park at the Government Center garage or in the public garage at 20 Clinton Street or any of the private lots on Atlantic Avenue. The closest MBTA stop is the Haymarket Station on the Green and Orange lines. From there it’s a short walk across the Rose Kennedy Greenway to either Salem or Hanover streets.