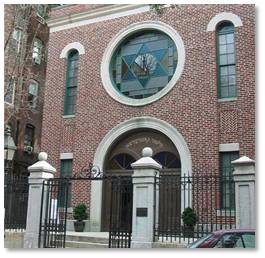 I marked Easter with a post on the Catalonian Chapel. Now it’s time to mark Passover, which starts tomorrow, with a post on a hidden gem for the Jewish faith. The Vilna Shul, tucked away on Beacon Hill, is both hidden and an architectural and historical treasure.

Although it’s located on the north slope of Beacon Hill, only a block away from busy Cambridge Street and Massachusetts General Hospital, few people know about the Vilna Shul and not enough people visit it. This is unfortunate because its history unites the story of African Americans and Jews in Boston.

At that point in Boston’s history, the North Slope was a very different place from the sunny side of Beacon Hill, which housed the city’s wealthy and well-educated elite. As an extension of the West End it housed an immigrant working-class population that included American Blacks, Jews, and Irish. When the black population moved out in search of more room, their buildings were purchased by European Jews who were accustomed to living in crowded ghettos.

In another irony, the 12th Baptist congregation moved out of 45 Phillips Street in 1907 after purchasing the former Temple Mishkan Tefila on Shawmut Street in Roxbury. They sold the Beacon Hill structure to a group called Anshei Vilner, to become its permanent synagogue. Anshei Vilner was formed to serve “the people of Vilnius” in what is now Lithuania.

The Vilna Shul Moves Down the Street

Ten years later the city purchased 45 Phillips Street from the congregation and razed it to expand the Wendell Phillips School. Anshei Vilner moved down the street to number 18 and laid the cornerstone for a new synagogue on December 11, 1919. The new synagogue was designed by Max Kalman, the only Jewish architect in Boston, and built by Israel Levine, a building contractor and a member of the congregation. 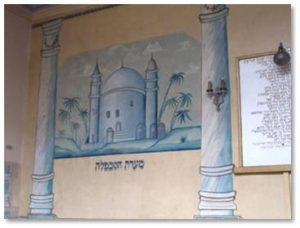 One of the restored murals

When it was complete, the Anshei Vilner members followed a tradition of Eastern European Jews and painted three sets of murals on the walls. Although these artworks were later covered over with beige paint, they have been reclaimed and are among the few examples of pre-war Jewish art in the United States.

The building features many large windows and unusual skylights to let in as much light as possible on the shady north side of Beacon Hill. As an Orthodox synagogue, the Vilna Shul has a separate section for the women on the second floor with a floor that slopes down from the back wall. This section is decorated with paintings of Rachel’s tomb and the Cave of Machpelah. 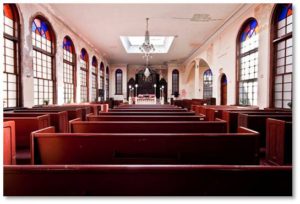 Second, the City of Boston demolished the entire West End in a well-intentioned but misguided urban renewal project. The Vilna Shul was left as downtown Boston’s last immigrant-era synagogue of the 50 that had once existed.

The Vilna Shul eventually disbanded in 1985 when the congregation was down to three members. The building was closed and threatened with demolition. Instead, a non-profit organization acquired it to house Boston’s first Jewish museum. The structure is the oldest Jewish building within Boston’s city limits whose entire history has been devoted to activities of Jewish faith and culture. The Vilna Shul is also noteworthy because it is one of only two free-standing buildings still in existence on the hill’s north slope.

When we first saw the Vilna Shul many years ago, the building was shuttered and decrepit, with paint flaking off the wood. The second time we went past the building was open but clearly in a state of renovation. The organization had repaired the roof, rebuilt the windows and skylights, and stabilized the structure, which had suffered water damage.

We could see the ghost of what it had been as the murals were uncovered in small segments, woodwork was cleaned and lighting fixtures rewired or replaced. Now it’s an historic landmark that shines after a $3 million face lift. The Vilna Shul looks similar to when it opened in 1919: the paint sparkles, the ornamental wrought-iron fence and gate with a Star of David have been replaced, and the murals brighten the walls.

The building is now the Center for Jewish Culture, an educational and cultural organization that offers religious services, concerts, lectures, film screenings and celebrations. It also houses a small museum on the history of both the synagogue and Boston’s Jewish community. 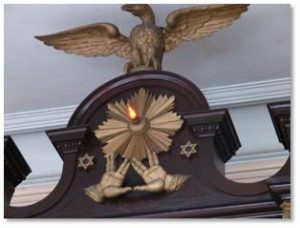 An interesting contemporary note is that the Vilna Shul’s Ark of the Covenant is decorated with carved lions, an eagle, a crown, and two hands raised the priestly Kohanim blessing that Star Trek fans recognize as the Vulcan greeting.

The late Leonard Nimoy, who played Mr. Spock in both the Star Trek television series and the movies, grew up in the West End of Boston not far from Phillips Street. The ark also features carved clam shells, which are not kosher but definitely connect the Vilna Shul to Boston’s history. 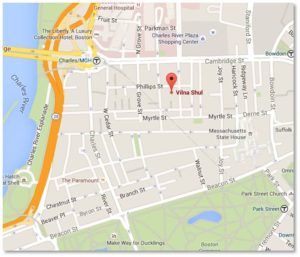 Nearest T Stop — You can reach the Vilna Shul from the MBTA’s Charles/MGH stop. Walk east on Cambridge Street, turn right on Anderson and then left on Phillips.

Nearest Parking — There is nowhere to park on Beacon Hill (nowhere, trust me) so it’s best to put your car in the Boston Common Garage. Walk north on Charles Street, turn right on Revere and then left on Anderson. Turn right onto Phillips and you’re there.