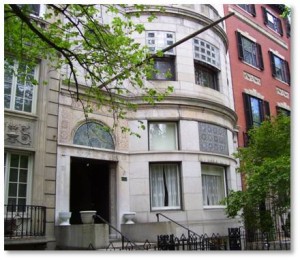 The Ayer Mansion at 395 Commonwealth Avenue is on the block just west of Massachusetts Avenue, which technically places it in the West Bay, rather than the Back Bay. It is, however, included among Back Bay houses because it is both historically notable and artistically spectacular.

The house was designed by Architect A.J. Manning in collaboration with Louis Comfort Tiffany, who created both exterior and interior art work. 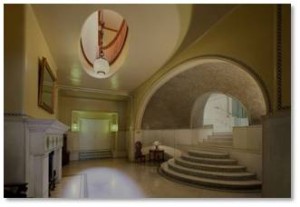 Mrs. Ayer was a “theater buff” who loved travel, the stage and bustle of the city. An amateur actress, she was involved with local theater and  was a “diseuse” who performed monologues. Mr. Ayer began courting her by taking her (chaperoned) to see Edwin Booth in “Hamlet.”

As outsiders, non-Brahmins, and not part of Boston’s insular social group, the Ayers were never going to fit in to the city’s tight-knit web of “good families” with their network of what William Dean Howells dubbed “cousinships.”

Embracing their out-crowd status, they decided to build something very different. Given the cautious, conservative approach of most Bostonians, this was not difficult to do. The Ayers certainly succeeded in shocking their more reserved contemporaries–and neighbors–with a house that looked like nothing else in Boston.

In planning the mansion, Mrs. Ayer made sure she had a stage of her own to tread. This astonishing work of art is located just inside the lobby to the right. It includes a proscenium arch lit by electric bulbs, hidden doors on each side for entrances and exits, and five semi-circular stairs leading to five narrower straight stairs.

At the top is the piece de resistance. In structure, it’s just a landing with stairs leading to left and right from either side and a flat back wall. 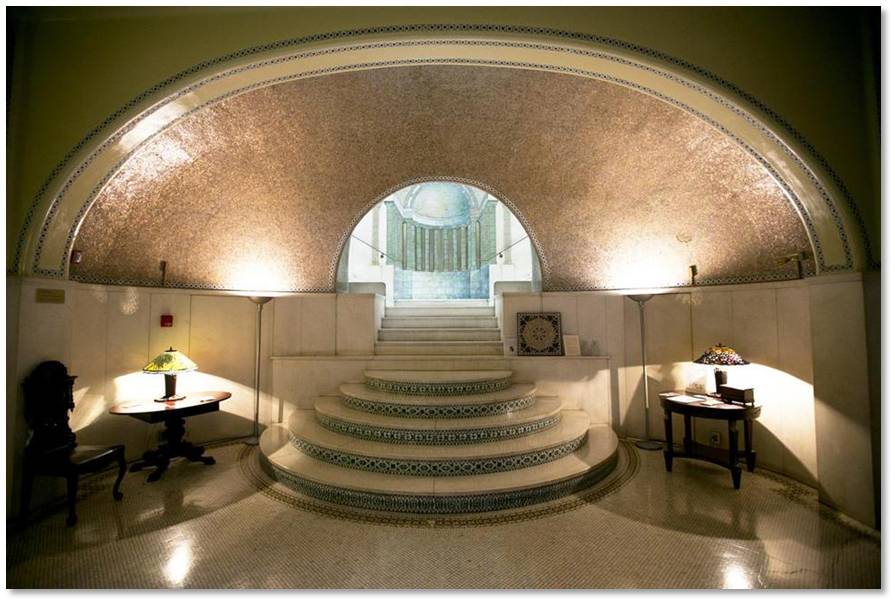 You would never think it’s flat, however, because that wall holds a true hidden gem: a trompe l’oeil glass mosaic mural of a classical temple that creates the illusion of space and light where none exists. It’s made of opalescent glass—semi-transparent glass that is backed by metallic foil—and “plated” surfaces that layer clear and opaque glasses to add depth of color and create the perception of three dimensions.

No piece of the mural projects or recedes more than a half inch, yet the viewer is led to think she can walk straight ahead into a columned and domed temple. The adjoining marble engaged columns, raised on a slightly projecting plane, further add to an optical illusion so complete that it is almost impossible to stand before it and believe that the space does not exist.

The rest of the Ayer Mansion is replete with other L.C. Tiffany touches from lamps to light sconces and a globular chandelier, from intricate woodwork to the back-lit glass mosaic ceiling over the staircase. The mansion’s interior holds a treasure trove of Tiffany glass and the exterior sports mosaic panels on the balcony and a glass mosaic fanlight over the front door. 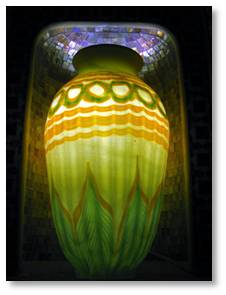