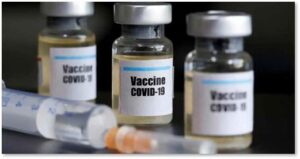 We wrapped up February 2021 and recognized (I won’t say celebrated) the anniversary of a pandemic shutting down the world’s economies. With new vaccines in circulation, we may have reached—I hope—the beginning of the end of this crisis.

Like many people around the country, I am frustrated and angered by how long it is taking to get enough vaccine distributed to the states. I am particularly angry about how slow the rollout has been here in Massachusetts. The well-meaning attempt by our state government to prioritize the most vulnerable people meant a very slow introduction and some wastage of the vaccines in opened vials.

A Complex and Difficult Process

Most infuriating, however, has been the complexity and difficulty of scheduling an appointment to get the vaccine. Here’s an example from one of my attempts, a scenario that is fairly common. 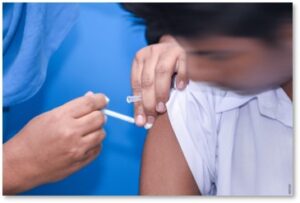 logged on to the state’s Vaxfinder web site, entered the necessary information, and saw that five sites had immediate availabilities. Yowzah! I clicked on the nearest one and Vaxfinder put me into a waiting room. It told me to go roundup all my medical insurance information, which I did.

Like many people, I have gotten up in the wee hours of the morning to try. Nothing. My husband waited until just after midnight to try. Nada. We have gone into the CVS website multiple times to no avail. In fact, I received a cell-phone message from CVS that said,

“Hundreds of COVID19 vaccines available in the next 2 days for patients 65 and older and other eligible patients. CLICK cvs.co/COVD.”

Wow! I got right into the site and was told there were no availabilities anywhere in the state. Back in the day, we called this a bait-and-switch scheme.

A Cold Open for a Broken Process

Saturday Night Live got it right, as it so often does, with its cold-open segment called, “So You Think You Can Get the Vaccine.” Despite the humor, it highlights the fact that the most prioritized group—old people—are the ones least able to navigate the confusing, frustrating, and ever-changing websites that serve as the primary portals for scheduling an appointment. 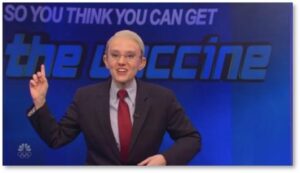 We have people spreading tips and suggestions by social media and word of mouth. Scoring a vaccine appointment in the U.S. is like finding a pound of coffee in the old Soviet Union. We can’t get to herd immunity if the herd can’t work the system. My opinion is that, if you have to game the system to use the system, then the system doesn’t work.

I’m pretty computer savvy and yet I’m sometimes ready to pound the wall. That happened on Monday. A friend alerted me to a hospital with availabilities, so once again I played vaccine roulette. I went to the website for Lowell General Hospital and followed the website’s directions. I entered all the correct fields in the form except for one: Reason for Visit. That field wouldn’t allow me to type in a reason, neither would it give me a pull-down menu. But I couldn’t go to the next step and schedule an appointment without entering the information. Brick wall.

I called. They couldn’t help me but forwarded my complaint. Anyone want to bet on whether that time will still be available by the time they address the complaint? Me, neither. 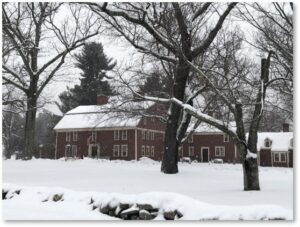 The weather this February 2021, cold and snowy, gave me good reasons to stay home and write. Suze has better weather where she lives, but published her regular Monday posts.

Here’s the roundup of February 2021 posts:

Now we march onward into March. It came in like a lion, so I have hopes it will go out like a lamb for an early spring.

The good news is that I finally succeeded in getting an appointment at Lowell General for March 19. I’m looking forward to that and to the two weeks after that. The bad news is that our Viking River Cruise, rescheduled from last year for this April, has been cancelled. We rebooked for next April. It could be worse. It has been worse and still is for too many people.

After vaccination, I will still take all the normal precautions but it will be nice to worry just a little less.