This is the thirteenth post in my series on Boston’s Bronze Menagerie of animal statues.

Spring is a froggy time when amphibians of all sizes emerge from hibernation to sun themselves on logs and spawn a new generation of peepers and croakers. Boston’s Frog Pond started out that way—a place fed by a natural spring where cows drank and boys hunted frogs. It was one of three ponds on Boston Common and is the only one that remains. The frogs around the pond now are all of the sculptural variety and can be found in a number of places nearby.

History of the Frog Pond 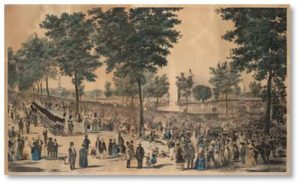 The Frog Pond has an interesting history. In 1848 it became the focus of Boston’s Cochituate Water Celebration. On October 25 of that year a fountain of water shot 80 feet above the Frog Pond to inaugurate the city’s first public water supply. That’s when water piped from Lake Cochituate in Natick replaced the city’s cisterns, wells, and springs, giving citizens a steady supply of pure drinking water for the first time.

At that point the Frog Pond was lined with stones and edged with curbing; boys sailed model boats on it. The Frog Pond was so identified with the city that Edgar Allan Poe, who was born here, used it to insult Boston’s Transcendentalist writers. He found their work “didactic” and “moralizing,” employing, “obscurity for obscurity’s sake.” He likened writers like Henry Wadsworth Longfellow and James Russell Lowell to the croaking of frogs and labeled them “frogpondians.”

Over time, the Frog Pond declined due to shrinking budgets and lack of maintenance. It leaked and sometimes lacked enough water to fill it. It was rescued in 1995 when a new skating rink was constructed and leased to the Boston Common Frog Pond Foundation. The success of this venture, later taken over by the Skating Club of Boston, has made the Frog Pond a recreational center for children and turned an eyesore into a pretty and pleasant place to visit. The pond is now paved with concrete and used as a children’s wading pool with a spray fountain in summer and an ice skating rink, run by the Skating Club of Boston, in the winter. 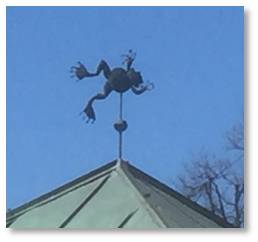 The only frog in today’s well-used Frog Pond is on the weathervane over the building that houses a café, refreshment stand and rest rooms. He’s an energetic type, genus unknown, but big enough to be an American bullfrog (rana catesbeianus).

These frogs tend to lurk around the edges of ponds and were often hunted for their meaty legs. We had a lot of them in the pond behind our Sudbury house and their booming calls of “ruhm, ruhm, ruhm,” could get loud enough to wake you up on a warm summer night.

Most of the pond’s frogs have migrated from a short distance to the nearby Tadpole Playground where their bronze incarnations enchant the children who play on and among them. The Tadpole Playground was reconstructed and renovated nearby in 2002 with a grant of over $1 million from an anonymous donor. This money allowed the city’s Parks and Recreation Department to go beyond simply replacing an outdated and decrepit wooden playground structure. They hired Copley Wolff Design Group, the same firm that had rehabilitated the Frog Pond, and CWDG integrated both art and whimsy into the new playground’s design. 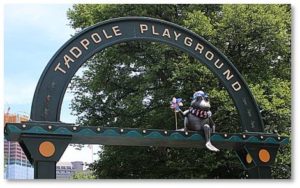 The fisherman frog (with a pole) and thinker frog sit outside the playground on the edge of the pond. Inside, there’s a snorkel frog, a lifeguard frog for the little bronze tadpoles, and a sunbathing frog.

A gatekeeper frog perches above the gate to the playground, where he welcomes the children and keeps watch over them. Like the Make Way for Ducklings statues across Charles Street in the Public Garden, this frog is frequently decorated for holidays and special events. His upraised right hand might hold anything from a bouquet of flowers to a plastic pail and shovel.

In addition, some two-dimensional frogs can be found in the illustrated panels mounted on the fences around the playground. These were done in collaboration by artist Mark Cooper and the children of Citizens Elementary School in Dorchester. A big bullfrog lurks in the mosaic medallion by Lilli Ann and Marvin Rosenberg that’s just inside the gate.

Directions to the Frog Pond 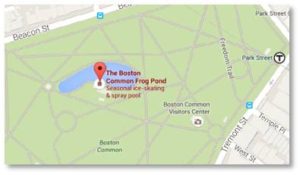 Take the T’s Green Line to the Park Street Station and walk west. Or park in the underground Common Garage and walk east. The playground hours are listed here. Do not expect to go skating in the summer or splashing in the winter. Opening day for the spray pool in 2016 is Friday, June 24. It will be open from 11:00 a.m. to 6:00 p.m. through Labor Day.