To find an elephant statue in Boston, we have get creative. Once upon a time, we could find a beautiful carved head on the elephant house at the Franklin Park Zoo. Unfortunately, that structure was demolished in 1878 after years of neglect and disrepair. I hope the African elephant head found another home somewhere and wasn’t smashed to dust but the wrecker’s ball is often not subtle. 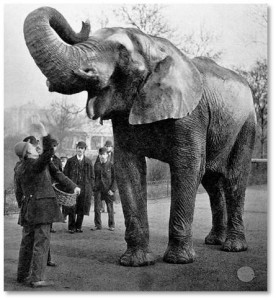 America’s most famous showman was also a founding trustee and benefactor of Tufts. And Jumbo was a real elephant who lived at the London Zoo for 16 years, giving “howdah” rides to little children. P.T. Barnum wanted Jumbo for his circus and acquired the elephant in 1860, paying $10,000 for him (about $240,000 today) and igniting a storm of outrage in England.

One of the nation’s first animal celebrities, he came to the United States in 1882 and sparked a “Jumbomania” fad with products of all kinds flooding the market. It was sort of like the Star Wars merchandise of today.

Jumbo the elephant toured with Mr. Barnum’s circus for three years until he was hit by a train and killed in St. Thomas, Ontario, Canada at the relatively young age of 24. Think of the sorrow over the recent death of Cecil the Lion and you have a small idea of how the world reacted to the demise of famous Jumbo.

Always one to take advantage of a good marketing opportunity, Mr. Barnum saved Jumbo’s 1,500-pound+ hide and had it stuffed. The animal’s bones were also preserved. Both traveled with the circus and were displayed in museums. Then Mr. Barnum donated the stuffed Jumbo to the Barnum Museum of Natural History at Tufts University where he remained in “Barnum Hall” for 86 years. (The elephant’s heart was purchased by Cornell.) The skeleton went to the American Museum of Natural History, where it was a popular exhibit for many years but is now in storage. 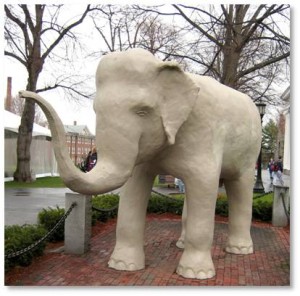 For a while Jumbo was replaced with a concrete and papier mâché statue of an Indian elephant that the Class of 1958 purchased from the now-defunct Benson’s Wild Animal Farm. But that stand-in pachyderm did not meet Jumbo’s standards—too small, wrong species, not inspiring. 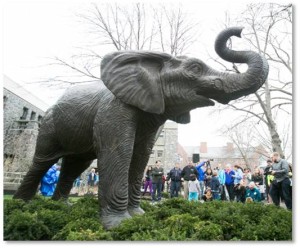 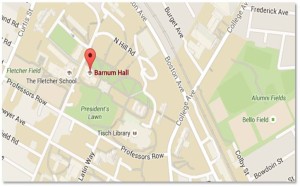