This is the tenth post in my series on Boston’s Bronze Menagerie.
It is dedicated to my former boss and friend David Fowler, who will be watching
this year’s race instead of pounding the pavement to reach his goal of finishing
10 Boston Marathons. 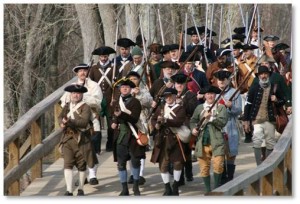 Monday is Patriot’s Day in Massachusetts—the  holiday when we celebrate the start of the Revolutionary War. On April 19, 1775, Companies of Minute and Militia from communities all around Concord armed themselves and marched toward Lexington Battle Green and Concord Bridge to engage the British Regulars.

Every year on April 19, Companies of Minute and Militia still march along the Battle Roads and re-enact the two momentous engagements in which the first shots of the war were fired.

(See Ted Kochanski’s excellent and very detailed comment on the sequence
of what transpired on April 19, 1775.)

Also on April 19, thousands of people run far faster and much longer in another annual Patriot’s Day ritual: the Boston Marathon. After sprinting, running, or jogging — whatever pace they can manage — for 26.2 miles, they end at the finish line by the Boston Public Library on Boylston Street. On the next block is Copley Square and that’s where you’ll find the bronze statues that memorialize the people who run marathon.Here are two animals that completed a different race at their own pace.

The Tortoise and the Hare are large bronze critters that were created by local sculptor Nancy Schön. A runner herself, she wanted to create a statue to honor those who run the marathon but knew it was impossible to create an image of one human who could encompass the two genders and myriad nationalities who set off from Hopkinton, MA, headed to Boston every April 19. Instead, she looked to create “a meaningful metaphor for the race.” She also wanted a sculpture that would be kid-friendly. 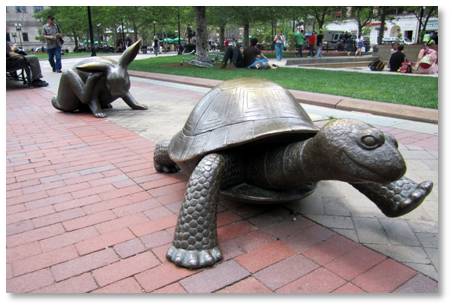 Ms Schön settled on Aesop’s fable of the tortoise who plugs away and his opponent, the over-confident hare, to represent all the myriad men and women who run and power wheelchairs along the route every spring. After all, the elite runners sprint across the finish line while the majority race simply to reach it. Some run for charity, some for the personal challenge and some for the fun—and the accomplishment—of it. Others crawl across hours after the crowds have gone home. There are many ways to win a race that don’t mean crossing the finish line first.

The sculpture was her idea but the Friends of Copley Square sponsored it to bring a “human factor” to the area  and to provide something that’s fun for the neighborhood’s children. The two animals were cast in Boston’s Chelsea neighborhood and installed in May of 1995. The Tortoise and the Hare were dedicated in 1996 on the 100th anniversary of the Boston Marathon. This year is the 120th running of the race.

Plugging Away and Happy

The Tortoise, still plugging away, is ahead and happy about it while the overconfident Hare has finally woken from his nap but stopped along the way to scratch his ear. The animals are much larger than life size and practically invite children to climb on them—which they do frequently. 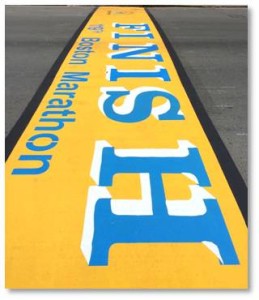 A plaque near the pair of animals reads:

Friends of Copley Square
May 1995″

I have never run a marathon. I used to run when I was in high school before running was cool, especially for girls. I could sprint and anchored the relay but I had no real talent for distance. No matter how often I ran, I never got past the same point and that wasn’t very far. My feet seemed to want to stick to the ground. Later, I lost interest in running and training for a marathon when you’re a working mom is tough. Besides, I always remembered that Phidippides, who ran the first marathon, reached Athens, shouted, “Victory.!” and died. He’d already run 280 miles and fought all morning in heavy armor, though.

The Fable of the Tortoise and the Hare
By Aesop

The Hare was once boasting of his speed before the other animals. “I have never yet been beaten,” said he, “when I put forth my full speed. I challenge any one here to race with me.”

The Tortoise said quietly, “I accept your challenge.”

“That is a good joke,” said the Hare; “I could dance round you all the way.”

“Keep your boasting till you’ve won,” answered the Tortoise. “Shall we race?”

So a course was fixed and a start was made. The Hare darted almost out of sight at once, but soon stopped and, to show his contempt for the Tortoise, lay down to have a nap. The Tortoise plodded on and plodded on, and when the Hare awoke from his nap, he saw the Tortoise just near the winning-post and could not run up in time to save the race.

Then the Tortoise said: “Slow but steady progress wins the race.”

The next time you’re in Copley Square, make sure you hunt up the Tortoise and the Hare and give them a pat. Then walk west on Boylston Street to the finish line, which is brightly painted in blue and yellow all year round. They statues remind us — and the children who climb on them — that flash and speed are not always what they’re cracked up to be. Sometimes you have to just keep plugging, endure the difficulties, and refuse to give in. That’s winning, too, just of a different kind. 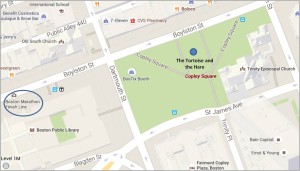 The Tortoise and the Hare are on the Boylston Street side of Copley Square in front of the fountain. You really can’t miss them. I recommend visiting on a day other than Patriot’s Day when the crowds are much smaller.

You can take the MBTA’s Green Line to the Copley station or park in the Prudential Center garage and walk up Boylston Street. If you’re going to be in the neighborhood, I recommend signing up for Boston By Foot’s Back Bay tour. It’s a great way to learn more about a neighborhood that went from mudflats to millionaires.