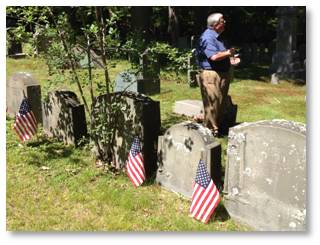 One of the things I enjoy about being a Boston By Foot docent is that it opens the door to other tours, lectures, and readings that might not otherwise have come my way. One of these happened on Saturday when I went on a tour called, “Let’s Talk About Food—Visiting Captains of Food Industries” given by author and lecturer Anthony Sammarco.

All those captains of industry were, in fact, dead and we “visited” them by covering a lot of turf in Milton Cemetery. I’d had no idea that so many people who created or were involved in the food industry came from Massachusetts in general or Milton, a suburban community south of Boston, in particular.

Unlike other garden cemeteries like Mount Auburn and Forest Hills, Milton Cemetery does not have big ostentatious tombs and ornate statues so the stories lie with the people who are interred there. Here’s who we met on the cemetery food tour, introduced by Mr. Sammarco who knows his material and does an excellent job of communicating it. 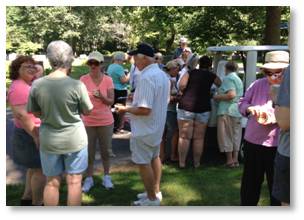 It was a hot day so we were all delighted when Ms. Desmond and Mr. Sammarco concluded the tours with an ice cream treat for everyone, appropriately enough at the Howard Johnson gravesite. I did not have chocolate.

This post gives only a quick overview of the wealth of information provided by Mr. Sammarco. He has written several books about local communities and businesses, including Howard Johnson’s restaurants. He knows pretty much anything you might want to know about his topics and answers questions at length.  You can see a list of his upcoming tours and lectures on his Facebook page at: https://www.facebook.com/anthony.sammarco.58