The structure at 10 Tremont Street was formerly known as the Hemenway Building, built in 1883 for the Hemenway Trust and designed by two principals in the architectural firm of Bradlee, Winslow and Wetherell (1829 – 1888). Upon Nathaniel J. Bradlee’s death in 1888, it continued as Winslow, Wetherell & Bigelow.

Just to add a little confusion, the firm also existed as Winslow and Wetherell and this is the partnership that designed the Hemenway Building.

The archive photo below shows the Hemenway Building as seen from the old Scollay Square with the peripatetic statue of Governor Winslow in the center. It appears as clearly the tallest building in the neighborhood. 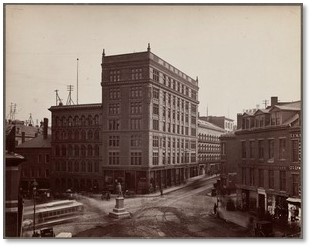 In the aerial photo below, look for the dark red rectangle on the left of Tremont Street at the top of City Hall Plaza where the two curved buildings come together. The 20th-century buildings dwarf this once-prominent structure. 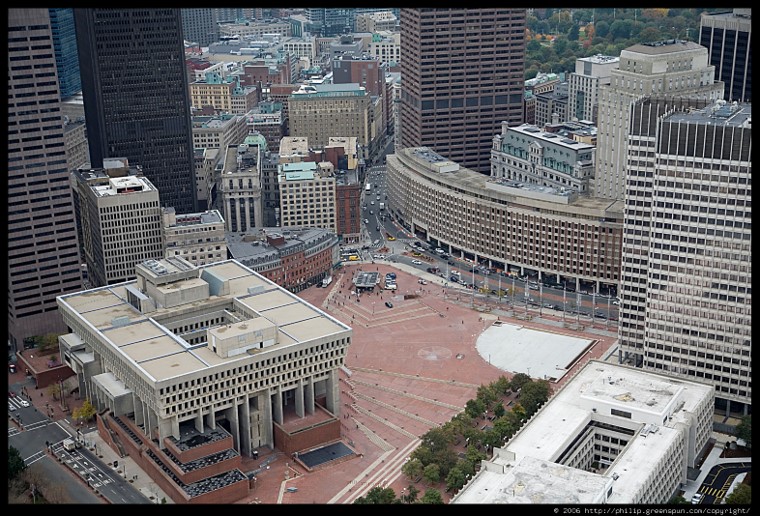 The Style and Cost

The “Massachusetts Historic Places Dictionary” defines the style as “other/Romanesque,” while the “Engineering Record, Building Record and Sanitary Engineer, Volume 11” describes the materials as “dark brick with trimmings of rough Longmeadow stone.” The Hemenway Building reportedly cost $220,000 to build—about $5,960,440 today.

The grocery and catering firm of S.S. Pierce was the first tenant and they continued to occupy the ground floor until moving to a new building, no longer extant, in the Back Bay.

Other Work by Winslow and Wetherell

The partnership of Walter Thacher Winslow and George Homans Wetherell also designed other iconic buildings in Boston. Among Winslow and Wetherell’s works were:

Winslow and Wetherell have been credited with designing many of the buildings of the Baker Chocolate factory complex in Dorchester.

So there you have it. Mystery solved thanks to Mr. Sammarco.

I see this building all the time when I park at Center Plaza (which is the curved building on the right in the aerial photo above) to give a Dark Side of Boston tour for Boston By Foot. It has always intrigued me and I’m happy to finally know its history.