The Red Sox Clinch the Pennant! 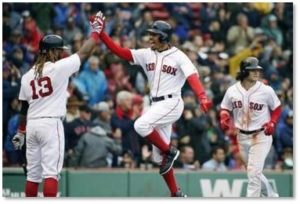 September is over and it ended on a sweet, high note Saturday as the Boston Red Sox clinched the American League East pennant for the second consecutive year. The Sox had led the division since August 2 but had slumped a bit toward the end of a long and grueling season.

The team has their work cut out for them with the Astros in the ALDS but, for now, I’ll dance like the outfield.

We were at Fenway Park on Wednesday when the temperatures felt more like August than autumn. On Saturday, the players had to slog through pouring rain when it was cold enough to see your breath. Welcome to New England. The Sox won in the heat and they won again in the cold. The baseball gods are generous.

Not so long ago (well, okay, when I was a kid), the ALDS did not exist. If a team won the pennant, it won the division and went to the World Series. No “wild card” existed. There they played the pennant winner from the other division. Whichever team won four out of seven games took home the World Series trophy. Simple.

It seems like Major League Baseball keeps adding playoff games just to earn more in revenue from TV advertising space, merchandise and other tie-ins. While this makes business sense, it extends the post-season further and further into fall. For teams that play in open-air stadiums, like Fenway Park, the playoffs can mean executing plays with numb hands and leaden feet. Fans show up in winter coats, hats, gloves, scarves and boots. The concessionaires could make money hawking foot warmers. The Red Sox have, in fact, put up a link to their apparel page with sweatshirts, hoodies and hats so fans can “Dress for October.”

Now that the cold weather is settling in, I’ll harvest the few remaining tomatoes on the vine and the peppers I have been hoping would get just a little bigger.

This is when my mother made piccalilli, a green-tomato relish with a distinctive taste. Out in Dad’s garden, we picked all the green and red tomatoes as well as the green and red peppers, filling a big bowl with the last of the harvest. My mother would buy onions and celery, mustard seed, pickling spice, vinegar and paraffin. 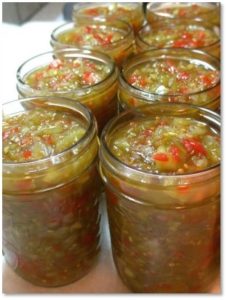 She cut up all the ingredients and then my sister and I would use a manual grinder to convert all the vegetables to a fine mince. Of all the childhood chores we did, I enjoyed this one the most. The process created a smell like nothing I have ever encountered since: green and spicy, rich and earthy all at the same time.

All the ingredients would go into a crock, mixed with spices, so the flavors could meld. When that process was complete, Mom would boil the jars, melt the paraffin and start putting up the piccalilli.

I never made piccalilli myself, even though it’s my favorite relish. As a working mother, I had neither the time for the kind of garden needed to produce the ingredients nor the time for home canning. My sister did, though. She must have Mom’s recipe.

Instead I have harvested the blog posts for last month. Seth rejoined the roster as a guest author and Susanne took a much-deserved vacation  In case you missed a few, here’s the roundup of September 2017 posts.