One of my favorite movie lines is spoken by Jeff Goldblum’s character in “Jurassic Park.” A mathematician, he says to the biogenetic scientists beavering away on bringing dinosaur DNA to life:  “Just because you could do it didn’t mean you should do it.” Company names have been omitted to protect the unimaginative.

I read in a front-page article by Christina Rogers in The Wall Street Journal headlined, “Auto Makers in Push for Patents,” that many automobile companies working on the driverless cars of the future have gone all-in developing and filing patent applications for their own hardware/software technologies. It occurred to me that, just maybe, management and tech folk have not thought through the ramifications of these new automotive technologies. What could possibly go wrong? 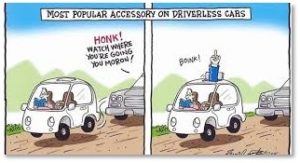 One part of today’s human driving experience likely to be affected is road rage. For example, a German car company wants to patent a new form of communication, like a product-line extension of emoticons.

It would allow passengers (I was going to say drivers, but that term would not apply) in driverless cars and pedestrians to use a combination of visual signs, beeps, and speech to communicate a variety of things.

I expect to see some courtesy, in the form of a sweeping arm gesture and a half bow, that says, “Please, go first, you have the right of way.” However, I also anticipate many new forms of the finger. Use of firearms to express displeasure will be affected, too.

Another aspect of driverless driving that will change is parking. A Korean auto maker filed a patent application for automatic vehicle parking. The driver exits the vehicle and pushes a button that activates a parking algorithm. Interesting.

I often drive in Boston, a city not known for either its polite drivers or for municipal support for driving into the city. Picture two autonomic cars vying for the same parking space. Suppose the space could accommodate only a certain size vehicle. I could sell tickets allowing passersby to watch the spectacle. An even more entertaining scene would occur in parking garages. How will the car know that someone is about to leave a parking space or that a level is full? 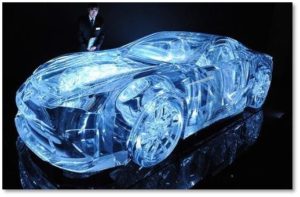 In another example of a breakthrough that could go sideways, a Japanese car company wants to patent a method of making a car’s structural components—e.g., door pillars—appear to be transparent. Should this come to pass, it would adversely impact automotive trysts and probable cause arrests, to name just two results.

The same company envisions integrating data storage and cameras to create a “road-trip” storybook. This might lead the little ones to change from their time-honored query, “Are we there yet?” to the imperative, “We’re not there yet!” 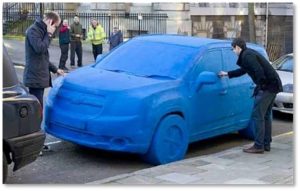 Some manufacturers see a bit further down the road than others, taking safety into account. A company better known for its search-engine technology filed a patent application for what I think of as a Play-Doh concept: Malleable car bodies for absorbing collision impacts.

Auto-body shops worldwide would have to reinvent themselves, perhaps by employing children experienced in working with Play-Doh (but, mind the laws about child labor and exploiting workers).  Hasbro, the manufacturer of Play-Doh, might see a spike in its share price.

Under a possible heading of Infinitely Replaceable Parts, one of the original American car companies has filed patent applications for in-vehicle health monitors and mix-and-match designer pedals and steering wheels. Any development to do with health, of course, will fall afoul of HIPAA, the law designed to protect patient confidentiality. I can also see that functionality, should it make its way into cars, become a prime hacking target. 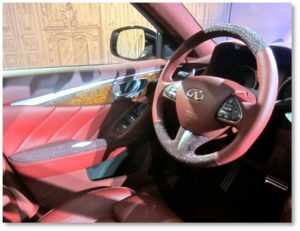 The fashion industry will jump on the replacement components bandwagon, which, if designer clothes are any indicator, would sacrifice engineering and biomechanics considerations on the altar of color, style, and fabrics. Other materials would be considered, too. And all those choices and options would have a ripple effect on many other industries.

Cosmetics, for example, would be reinvigorated by demand for products that coordinated not just with an ensemble but also with everything that could be seen inside a transparent car; no more driving—er, getting into your self-driving vehicle—in your pajamas to the grocery for a quart of milk.

Last, but certainly not least, is tech support. Here is the concern:  One of the original American auto companies has partnered with an Indian car maker. Imagine if they decide to use Indians to support American users. If you use a PC, you have likely dealt with tech support personnel in Mumbai or New Delhi. They are mostly bilingual, technically competent, and well-trained. Often, however, they receive calls from people who are not those things.  Like you and me.  This situation would make a great sitcom, sort of like “Are You Being Served?”

I am sure, if you put your mind to it, you can think of other future scenarios not considered in the filing of tens of thousands of patent applications; for example, the bumper car industry, the Interstate Highway Commission, the car rental business, and many others.

Personally, I miss a stick shift. Now, THAT was driving.