We were walking back to our car after last night’s Red Sox game at Fenway Park (they won) when we passed several students at the Berklee College of Music taking pictures of the main building. I looked up and really noticed 1140 Boylston Street for the first time.

Having graduated from Northeastern University, I was familiar with the Charlesgate section of Boston but that was long before I began paying attention to either architecture or history. Back then, that part of Boylston Street was quiet and somewhat seedy. 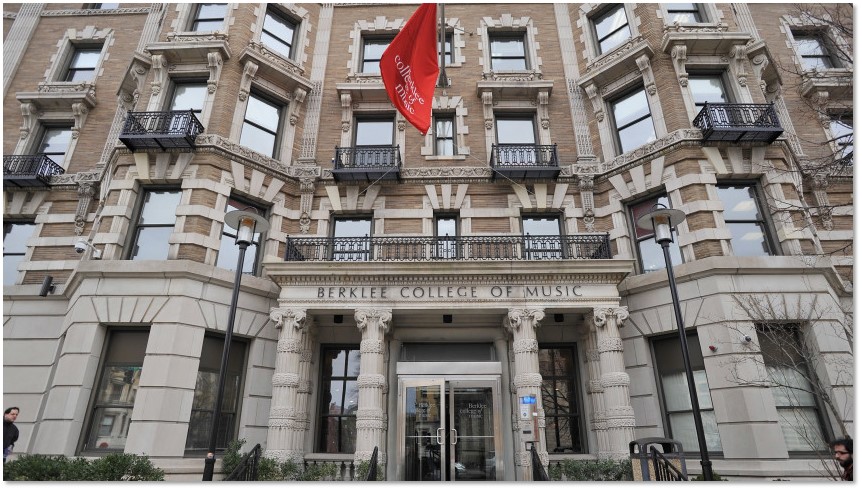 1140 Boylston Street, described as an “exuberant design” by author Doug Gelbert certainly deserves the moniker. Designed by Arthur Bowditch in 1901as the Carlton Hotel, it opened its doors to guests two years later. In 1910, the Fritz family, which owned the hotel, renamed it the Fritz-Carlton.

The United Seamen’s Service purchased the Fritz-Carlton Hotel in the 1940s and operated it as the Bostonian Hotel, a club and residential hotel for sailors in the Merchant Marine. The Berklee School of Music purchased the building in the 1960s.

Although it is said to be a replica of the fashionable Carlton Hotel in London, run by the Swiss hotelier César Ritz, I don’t see a great similarity between the two buildings.  The London hotel is a French Second Empire building while the Carlton Hotel was created as an elaborate assemblage of exaggerated Georgian elements.

Arthur Bowditch worked in a variety of styles and drew on many of them for this building. He left very little space undecorated and designed most of the ornamentation elements to be larger than life.

Huge blocks of rusticated stone form the first floor. Brick walls rise from it with bay windows pushing out onto wrought-iron balconies. Stone quoins edge each window and a grid of string courses connects them on the second floor.  Voussoirs shoot up from the top of each window like Grouch Marx’s eyebrows, giving them a look of frozen surprise. 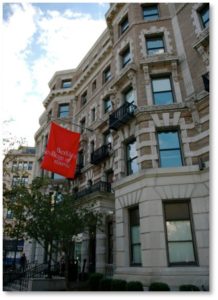 A series of round bull’s-eye windows grace the west end of the second floor, topped by large and highly carved keystones. Sharp-angled voussoirs bracket these windows like wings.

Brackets support the balconies as well as a large string course between the second and third floors. From this, pilasters with Doric capitals rise all the way to the fifth floor. A cornice tops this with dentils all around. The sixth floor rises to a simple border at the roof.

Four columns support the front portal. Carved rings band the columns in such abundance they look like burls on tree trunks. The Doric capitals sport carved laurel wreaths on each corner, as if they were stone ears with earrings.

Yet, somehow, it has a certain charm. Boston does not have a lot of over-the-top design so this one really stands out. The overabundance of design intrigues rather than overwhelms.

Arthur Bowditch was a prominent Boston architect who began his career as a draftsman in a variety of local architectural firms. He began practicing on his own in 1893. Mr. Bowditch designed the Carlton Hotel in 1891, however, so he must have been more than a draftsman at the time. From 1903 to 1907 he worked in partnership with Edward Bowman Stratton in the firm of Bowditch and Stratton but otherwise seems to have practiced alone. 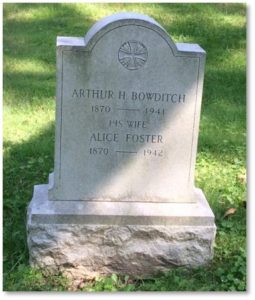 His body of work includes the Hotel Somerset on Commonwealth Avenue, the Charlesgate East apartments in the Fenway, the Paramount Theater on Washington Street and the Old South Building between Milk Street and Water Street. Other hotel designs include the Lenox Hotel and the Essex Hotel.

The largest and most elaborate building Mr. Bowditch designed appears to be Stoneholm, the chateauesque apartment building in Brookline. This French Renaissance-inspired enormity looks to me like Boston’s version of the Dakota in New York City.

Arthur Bowditch died in 1941 and is buried in Walnut Hills Cemetery in Brookline. The gravestone for Mr. Bowditch and his wife, Alice Foster Bowditch, is small, unassuming and very simple.

The Berklee School of Music has expanded into many of the local buildings over the years and built a beautiful new one around the corner on Massachusetts Avenue. The college has turned this end of Boylston Street into a vibrant neighborhood. Mr. Bowditch’s Georgian extravaganza gives the school a dramatic flourish that seems appropriate for a performance-oriented college.

1 thought on “Arthur Bowditch and the Berklee College of Music”