This is the fifteenth post in a series on Boston’s Hidden Gems. 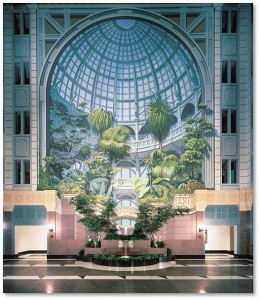 Winter in New England is an unpredictable thing. It comes late and stays late. It arrives early, goes away and comes back again. Winter delights in conning us into thinking that spring is here, then rushing back to drop snow on our daffodils. My husband jokes that we only have two seasons: Fourth of July and winter. It’s not that bad, of course, but it can be discouraging.

That’s why some buildings create internal gardens, places where warmth, humidity, and green smells refresh our senses, straighten our spines, and put smiles on our faces. Such garden courts are expensive, however, and take up room. The plants require watering, feeding, and pruning. Sometimes they make a mess.

It’s much simpler to create a trompe l’oeil garden, one that gives the perception of greenery without the fuss and complications. That’s what the designers of 101 Merrimac Street have done.

101 Merrimac Street is an office and medical center structure that was designed by The Architects Collaborative. Its brick and granite exterior is “reminiscent of the elegant historic facades of the Bullfinch Triangle to which it belongs.” Inside is an emerald hidden gem that Charles Bulfinch would not have imagined.

This vertical garden mural is six stories high and takes up one entire wall of the building’s multi-level atrium. It draws us into a Victorian crystal garden with a multitude of tropical plants growing in front of elaborate arches and balconies, under an ornate glass dome. A fountain runs down and wild animals peer from between the branches. At the mural’s base, a real fountain, bracketed by real trees, provides the garden music of tinkling water. 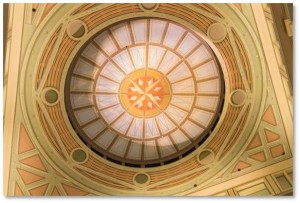 Tables and chairs are scattered across the atrium’s marble floor so visitors can sit and have a coffee or eat their lunch while appreciating the vertical garden. Study it carefully. What’s a real shadow and what is painted? Which architectural motifs are real and which are false? Where does the faux water begin flowing for real? And how does the artist do that, anyway?

Next, look up and you’ll see another mural on the ceiling that adds the illusion of a light-filled dome surrounded by eight medallions with a compass rose at the center.

Both paintings were done by Richard Haas, a New York artist known for fool-the-eye interior and exterior murals that have made buildings, mostly in the United States, more attractive and interesting.

Paul Goldberger, the architecture critic of Vanity Fair, said of him, 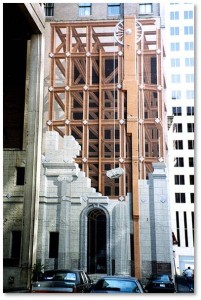 Mr. Haas was born in Spring Green, Wisconsin, home of architect Frank Lloyd Wright and the location of his home and studio, Taliesin. His uncle was a stonemason for Mr. Wright and he visited and worked at Taliesin as a teenager. He graduated from the University of Wisconsin and received an M.F.A. from the University of Minnesota. He taught at Bennington College in Vermont before embarking on his career as a muralist. Mr. Haas has completed more than 120 murals, both interior and exterior and has received many awards for his work.

The vertical garden at 101 Merrimac Street is not Mr. Haas’s only work in the area. He also painted the mural on the west facade of the Boston Architecture Building on Hereford Street in the Back Bay, in which “the back of a “brutal style” building became a cross-section cutaway of an 18th Century pantheon.” Locally, he also painted the Venetian façade in the atrium of Cambridge’s Hyatt Regency Hotel and the exterior mural of a building under construction at 31 Milk Street. 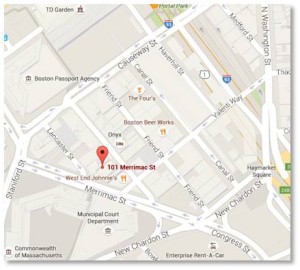 101 Merrimac Street is open Monday through Friday from 7:00 a.m to 6:00 p.m. There is a garage in the building that is open in the evenings and on weekends when there is an event in the TD Garden nearby. Both the MBTA’s Orange and Green lines have stops at North Station. From there it’s a short walk to Merrimac Street.