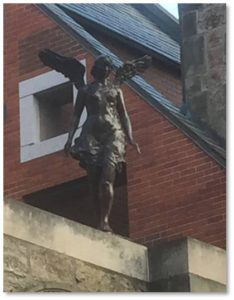 When I started my holiday series on Boston’s angels back in December of 2015, I did not realize just how few public statues of angels exist in Boston. Outside of churches, as well as inside many of our more austere houses of worship, the city is angel challenged

It comes as a surprise, therefore, to find an angel atop a building that used to be a church but is now condominiums while two of the church’s original angels flew away to Worcester.

In time for the holidays, here is the story of the Church Court Angel.

A group of Bostonians organized the Mount Vernon Congregational Church in 1842 to lead in the “fight against indifference and Unitarianism.” The members constructed a house of worship on Beacon Hill’s Ashburton Place the following year. Like many other institutions, they moved to the Back Bay after the New Land had been created and notable families were constructing homes there. Charles Howard Walker, of Walker and Best architects, designed a new church building on the corner of Beacon Street and Massachusetts Avenue that was completed in 1892.

The new church included murals of Christ and the Four Evangelists, by Edward P. Sperry from the late 40s to early 50s that stood behind the altar as well as several important stained glass windows made by John La Farge and Louis Comfort Tiffany:

It honors the memory of Dr. James B. Ayer, a longtime deacon of the Mount Vernon church and a noted physician, who died in 1891 after a prolonged illness. According to Elizabeth Athens, Assistant Curator of American Art for the Worcester Art Museum,

“The subject of faith and healing draws together these two aspects of Ayer’s life in a complex composition that tested La Farge’s skill. Indeed, two years separated the design of the left and right lancets, during which he constructed a pool in his studio, the better to capture the reflections and refractions of the troubled waters. Fortunately, the Worcester Art Museum also owns the watercolor sketches La Farge made for these lancets”.

The Angel of the Resurrection

The Back Bay Church Burns

The Mount Vernon Church’s congregation declined as families moved to the suburbs in the 1950s and they began worshiping in fellowship with the Old South Church in Copley Square. The membership closed the Back Bay building in 1970 and it was boarded up.

On July 20, 1978 a five-alarm fire destroyed much of the church on Beacon Street. Only the shell remained, including the original church doors on Beacon Street as well as some of the stone arches and towers. Fortunately, the stained-glass windows had been removed earlier and sent to other locations.

The Church Angels Fly Away

The Angel of the Healing Waters and The Angel of the Resurrection sets were crated and transported to the Worcester Art Museum as a gift. The museum’s then-conservator, Edmond de Beaumont, assessed the lancets but no treatment followed. They remained crated and in storage for over forty years.

Ms. Athens reassured me that,

“The windows are now in the care of stained glass conservators, who will treat the objects in advance of their display. A special exhibition of the four lancets—along with other key works by La Farge and Tiffany in the Museum’s collection, including La Farge’s experimental Peacock Window is planned for June 2018. It’s been a thrilling project to coordinate, to say the least, since it’s not often that one comes across a pair of masterworks by key innovators in American stained glass.”

Christ with Two Pilgrims is now at the James C. Nicoll, Jr. Chapel at The Overlook Assisted Living Retirement Community, (also known as the James Parker Masonic Home) in Charlton, MA. The Museum of Fine Arts, Boston has a detailed watercolor study for this window from 1896.

Church Court Rises from the Ashes

In 1983 architect Graham Gund purchased the church’s remains and the former rectory then remodeled them into the Church Court Condominiums. This seven-story luxury building has two L-shaped structures around a central garden courtyard where the sanctuary once stood. Church Court’s 38 units, which  sell for a million dollars and up, include an unusual vertical condominium in the former bell tower. 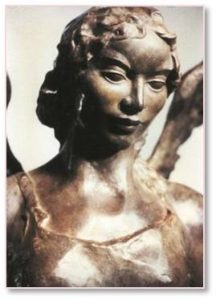 One might think the Church Court angel a sacred object that survived the fire and was re-purposed as a decoration for the condominiums. In fact, however, Mr. Gund commissioned the statue and placed her on the courtyard wall along Massachusetts Avenue. Sculpted by Gene Cauthen, the angel stands five feet, six inches high.

She faces northwest and the wind rumples her rather modern short skirt. Unlike the Public Garden’s majestic Angel of the Waters (now under wraps for renovation), the Church Court Angel has stubby wings that would be unlikely to carry her sturdy body any great distance.

Still, she is an intriguing and somewhat surprising sight when viewed from the street.

Directions and Information to the Church Court Angel 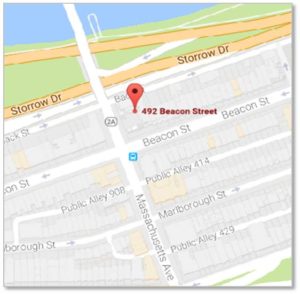 Because Church Court is a private residence we can’t enter the courtyard but we can see the Church Court Angel from Massachusetts Avenue quite easily. Just walk alongside the surviving stone wall of the church and look up.

You may be fortunate enough to score one of the few metered parking spaces available on Massachusetts Avenue but don’t count on it. Beacon Street, like most of the Back Bay, has Resident Permit Parking only. Put your car in the Prudential Center Garage and walk up Mass Ave or use one of the private lots in Kendall Square and walk along Commonwealth Avenue to Mass Ave.

The nearest MBTA stops are on the Green Line at Kenmore and Hynes Convention Center. You will have a short walk from there to the corner of Beacon Street and Massachusetts Avenue.