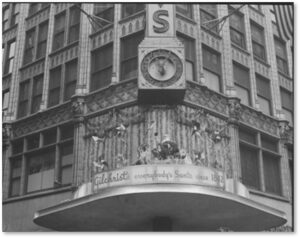 After writing last week’s post on architectural decorations, I became interested in the old Gilchrist Department Store building with its crouching gargoyles. Unlike many of Boston’s less-fortunate commercial structures, it still stands but has been disguised at street level by gaudy signage. That makes it easy to walk past without recognizing the former store’s architectural heritage.

For more information, I turned first to my shelves of books about Boston, from its buildings to its gardens, but found little to go on. Gilchrist’s seems to have flown under the city’s architectural radar. Even the “AIA Guide to Boston,” both print and online, overlooks Gilchrist’s. Next, I searched the internet, where nothing ever dies, and found a little more. Here’s the available scoop.

Gilchrist’s Department Store first opened in 1842 just north of where the main store was erected on Winter Street. The business began with George Turnbull, a Scottish entrepreneur who opened a dry goods store in downtown Boston in the 1840s. 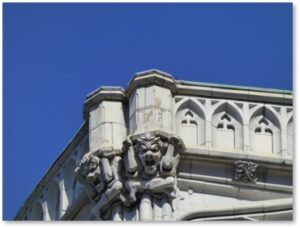 Robert Gilchrist, began working as a clerk at Turnbull’s store. He became a partner when Turnbull retired in 1855. Richard, and eventually John Gilchrist. managed the store jointly until Richard’s death in 1893. John Gilchrist then became its sole proprietor.

Under his leadership, the store continued to grow until, by the end of the nineteenth century, it began a major expansion. In the 1940s, the company branched out into established suburban communities. By 1964 had eight locations across Massachusetts.

The newfangled shopping malls drew shoppers away from department stores in the seventies, however. Gilchrist’s held out until 1977, when it finally closed.

Gilchrist’s flagship store rose in 1899 next door to the original structure at the corner on of Winter and Washington Streets. Local, Harvard-educated architect, Richard Clipston Sturgis designed it in a commercial style with Gothic ornaments. Mr. Sturgis was the nephew of noted architect John Hubbard Sturgis. (Oddly enough, though, the Gilchrist’s store isn’t listed among his works as an individual or for the firm of Sturgis and Brigham where he worked.) 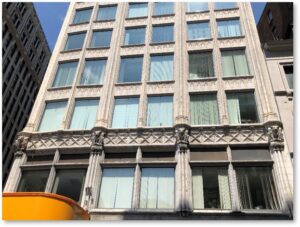 For Gilchrist’s proud new store, Mr. Sturgis followed client John Gilchrist’s direction to maximize natural light. This became a defining feature of the building, which came to be known as the Daylight Store.

A contemporary Boston Globe account reported on April 2, 1900, that the store was a marvel to behold.

“Gilchrist & Co. threw open the doors of their great new store this week and bid the public enter into the enjoyments of its elegance, its comfort, and its benefits as a place of trade for man and woman. The first floor is flooded with sunlight. So is every one of the five floors for that matter. The rays, unobstructed, shoot in from the front, which is all glass, from the rear, which has many windows, and down from above through a well, which descends from the roof clear to the ground apartment. No electric lamps are lighted in the daytime”

With its flagship store across the street from Filene’s and Jordan Marsh, Gilchrist’s made up the Big Three department stores that drew shoppers to the intersection we now call Downtown Crossing. 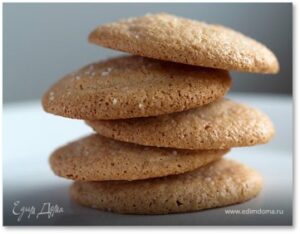 While neighbor Jordan Marsh drew fame for its blueberry muffins, shoppers went to Gilchrist’s for its almond macaroons. Only a distant cousin of fancy French macarons with their exotic flavors and penny-candy colors, these cookies created a following for their substantial size and extra-chewy texture. They looked more like sugar cookies than bon-bons.

Epicurious provides a recipe for Gilcrhist’s macaroons should you care to recreate these treats yourself.

After the flagship store closed, a shopping mall called The Corner took over the building at 1 Winter Street. The Gilchrist’s sign with the clock at the bottom that ran vertically down the structure’s corner disappeared. It joining the unfortunate assemblage of Boston’s vanished neon. 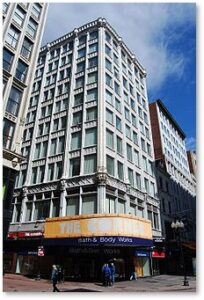 A big orange marquee with Peter Max lettering obscures the store’s original canopy at the corner of Washington and Winter Streets. Like those of Filene’s and Jordan’s this canopy sheltered shoppers from the rain and held elaborate Christmas decorations during the crowded holiday shopping season.

The inside of The Corner Mall contains over 15 stores, boutiques, and fast-food restaurants. Ironically, the interior space is now very dark and claustrophobic with low ceilings and blue neon lights. To my mind, it has all the charm and elegance of a commercial parking garage. Eating there holds no appeal.

The rest of the 10-story building now consists of office space.