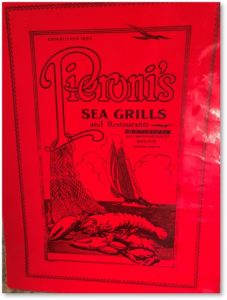 When I was a kid, we did not go to Boston often. For one thing, it was a 50-mile ride from Somerset MA. For another, taking all six of us anywhere could be an expensive proposition.

We also did not eat out often. Back then, fast food franchises did not exist and no one had even thought of casual fast-food restaurants. Eating out meant a restaurant where we four kids had to be on our best behavior and the check was substantial. (More on that later.)

Going to the Big City

Yet we did go to the big city occasionally because our parents tried to show us new things and educational places.

As far as I know, we didn’t ever see a game at Fenway Park and Quincy Market was still a commercial enterprise, not a festival marketplace. My older siblings have refreshed my memory of where we went. The destinations included:

When we went to Boston, we ate out. While my brothers remember Jimmy’s Harborside, I don’t. We did slog through the discarded produce to eat at Durgin Park when it still catered to workingmen instead of tourists. 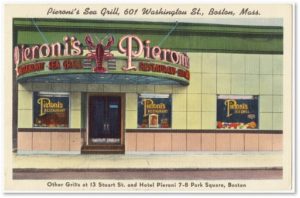 The restaurant I remember most vividly was the Pieroni’s Sea Grill at 601 Washington Street in the area now known as Downtown Crossing. It would have been down the street from the Cinerama theater, no longer extant. This week I was cleaning up a box of papers when I found an old menu from Pieroni’s. What a flashback in time.

The building no longer exists: it was replaced by new construction long ago. Originally, there was more than one restaurant in this group. The story behind the hotel and three restaurants is the familiar one of an immigrant who comes to America, works hard, and makes good.

In 1890, 15-year-old Giuseppe Pieroni left Barga, Italy, and came to Boston with a knowledge of English (thanks to his father) but short on money. He took a job washing dishes in the basement of a restaurant on Washington Street.

It took him two years to work his way up to Second Chef de Grille and another year to make him Premier Grilleur in a Tremont Street restaurant. He was only 18. His three brothers joined him and together they used their spare time and Sundays off to sample and compare the dishes from other establishments. 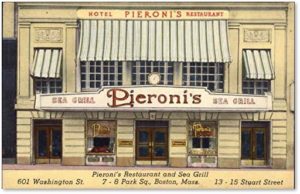 In 1894, the brothers opened Pieroni’s Sea Grill on Beacon Street, venue that drew customers with a “secret seafood sauce.”

This venture proved so successful, they moved to a 700-seat restaurant on Eliot Street, then added the 1200-seat place on Washington Street. A 600-seat establishment at 13-15 Stuart Street in the Theater District came next. In 1919, the brothers opened the Pieroni Hotel on Park Square, which earned a gold medal in Nice in 1930.

The Pieroni brothers did not attempt to lure patrons with signature dishes from their Tuscany region of Italy. Instead, they gave Boston’s diners what they were used to and what they wanted: seafood (especially lobster), beef, pork, lamb and poultry. Desserts included such all-American items as ice cream, Jello and pudding. The deep fryer took the place of a sauté pan and, by the 1950s, mayonnaise had replaced the secret seafood sauce.

The Boston Chamber of Commerce elected Giuseppe Pieroni its president in 1925. With the fortune made from his restaurants, Signor Pieroni built the luxurious Villa Pieroni in Tuscany, 20 miles north of Lucca, which was completed in 1911. Unfortunately, he did not get to retire there. Giuseppe Pieroni died suddenly on the job in one of his restaurants on February 25, 1944.

In his life, he amassed stature and prominence and gave jobs in his restaurants to over a thousand people from Italy’s Serchio Valley. I have not been able to locate his grave.

So, what did we eat at Pieroni’s Sea Grill? Dining out in Boston was a different experience back then.

I have the lunch menu, which is extensive, with meals ranging from Welsh Rarebit ($1.25) to Lobster Salad with Mayonnaise Dressing ($3.70). The most expensive item is the Roast Prime Rib of Beef meal, which included tomato juice, soup or chowder, the prime rib, choice of potato and vegetables, dessert, and tea or coffee for $4.50. A one-pound Broiled Live Lobster with drawn butter, fries or baked potato, rolls and butter, and beverage went for $2.50. 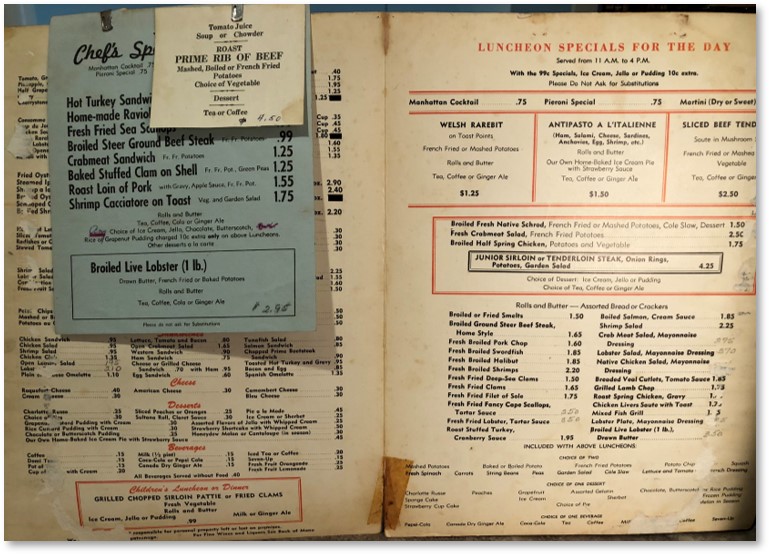 Should you want wine with your meal, you could order a bottle of imported Bordeaux, Orvieto, or Chianti for $3.50 or Burgundy for $2.00. No vinyard or vintage specified. A variety of beers would set you back from $.35 to $.65 a glass.

The Pieroni’s Sea Grills are Gone

If these prices seem ridiculously low, remember that wages were equally low in the fifties and early sixties. A minimum-wage salary brought in $50 a week before taxes and $35 after taxes. A man making $10,000 a year was doing very well and an expensive house cost $40,000. It’s all relative.

None of these restaurants exists today, of course. The Massachusetts Transportation Buildings stands on the site of the old hotel and a shopping mall replaced the Washington Street establishment. To estimate today’s prices at most of Boston fine-dining establishments, just add a zero—or more—to the Pieroni’s prices.

Getting More for the Money

You got a lot more food for the money back then, too. No restaurateur of the fifties would have dreamed of serving three scallops on a plate with two stalks of asparagus and a squirt of potato puree and calling it dinner for any price. No one worried about fancy plating or organic ingredients, either. People came to restaurants to eat and they were happy if they left with a well-cooked meal and full stomachs.

Today, Boston’s dining scene features celebrity chefs, recipes from all over the world, farm-to-table ingredients, fusion cuisine, and craft beer. Chefs like Tiffani Faison, Ken Oringer, Barbara Lynch, and Jason Santos have probably never heard of Giuseppe Pieroni but they have built on the achievements of men like him, visionaries who paved the transition from eighteenth-century food scene to the twenty-first.

16 thoughts on “Pieroni’s Sea Grill: Gone but Not Forgotten”