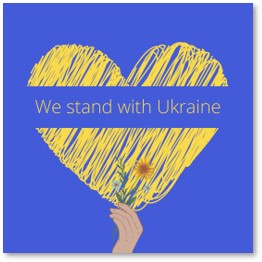 I have written several times about the high cost of war but never has that been more evident than what is happening in Ukraine today.

War has a huge impact on many things, living or not, but that impact often goes unexamined. Fortunately, the global sanctions against Russia, the unified opposition to Russian aggression, and the 40,000+ International Brigade of volunteers from many countries have brought these costs to the fore.

Just to be clear, war benefits only those who make money from weapons, vehicles, ammunition, and other businesses that comprise the military-industrial complex.

The day-to-day reporting on wars usually focuses on people because human beings bear the most obvious burdens. Refugees flee the country, often breaking up families. We see this In the Ukraine war as the men return to fight for their country. This war, like all others, has a deleterious effect on: 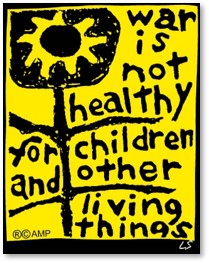 Children, who are orphaned, mutilated, starved, and murdered by the fighting or even targeted by the enemy as a way of spreading terror.

Women, who are widowed, raped, mutilated, starved, and murdered either as the “spoils of war” or as a way of demoralizing male civilians.

Men, who fight and die, become prisoners of war, or are summarily executed in violation of the Geneva Accords.

The cartoon character Daddy Warbucks pointed out that many fortunes had their foundation in supporting wars. We often think war is good for business, because we see the profiteering done by investment banks along with suppliers of munitions, arms, and military services. Outside the military-industrial complex however, war has a really bad effect on:

Business, as we are currently seeing. Over 200 companies of all types have closed their Russian locations or canceled their investments. Russians can no longer get coffee at Starbucks or burgers at McDonald’s. Social media, including Facebook and Twitter, have shut down. These withdrawals matter because they have an impact on corporate profits but also because they make a statement about what is and is not acceptable behavior. 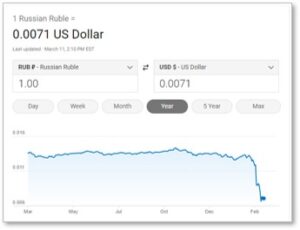 Economies, most evident in Russia. With their economy is in turmoil, the government describes the sanctions as having a “shock impact.” The Russian Stock Exchange has been closed since February 25.

The ruble’s value has declined so far that one ruble is currently worth .0071 of a dollar. Russia’s economy will likely take further hits now that the United States has banned imports of Russian energy, one of the country’s largest sources of income. Germany halted the NordStream 2 Pipeline, reducing Russia’s future income.

Globalization, as if we didn’t already know this. The weaknesses and vulnerabilities of global supply chains proved to be systemic, resulting from decisions based on assumptions that a supply chain maximized to exploit cheap labor would be strong enough to weather any crisis. The pandemic exposed this short-sighted approach and the war has made it even more obvious. Take Aeroflot, the Russian national airline, for example. Not only are sanctions preventing them from flying internationally but they can no longer get the spare parts needed for routine maintenance on domestic flights.

War: Bad for the Planet

We tend to ignore impacts that don’t affect human beings first and foremost. But war does bad things to other creatures, and even the world we live on. We often overlook these consequences because no one speaks for them. In “Thoughts on the Heavy Costs of War,” I wrote about France’s Red Zone: 460 square miles of countryside rendered uninhabitable by WWI, which ended 104 years ago. The Red Zone highlights that war has an impact on:

Wildlife, as animals get blown up, shot, and run over. Even if they avoid those fates, their habitats disappear, torn up by tanks and exploded by bombs. Bio-weapons could poison tracts of land, sometimes for decades. Shell casings and unexploded ordnance pose the threat of metal poisoning. Mines destroy any animal unfortunate enough to stop on one. 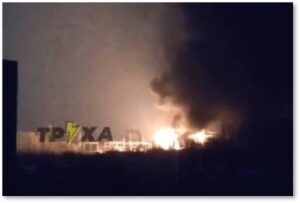 Climate Change, which is in bad enough shape. But war emissions from bombs and shelling put smoke and contaminants into the air. Russia’s invasion of Ukraine also causes air, ground, and water pollution that will be long-lasting.

Damage to or disruption of energy or industrial facilities can cause environmental emergencies. Even after the war, the country—and even the region—will likely suffer from weakened environmental oversight as the government faces multiple crises.

Life on Earth, as Russia threatens a nuclear offensive. We have not seen a nuclear threat at this level for decades. WWIII may already have started. Russia is a nuclear power. Ukraine has multiple nuclear power plants and Russia has already bombed the one in Kharkiv. One tactical nuke could start a chain of reprisals that makes Planet Earth uninhabitable.

Once again, the world finds itself in a greater conflict—as opposed to the lesser ones in Yemen, Syria, and the Congo for example. Although the world has united on the side of Ukraine, only one man started all of this trouble. Vladimir Putin has a grandiose vision. He thought he could achieve that goal with a new blitzkrieg of rolling through Ukraine the way Hitler rolled through Poland.

The valor and determination of the Ukrainian people have proven him wrong. Yet here the world sits, in the midst of a hot war and on the brink of a nuclear disaster. Because of just one man. Think about that.