I like to tie at least some posts about Boston to holidays and other significant events. When it comes to Christmas, however, I run into problems thanks to the city’s Puritan origins. I did, however make an interesting discovery about how Unitarians helped bring Christmas to Boston. 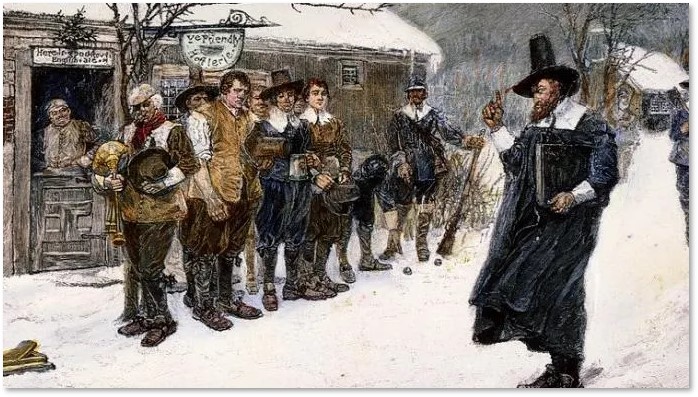 Boston only goes back as far as 1630 but the dour and godly men who settled here banned the celebration of Christmas in Boston from 1659 to 1681. That’s 22 years when Christmas was officially just another day. Shops and schools remained open while churches were closed—unless of course December 25 fell on the Sabbath, as it does this year.

It Started in England 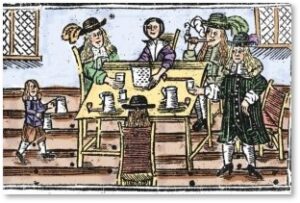 This distaste for Christmas actually began in England after the Puritans there overthrew King Charles I in 1649 and cut off his head. Parliament then decreed that December 25 should be a day of “fasting and humiliation” for Englishmen to account for their sins. No wassailing for them. Or figgy pudding, either

In 1659 the General Court of the Massachusetts Bay Colony ruled it a criminal offense to publicly celebrate the holiday, declaring that “…whosoever shall be found observing any such day as Christmas or the like, either by forbearing of labor, feasting, or any other way,” was subject to a five-shilling fine.

There were few merry gentlemen back then..

The Puritans had their reasons and you may find them surprising. In the seventeenth century, Christmas celebrations tended to be raucous, riotous, and ribald. They tipped more toward Roman Saturnalia than sacred Christian observance. That made them more pagan than Christian to Boston’s founders. Plus, the Bible holds no mention of Christmas celebrations. 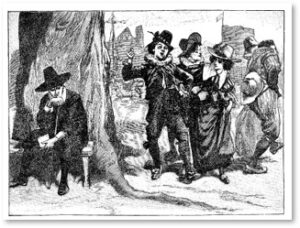 The Puritans only repealed their more intolerant laws reluctantly during the reign of King Charles II under threat of losing their royal charter. Just because the observance was then legal, however, doesn’t mean it was popular or even accepted.

Boston clings to its traditions and the refusal to observe Christmas in public lasted well past 1681. It became a public holiday only in 1870, alone with Thanksgiving and Independence Day.

What Drove the Change

It wasn’t until the nineteenth century that Bostonians embraced the public celebration of Christmas. That raises the question, “What changed?” Why did the stubbornly traditional people of Boston suddenly embrace Christmas as a public holiday? 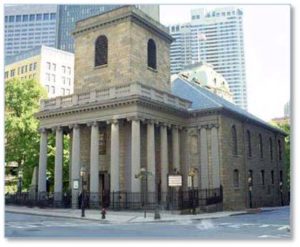 It’s interesting to note that modern Christmas traditions came to us not from the Catholic Church via the city’s multitude of Irish and Italian immigrants. Neither did Phillips Brooks, rector of Trinity Church and author of “O Little Town of Bethlehem,” start a trend.

Instead, we can thank the Unitarians for introducing the holiday’s celebrations. They did it not to stir greater religiosity but because it promoted the fundamental Unitarian values of generosity, charity, and social good. 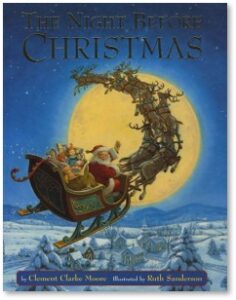 In the 1800s, the city’s Unitarians were cultural leaders and modernizers. They were typically well educated and often wealthy, holding a position of status. In addition, they had access to and control of many popular publications, which gave them a communications platform. These influential Unitarians included:

You can read more interesting details about these achievements in “Unitarians’ Influence on How Americans Celebrate Christmas Today” by Lynne Quinto.

You can see the contradiction here. Unitarians (and I am one) don’t believe in the Holy Trinity. In fact, we require no faith and don’t embrace any dogma. You can believe Jesus is God if you want to but, if you do, there are so many other congregations that would be a better fit.

The seven beliefs of Unitarianism actually require little in the way of faith:

Remember those seven points when you ponder how Unitarians, who don’t worship Jesus, contributed substantially to bringing Christmas to a city founded by people who did worship Jesus but banned public celebration of his birth.