At this time of year, we hear Christmas carols everywhere. They play in local stores and shopping malls, in restaurants and supermarkets, in car dealerships and coffee shops, in public squares and in churches. Yet seldom do we know much about the origins of these ubiquitous tunes. Certainly most people walking through Boston’s Copley Square would be surprised to hear that there is a connection between Trinity Church and the popular carol, “O Little Town of Bethlehem.” 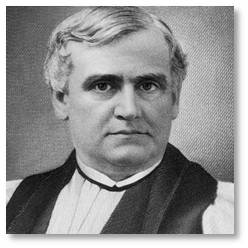 Phillips Brooks, was a clergyman and author who had an enormous impact on the people of nineteenth-century Boston while he served as rector of Trinity Church and as bishop of the Episcopal Diocese of Massachusetts. His story demonstrates the value of overcoming failure, reinventing oneself and making the most of your gifts.

Rev. Brooks was one of six sons of William Gray Brooks and Mary Ann Phillips. In his pamphlet, “A Short Life of Phillips Brooks,” William Lawrence describes the man’s Yankee pedigree with tongue firmly in cheek: “His father was a Brooks of Medford, of the best Massachusetts stock, and his mother was a Phillips of Andover, than whom there was nothing finer.”

Phillips Brooks graduated Harvard University and he taught at the Boston Latin School but failed dismally in that position and was asked to leave. He turned from academia to the clergy and graduated from the Virginia Theological Seminary in 1860. His first position was as rector of Holy Trinity Church in Philadelphia where he acquitted himself well for eight years. He became a greatly admired preacher and championed emancipation and the right of freed slaves to vote. Under his leadership, the congregation thrived. After the Civil War, he took a trip to Europe and the Middle East, which was then known as the Holy Land.

During Christmas week of 1865, he and a traveling companion had an early dinner and then mounted their horses for a two-hour ride to Bethlehem. In a letter home he described it as, “. . . a good-looking town, better built than any other we have seen in Palestine.” He continued, “Before dark, we rode out of town to the field where they say the shepherds saw the star. It is a fenced piece of ground with a cave in it (all the Holy Places are caves here), in which, strangely enough, they put the shepherds. The story is absurd, but somewhere in those fields we rode through the shepherds must have been. . . . As we passed, the shepherds were still ‘keeping watch over their flocks or leading them home to fold.’” 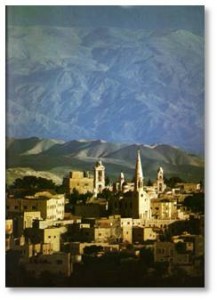 Three years later, Mr. Brooks responded to an offer from Lewis H. Redner, the Sunday school organist at Holy Trinity, who said that he would compose music for a carol if Mr. Brooks would write the words. Mr. Brooks remembered that Christmas visit to Bethlehem and penned the four verses we sing today. The carol begins with a simple, yet poetic, description of the town:

“O little town of Bethlehem,
How still we see thee lie;
Above thy deep and dreamless sleep
The silent stars go by”

“O Little Town of Bethlehem” was first printed in the program for the Christmas service of the Church of the Holy Trinity’s Sunday School and sung there on Christmas Day of 1868. It gained popularity based on the combination of Mr. Brooks’s simple but lyrical words and Mr. Redner’s beautiful music.

A Man of Great Stature

Phillips Brooks’s work at Holy Trinity and his growing reputation as a preacher made him the logical candidate to take over Boston’s Trinity Church when the Episcopal Bishop left due to ill health. The wardens campaigned to have Mr. Brooks accept the position but had little to offer a man of his growing stature and reputation. As William Lawrence describes it, Trinity had: “A down-town, substantial but rather gloomy stone church; an even more gloomy chapel; a small Sunday school and a company of loyal Churchmen, most of whom were of middle age or well along in years.”

That gloomy church was a granite structure, designed in the Gothic style and located on Summer Street. Although in downtown Boston, this was no longer an advantageous location. William Lawrence explains, “Business had moved up from the harbor; blocks and shops surrounded the church, dwelling houses had been torn down and gardens desolated.” Most parishioners had moved to more convenient or attractive churches on Beacon Hill while some had begun settling the “new land” being created in the Back Bay. 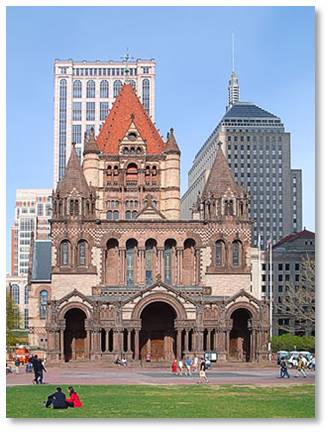 To no one’s surprise, Mr. Brooks turned down the offer. The wardens of Trinity Church persisted, however, and succeeded in their campaign when Phillips Brooks finally returned to Boston in 1869. He immediately began reviving the congregation and succeeded so well that they soon outgrew the existing church.

After three years, Mr. Brooks purchased the land in Copley Square where Trinity Church now stands. It was a prescient move as the Summer Street building burned to the ground in the Great Fire of 1872.

Phillips Brooks went on to have an even more illustrious career in Boston as a charismatic preacher who was called to speak at local congregations, lecture halls, and colleges. His stature among the people of Boston was as great as his size: Mr. Brooks stood six feet, four inches tall and weighed 300 pounds. In 1891 he was elected Bishop of the Diocese of Massachusetts but did not hold this position long. He passed away suddenly in 1893 after a brief illness, when he was only 57 years old.

There are many reasons for us to remember Phillips Brooks and many of his accomplishments to appreciate. The building of Trinity Church is the one that is most important to me, as the church is  the first building on my @BostonbyFoot tour of the Back Bay. Although I describe that amazing structure in detail, there’s never enough time to do it justice.

But whenever we hear–or sing–“O Little Town of Bethlehem,” we can think of Phillips Brooks riding into Bethlehem at night to see where the shepherds had kept their flocks on that cold winter night.

2 thoughts on “Phillips Brooks and the Christmas Carol”