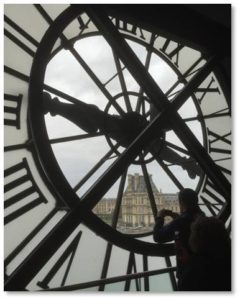 I don’t know about you but I feel as if time is speeding up. That’s impossible, of course, as Albert Einstein reminds us in the first episode of Genius. Time proceeds at a steady rate but our perception of it does not. A day on the beach flies by in an instant but an hour in the endodontist’s chair takes a week to pass.

I try to avoid politics in The Next Phase blog but sometimes it just intrudes. The last five months have felt like five years of waiting for yet another root canal.

I don’t want to know what’s happening in politics at the same time I follow the news obsessively for the latest developments. Bill Maher jokes that CNN is going to change its “Breaking News” banner to one that reads, “He Said What Now?” Rachel Maddow   connects the dots better than anyone else but I don’t have five hours a week to watch her show so I watch now and then.

In “Just a Song Before I Go,” Crosby, Stills & Nash sing, “Traveling twice the speed of sound it’s easy to get burned.” That’s certainly how I feel. And it’s ongoing.

Still, despite the turmoil and confusion, the constant shifting of the ground under our feet, Susanne and I have continued to write. In May we covered a pretty broad range of topics. I started a new series on how some of Boston’s streets got their names while Suze took on Net Neutrality and prescription drugs.

Here’s the roundup of May 2017 posts so you can catch up on what you may have missed while government was turning topsy turvy.. Plus I added a short story, “Voices in the Dark,” to the website and will post another one this month. Enjoy.

Now that summer is here I hope we can catch our collective breaths and enjoy ourselves. I don’t think that time will slow down soon, though.