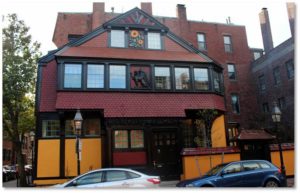 The Sunflower Castle looks out of place among the staid brick dowagers of Beacon Hill and the glittering shops of trendy Charles Street a block away.

it almost seems like a pocket of sunlight—cheerful and whimsical—amid the darker brick buildings around it on Beacon Hill Flat.

But what is Beacon Hill Flat? Isn’t that an oxymoron? How can a hill be flat?

Technically, Beacon Hill Flat is made land that was constructed in the nineteenth century. When the Puritans arrived in 1630, Beacon Hill ended in a steep bluff just east of Charles Street. This section, which lies between Cambridge Street/Longfellow Bridge on the north and Beacon Street on the south, used to be part of the Charles River with mud flats exposed at low tide.

As the city’s expanding population needed room, they turned to the tidal mud flats below the hill. Planning to fill the area got underway in 1796 but, for several reasons, the actual filling did not begin until 1803.

This project, one of the first large-scale land-making projects in Boston, cut down the top of Mount Vernon — one of the three peaks on the Tri-Mount — and moved it to the mud flats. This area was bordered by an abutment of pilings to retain the fill. Additional fill came from mud dredged from the Charles River. Almost 200 “pick and shovel” men, along with teams of oxen, spread the fill until it ranged from six to fourteen feet across the flats.

The newly made section of the city became home to tradesmen such as blacksmiths, shoemakers and stable owners. It was also the location of a bath house, “Beaman’s Baths,” for many years. The Flat of Beacon Hill housed the stables for the elegant houses on the south side of Beacon Hill and, later, their garages. Many of these structures were converted over time into homes and artists’ studios.

Located at the intersection of Mount Vernon and River streets, the house stands out among its red-brick neighbors. The first floor is made of stucco painted bright yellow while the second floor and roof are covered with red shingles in an English fish-scale pattern. Black half-timbering highlights peaks, windows, doors and the roofline.

A large wooden carving of a sunflower painted in bright yellow and green hangs under the eave above the front door.  Beneath it, in the center of a windowed gallery you see a carving of a black griffin.

Where did this unusual house come from? 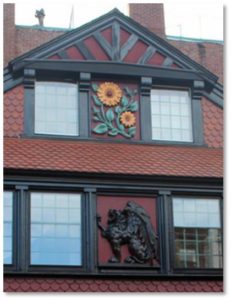 The Sunflower Castle was originally built in 1840 and was later described as just “an old wooden building.” In the 1860s it was the home of interior designer and artist Frank Hill Smith, who painted the ceiling frescoes in the Representatives Hall of the Massachusetts State House.

In 1878 Charles Luce renovated the house in the Queen Anne style, which is based on buildings constructed in England during the Elizabeth and Jacobean periods. One characteristic of this style is bold and unconventional color schemes. Others are asymmetry, contrast and elaborate decorative motifs. 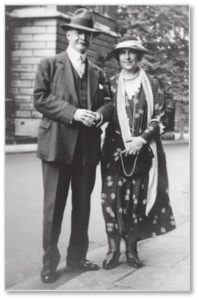 In 1904 Gertrude Beals Bourne, a watercolor artist. moved into the castle with her husband, architect Frank Bourne. Mr. Bourne created a studio on the third floor for his wife. Known for painting gardens and Colonial Revival architecture, Ms. Bourne showed her work at such venues as the Boston Art Club, the New York Water Color Club, the American Water Color Society, the Corcoran Gallery of Art, and the National Gallery of Art.

Ms. Bourne painted the interior of her studio prior to World War I. The painting, called “The Artist’s Studio – Sunflower Castle, is now in the collection of Historic New England. The room was later converted to the master bedroom, which is complete with walk-in closet and spacious bath. 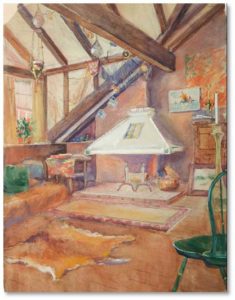 An enclosed garden with a gate influenced by Japanese design lies along the west side. Ms. Bourne was a dedicated gardener and one of the founders and first president of the Beacon Hill Garden Club. The organization helped residents to, “turn the open spaces behind their houses from laundry yards and privies into beautiful gardens.”

The Sunflower Castle’s garden has been included on the Hidden Gardens of Beacon Hill, a once-a –year event. This year it is scheduled for May 18, 2017.

For his part, Mr. Bourne was one of the founders of the Beacon Hill Association and was instrumental in saving Asher Benjamin’s Charles Street Meeting House. In 1922 he was a member of a group that raised the money needed to move the historic building 10 feet west when Charles Street was widened.

The Sunflower Castle went on the market in 2012 for $4.5 million and is a private residence today. 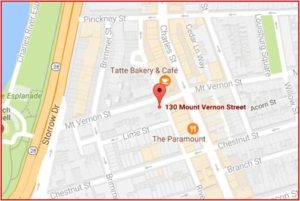 You can see the Sunflower Castle on Boston By Foot’s Flat of Beacon Hill tour, which is usually scheduled for December.

Althougt the house is not open to the public, you can admire it from the outside at any time.it sits just one block away from Charles Street.

Don’t plan on street parking—Beacon Hill Flat has Resident Permit parking only. You can park in the Boston Common garage nearby, and walk north on Charles Street. Turn left on Mount Vernon and you can’t miss the bright yellow-and-red house.. Or take the T’s Green Line, get off at the Arlington Street station and walk up Arlington Street to Charles Street.

1 thought on “The Sunflower Castle on Beacon Hill Flat”