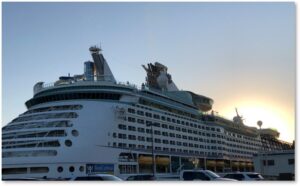 Already it’s time for the October 2022 roundup of posts on The Next Phase Blog. The tour guide season has ended for another year, which is both a relief and a disappointment.

When you take commuting into account, my retirement job often makes for long days. On a two-tour day, I can be out of the house at 9:45 am and not back in for dinner until 7:00 pm. That doesn’t leave much time for anything else.

While it’s nice to return to my normal schedule, though, I already miss the excitement of preparing, driving in to Boston, and joining the hustle and bustle at the Black Falcon Terminal. I even miss the half-mile walk to the pier from MassPort’s cellphone-waiting parking lot — and I never thought I would say that. 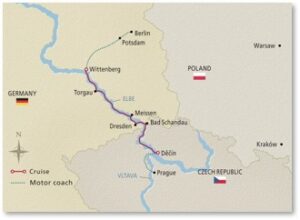 Not to worry, though. I already have the 2023 ship schedule, which is packed from April through October—many more dates than this year. That means I can be as active as I want to be and work as hard as I want to do. All the money from salary and tips goes into my travel fund.

Speaking of which, we just signed up for our next Viking River Cruise—the Elegant Elbe—from Berlin in German to Prague in the Czech Republic.

As I have mentioned before, I never know when I am going to get a reaction to a post on The Next Phase Blog post. Sometimes it happens right away but often I hear about a post I wrote years ago. Last month, I received a very nice email from David Wade, one of the news anchors on CBS-10, Channel 4. 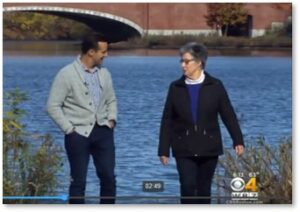 They were planning a segment on “Storrowing,” a particularly Boston problem on the Storrow Drive parkway. Truck drivers, both amateur and professional, ignore the signs warning them that trucks are not allowed because the bridges and tunnel entrance are too low to allow them entry. Then they hit the bridges, a collision which destroys the trucks.

Mr. Wade’s research took him to my 2021 blog post with a suggestion on how to solve the problem. He interviewed me with the Charles River in the background and the interview appeared on the 6:00 o’clock news on Halloween night.

You can watch it at:  https://www.cbsnews.com/boston/news/how-can-we-stop-trucks-storrowed-storrow-drive-question-everything/?intcid=CNM-00-10abd1h

This made my fourth appearance on TV, if you count the time I served as company spokesperson for a GBH fundraising drive. I thought that would be the only time I would ever appear on television. Who knew?

Those two things are among the reasons I haven’t been writing many posts on The Next Phase Blog as usual. But the ones that have appeared have been worth a read. Here are the October 2022 posts, grouped by category. 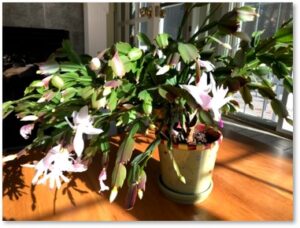 Now we’re past Halloween, into November and well on our way to Thanksgiving and Christmas. My Thanksgiving cactus is ready, having burst into bloom last week.

I used to think it was a Christmas cactus with bad timing until I read this article in Almanac. Mine is exposed to more sun than Almanac recommends but it lives in the unheated sunroom, which cools off at night.

Like the cactus, I should be blooming in the cooler weather as I get more time to write.  I hope to have some positive things to write about after Tuesday.