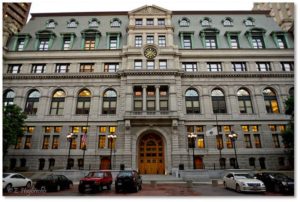 Yet, even when you know how to reach the courthouse, you will never see the front of it directly from the street because of the enormous semi-circular mask known as Center Plaza. Look up the flights of stairs leading through Center Plaza to what was once a beautiful garden and all you will see are the grills of cars in an employee parking lot. Is there a building up there? Really? Are you sure?

“Oh, that’s where I’m going, too,” I said as I was planning a post about the courthouse and wanted to go inside. “I’ll take you there.” So I did. We walked down Tremont, up a flight of stairs alongside Center Plaza and into what I can only think of as the Pemberton Parking Lot. “There it is,” I said, pointing to the front door. 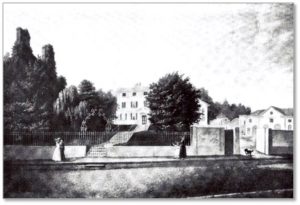 In the beginning, Pemberton Hill made up one third of the Tri-Mountain, along with Beacon Hill and Mount Vernon. Half of its four and a half acres belonged to Gardiner Greene, a wealthy merchant and real estate speculator who cultivated a series of celebrated gardens behind his mansion. Later this property, along with the other houses on Pemberton Hill, was purchased by Patrick Tracy Jackson for the Boston and Lowell Railroad. They paid an amount that would now be worth nearly $4 million. 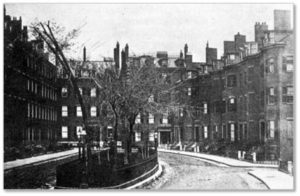 The development, renamed Pemberton Square in 1838, formed a bow with a curved eastern side. Mr. Dexter designed its three-story red-brick, bow-fronted town homes for Boston’s finest citizens. The straight western side had four-story homes with flat facades. In the center of the “square” an elliptical garden offered residents shade and privacy. Had it survived, it might look today like Louisberg Square on Beacon Hill.

By the beginning of the Civil War, residents had moved to other parts of the city, such as the South End and the Back Bay, and professional men like lawyers and architects used the location to establish their stability and credibility. These included Gridley J.F. Bryant and Edward Clarke Cabot, who designed some of Boston’s finest buildings. Schools and universities moved in while municipal departments and charitable organizations opened offices. By 1875 these new tenants filled Pemberton Square. The Boston Society of Architects made its first home there.

Center Plaza has received insults on its merits with terms like “hulking” and “mundane” but seldom have critics noted its role in completely blocking the view of the John Adams Courthouse behind it. Instead of opening the courthouse to the new Government Center, thus connecting it to City Hall and linking the judicial and administrative functions, the architects turned their backs on nineteenth-century elegance in favor of a forgettable contemporary structure.