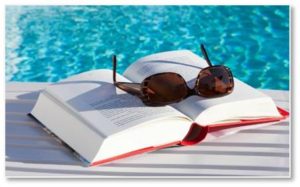 Sunday was such a beautiful day that my husband and I did something we rarely make the time to do: We spent the afternoon by the pool at The Longfellow Club in Wayland, MA.

I spend a lot of time in this pool taking water aerobics classes but I usually get out when the class is over and go on my way. I always have places to go and many things to do. Taking an entire afternoon to just sit, be serene, read and enjoy the day seemed like an incredible luxury. I looked forward to it.

When we got to the pool, we found it not particularly crowded. I pulled a chair into the shade of a canopy and settled down with my book, a container of cold grapes and sliced peaches, and a towel. My phone remained in the car so that I wouldn’t be tempted away from my goal: just reading a novel.

(The book I’m reading now is “Dark Road to Darjeeling” by Deanna Raybourn. It’s the fourth in her historical mystery series on Victorian Lady Julia Grey and is as engaging as all the others.)

A woman sitting nearby was reading on her tablet. After I had finished a few chapters, however, she switched to YouTube and began watching videos. These sounds, which used to be confined to the home, have become public noise. I found it impossible to concentrate on my book with the voices and music so close. Rather than make an issue of it, I simply picked up my things and moved to a shady row of chairs on the other side of the pool. 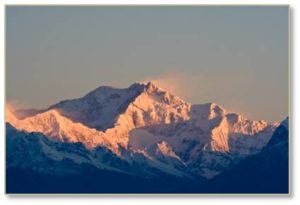 Kanchenjunga in the Himalayas

Resettling myself, I began to read again. A man and his two daughters came and took the chairs at the end of the row. The girls headed into the pool while Dad picked up his book and began to read. This all happened without my paying much attention, as I was engrossed in Lady Julia’s visit to a tea plantation on the lower slopes of Kanchenjunga in the Himalayas.

I didn’t hear that either, though. It wasn’t until he began to talk that my concentration frayed once again. Dad’s loud and penetrating voice — an intrusive public noise — forced me out of the book and into the moment. The call, although I tried not to listen, concerned his business activities. Selecting a green grape, I closed my ears and attempted to return to the Indian Himalayas. No such luck.

Dad’s conversation got louder and he seemed oblivious to the presence of anyone else nearby. Then his daughters came back to dry off and sit next to him. “Hey guys,” he said, “Could you give me a few moments. I need some privacy.”

Privacy, shmivacy. This man was broadcasting his business concerns all over the deep end of the pool. It occurred to me that, had I brought my phone, I could have recorded every word of his so-called private conversation without him ever being the wiser. Just to be mean and make a point, I could also have posted it on Facebook and Twitter.

Now, that’s probably three different kinds of against the law so I’m glad I didn’t have my phone with me and wasn’t even tempted. But still. It would have been so satisfying. Wicked fun, but fun.

Now, one expects noise at the pool. One hears the cries and screams and shouts of children having a good time in the water. One attempts not to hear the never-ending call and response of “Marco” and “Polo.” The diving board clunks up and down, the lifeguard’s whistle shrills and periodically he or she announces that Adult Swim is starting or ending. Those sounds, however, make up background noise, the kind of thing I can ignore quite easily, especially while I’m reading a good book.

This was different–and amazing. How could anyone be oblivious to the fact that he was communicating personal business loudly enough for any number of people to hear? If he didn’t want his children to listen, why would he be okay with strangers hearing what he had to say?

The new technologies of tablet and cell phone have replaced the once-ubiquitous transistor radio as the annoying, inescapable, and intrusive sound of the pool and, probably, the beach as well. Their owners do not seem to draw a line between public and private. Or perhaps they think they live in a bubble that protects private conversations within a certain radius. 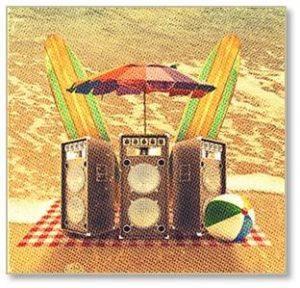 Transistor radios delivered only news and music. In those days I heard them at the beach and I’m sure that many people on the sand nearby were irritated by loud music and periodic commercials. As a teenager I had no problem with loud music and I spent most of my time in the water, anyway.

YouTube offers a great deal more variety, especially during this election season, as people listen to speeches and comedians parodying speeches. But phone calls that go beyond—way beyond—“Yes, I’ll be home by 6 and I’ll bring a pizza,” strike me as over the top.

As Susanne said yesterday, noise-canceling earphones provide the best solution but I don’t go to the pool to wear earphones. Why can’t the noisemakers wear earphones? After all, they are the ones making the noise and disrupting others. And do they really think no one pays attention just because we’re strangers?

So, one more wicked thought: a new approach to corporate espionage. Send a non-corporate type like a mom or grandmother to sit next to the person you’re spying on at the pool. Bring a smart phone. Record every word he says when his mobile phone rings with that oh-so-important call and his private messages turn into public noise. Gotcha.

Now, back to Kanchenjunga.