We’re in the thick of it now. Summer is here, sharing a heat wave with the country.  It means we’re enduring the humidity and drought, enjoying some vacation and taking things a little slower. We are also suffering the continued assault of a toxic political campaign that is bringing the presidential elections to an all-time low. My wish for you is a pair of noise canceling headphones until it’s over. 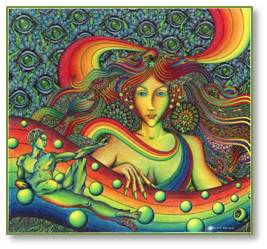 August is the start of the event season in the high tech industry. Conferences and trade shows ramp up and run through the second week of December. I am collecting frequent-flier miles and spending a lot of time somewhere else. Right now I’m sitting on a plane to Vegas with a lot on my mind.

Smart people that we are, we turn to the internet for enlightenment and escape. Sip a glass of this melon sangria to stay cool while you read and surf. You can make it virgin by swapping the alcohol for sparkling grape juice.

Take your mind off the crazy and deepen your laugh lines

In case you ever wondered where Amazon stores all their stuff, look no further. I’d add a photo but it won’t do justice to the visual enormity that is an Amazon fulfillment center.

A link between positive thinking and poor performance?  As a matter of fact, yes.  According to Gabriele Oettingen professor of psychology at New York University and the University of Hamburg positive thinking fools our minds into thinking we have already achieved our goals and we stop trying. It could happen.

Julian Assange, founder and whistleblower extraordinaire of WikiLeaks, is celebrating four years of asylum at the Ecuadorian Embassy in London. His confinement has not silenced him and in an interesting turn of events his U.S. defense attorney has requested Attorney-General Loretta Lynch close the WikiLeaks case following the precedent set by her decision to close the probe into Hillary Clinton for mishandling classified information. This is getting interesting. And he keeps on publishing.

Switching to a Stand-up Desk. 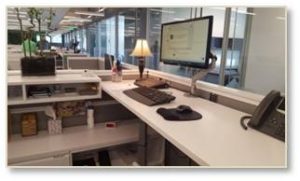 I was first introduced to the concept when I read this article. Then I forgot about it until we moved into our new building in June.  Everything here is open plan, high-tech and ergonomic. I opted for a multi-functional desk that includes a hydraulic lift to turn sitting into standing. I love it. My lower back, legs and neck have all sent me thank you notes. It’s been two months and I’m still standing. My posture is better, my weight is rebalanced and my lower back is happy. Not going back.

The exhaustion epidemic. It’s a personal energy crisis and it’s the thing nobody is talking about. Women are especially good at pretending it’s not there. We don’t like to admit how much we do and how tired we become.

And then there’s this. Martha and Snoop Dogg getting down in the kitchen for some dinner party fun.  For real.

Summer is about relaxation, fun and entertaining ourselves. We won’t see the blockbuster movie launches until fall and television programs are on hiatus or summer reruns. l use July and August to catch up on my reading and movies I missed due to my travel schedule.

Read: I think of August as my vacation month even if I’m working. I enjoy a book that suspends my disbelief and pulls me in. Mysteries and medical thrillers grab my attention, and I throw in a little sci-fi for good measure.

The Atlantis Gene by A.G. Riddle. This is book one in a trilogy, and my summer reading project. It’s deep and wide; exploring the premise of human extinction, evolution, alien technology, and a good dose of “yeah, that could happen.”  Hard to put down.

Watch: My friend Gary hooked us on the television mini-series The Night Manager featuring Hugh Laurie. We love that he’s not faking an American accent and is true to his funny- bad old self. Based on the book by John Le Carré, it’s a fictional account of post-cold war espionage with the added twists and turns of English government and secret service plots. Pinkies up with some great acting!

During the dog days of summer there aren’t many must-see movies; it’s all B roll with a few exceptions. A remake of the beautiful classic, Pete’s Dragon, is one of them.  It’s a sweet escape. Director David Lowery re-imagines the story and includes Robert Redford. Indulge your inner child.

Speaking of remakes…. A remake of Ben-Hur opened last week. The original holds a special place in my heart as one of the first movies I went to with my Dad.  There is only one Judah Ben-Hur and that’s Charlton Heston. This a bad remake that should never have happened. If you haven’t seen the original, find it and watch it.  If you must go to this one walk in for the chariot scene, then walk out.

Worth a mention: On a recent 14-hour flight I had a movie marathon that included Dead Poole. It is Irreverent and funny and I was laughing out loud at 2:00 a.m. while sitting uncomfortably close to two strangers.

Listen: Rediscover the beauty of the alto flute. It has a sound all its own, soul soothing and haunting. Center yourself with this track from Theresa Griffith, who writes and plays original music on her CD Utopia. I am hooked.

I can’t get enough of Michael Kiwanuka, a British singer with a voice that’s a little Otis Redding with a dash of Curtis Mayfield. It’s folk with a touch of blues.

You’ve probably heard Sharon Jones without realizing it. She’s a powerful R&B singer whose talent went unrecognized until she was in her forties. She channels some inner BB King and makes you want to sing along. Treat yourself.

Its summer. Get all up in it.