Years ago I went to Minneapolis on a business trip and saw the city’s network of second-story walkways that allows pedestrians to move from building to building without ever setting foot outside. “What a wonderful idea!” I thought. Then, “Why don’t we have these in Boston?”

The Largest Skyway System in the World 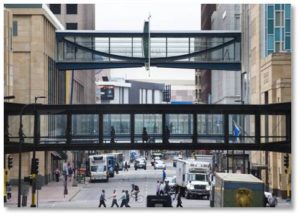 The Minneapolis “skyway” system is the largest in the world—so big that they have a map that lets you navigate all its numerous connections without getting lost. The skyways make it easy for people to move around the city, keep pedestrian traffic off the streets, especially during the winter months, and bring prosperous commercial nodes up to the second-floor level.

Since then, Boston has added exactly one set of these connections in the Back Bay’s High Spine. The two skyways make it possible to walk from the Sheraton Boston Hotel on Dalton Street all the way to the Weston Copley Place on Dartmouth Street without donning a coat, hat, gloves, scarf and boots.

Skyways in the High Spine

The route takes you through two shopping malls and across skyways spanning Huntington Avenue and Stuart Street. It’s a pretty pleasant walk and one that makes lunch hour easier for hundreds of office workers in the area. Plus, the street traffic moves more smoothly without so many pedestrians at the crosswalks.

By ducking into public lobbies and commercial spaces, you can continue mostly inside until you reach Columbus Avenue at Statler Park. It’s not ideal—you have to cross several streets and walk an occasional block with the Montreal Express at your back — but it’s possible. Here’s how:

The Streets in Winter

That’s a fun bit of urban navigation but the larger question is, why doesn’t Boston have more skyways? No one loves walking the city streets more than a Boston By Foot docent but even we have our limits. When the wind is howling and the temperature is five degrees above zero, we enjoy being warm, too. Plus, we can all think of intersections where pedestrians and cars don’t mingle well. (I have the intersection of Summer Street and Atlantic Avenue at South Station in mind.)

Why so few skyways? You may think that Boston’s older buildings don’t lend themselves to this kind of architecture and that’s true in many parts of the city. (Although Minneapolis has connected older buildings and given them new life in the process.) Skyways aren’t prudent in the Back Bay outside of the High Spine, on Beacon Hill, or in the South End, for example.

Where Skyways Fit in Boston

But two parts of the city now experiencing rapid upward construction would be perfect:

Not only would skyways in the Seaport protect pedestrians from the weather, they would keep business moving when supertides hit. As global warming progresses, this is likely to happen more often in the coming years.
Architects have protected the HVAC and electrical systems in the buildings by raising them up to the third floor. But what about the people?  Do they really expect workers to slog through a foot of Boston Harbor to get to work? Would anyone head out to a flooded restaurant for lunch?  Would sandwich shops deliver by gondola? The Seaport is a perfect test bed for skyways in Boston.

In Boston, we prefer to have our buildings standing proudly and independently alone: no connections, no interaction, no cooperation. Because each building is owned by, designed and developed by separate companies, skyways would require a kind of unified urban planning that is just not Boston’s strong point.

Putting skyways in both of these areas requires foresight and advance planning but the architects have shown they can do that to protect expensive equipment from periodic flooding. I guess allowing someone from the building across the street to enter your second-story lobby is a different story. Quelle horreur! 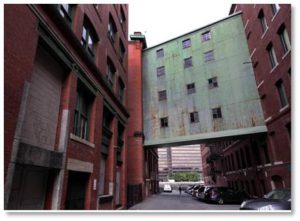 Recently residents of the Fort Point Channel district got together to protect a four-story, early 20th-century, overhead pedestrian bridge over Necco Court from being demolished. So clearly it had some value—even though ti was not a beautiful skyway.

Now picture taking a different approach from the way things have always been done in Boston. Think about the big picture, not just one parcel at a time. Consider the impact on human beings not just of each new structure but of an entire district.