Boston has a lot of historic buildings—as one would expect from a city founded in 1630. It also has a lot of buildings that are architecturally interesting as they range from the 17th century to the present. One of the pleasures of walking through Boston’s streets comes from seeing the proximity of remarkable structures from different centuries, one after another and from different angles. 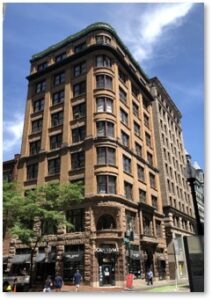 In fact, Boston has so many structures that grab my attention, it often surprises me to discover that no one else seems to think them worthy of note.

Take the Farlow Building at 92 State Street. What first attracted me about this building was the shade from trees along the sidewalk flickering over the rough stone of its lower floors. The stone was a warm terra-cotta, the shadows dark, and the trees a bright green.

I stopped and began to pay attention.

A Building with Character

At the edge of the Financial District, where glass-walled towers have proliferated, the Farlow Building has its own 19th-century character. Compared to the commercial giants nearby, this building is relatively small. It occupies the northeast corner of State Street and Merchants Row with a rounded edge marking the transition from one street to the other.

Its façade and three windows open on State Street, with another three windows on Merchants Row.  A smoke shop and a nail salon occupy its commercial ground floor. Nothing remarkable about that.

All this is very nice but the stone carvings and detail work are the most interesting part. Just look at the portico on the corner. 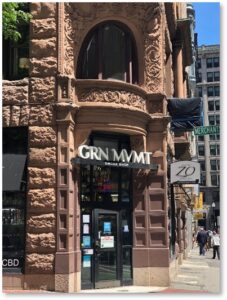 It rises two stories with a door into the retail space. A balcony of sorts covers the door. Elaborate carvings decorate the stonework around both, ranged from simple boxes to curlicues and foliate carvings. Large medallions bracket the arched window (or maybe it’s a door) that opens on to the balcony.

The door that leads to the Farlow Building’s upper floors opens from the center of the State Street façade with a set of heavy wooden doors in a wooden frame. They are set in an arch with a semi-circular window above and brass lanterns on either side.

Another faux balcony tops the doorway and frames a window that’s bracketed by flanking Ionic columns and topped with a copper pediment. Elaborate stone carving separates the second and third floors along both the State Street and Merchants Row.

Surely, I thought, this building has been noted in one of the many books written about Boston’s history and architecture. How could it not? 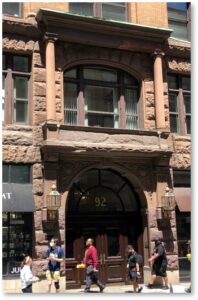 Determined to find out more, I pulled books off my shelves of volumes about Boston, Massachusetts and New England. I started with the “AIA Guide to Boston” but found nothing. Ditto for the three books titled “Boston Then and Now,” and, just to be thorough, the two called “Lost Boston.” Nothing.

Now, this is frustrating for several reasons. First, I couldn’t find information on who designed the Farlow Building and when. Also, I wanted to know who Mr. Farlow was and why he erected his building on State Street. Second, I felt sad that this remarkable structure got so little attention.

Later, I got a chance to look closer and found a plaque to the right of the front door that provided more information. It’s small and dark and difficult to see from across the street but helpful nonetheless.

The Farlow Building was constructed in 1891 by John Smith Farlow, described as “a distinguished Boston commercial leader and well-known philanthropist. Mr. Farlow was a commission merchant who traded in the East Indies and in China. He was also the president of the Big Four Railroad.”

Born John Jenkins Farlow in Ireland in 1817, he emigrated with his parents to Boston via Canada when he was a small child. As a young man John Smith Farlow worked in the grocery business in Boston, and later became involved in the East India trade. Eventually, he became an investor in various railroad companies, and was at one time on the board of directors of the Ogdensburg and Lake Champlain Railroad in New York State.

Reading between the lines, Mr. Farlow leveraged his grocery earnings into the more profitable Atlantic shipping business. Building on that, he got into railroads. He sounds like a pretty savvy businessman.

Google offered information about the Big Four Railroad as well. Model Railroader tells us that:

“The Big Four did not refer to four separate railroads; rather, it was the nickname of one railroad, the Cleveland, Cincinnati, Chicago & St. Louis Ry. The “Big Four” nickname referred to the four cities in its name. The CCC&StL was formed in 1889 by the consolidation of the Cincinnati, Indianapolis, St. Louis & Chicago (which some regard as the original Big Four) with the similarly named Cleveland, Columbus, Cincinnati & Indianapolis (also known as the Bee Line).”

Whew, that’s a lot of names. No wonder they shortened it to Big Four. The railroad was headquartered in Indianapolis, Indiana. 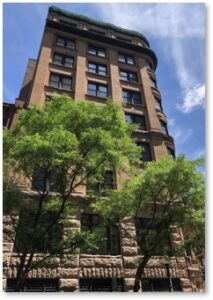 I urge you to make up your own mind about the Farlow Building and I recommend doing it on a sunny day. That’s when the brown sandstone and yellow brick will show up to best advantage.

Nearest T Stop: Government Center, State Street
Nearest Parking: It won’t be easy—or cheap. Check out one of the parking apps to find the spot that’s either closest or cheapest.