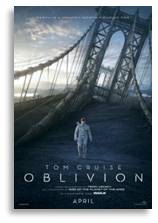 When we were deciding which movie to see this weekend, we leaned toward Oblivion.  As usual, we checked out all the regular sources for guidance.  This is what we read about @OblivionMovie:
But I don’t always trust mainstream reviews of science fiction that are written by folks we science fiction fans call “mundane.”  So I talked to my friend Janet, a fellow member of the SpaceCrafts writing group, who had just seen it.  She said, “If you find a plot in Oblivion, let me know what it is.”
OK, Got it.  Hollywood has trotted out yet another version of its fixed idea that science fiction movies don’t actually need stories with believable characters, understandable (if not engrossing) plots, and a combination of dynamic tension, action, and ideas.  All they need (sigh) is big, expensive special effects and a bankable A-list star. But here’s the thing they need to understand: it’s the story, stupid.

Let’s Not Change the System

Years ago my company sponsored a technology conference at which @PeterGuber, the CEO of Mandalay Pictures was one of the speakers.  He gave an excellent presentation to a packed room and his topic was the importance of story in the movies.  It was informative, energizing, even inspiring, but I knew it wasn’t true.  When he took questions, my hand shot up.  I said that I agreed wholeheartedly about the importance of story but wondered why, if that’s the case, the writer is the low man on the Hollywood totem pole.  The writer is the person with the least power to even defend the integrity of his story from the myriad people who think they have a better idea.

This is important because there is no stronger human instinct—not love, not hunger, not even sex—that is stronger than one person’s drive to change another person’s creative product.Mr. Guber gave me a very gracious and well-spoken reply that said, in essence, “Yes, that’s unfortunate but it’s the way Hollywood works.”  Wow.  Here’s the multi-millionaire head of a Hollywood production company who can’t or won’t accept the challenge of changing a system that doesn’t work—or works sporadically.  A system that renders powerless the creator of the very thing he identified as most important to a movie’s success.  In the high-tech industry where I worked, abdicating responsibility for a critical part of your job—even when you’re not the person empowered to fix it—can get you fired.  I guess things are different in Hollywood.Mind you, none of this is hurting Oblivion any.  In its opening weekend, the film grossed $37,054,485 domestically and another $112 million overseas on a production budget of $150M, shrunk to $120 after deducting location credits.  This, despite a score of 57% Rotten from +Rotten Tomatoes on the Tomatometer.  More money will come.But is it too much to ask that a science fiction movie have a good plot?   Is it too much to hope for that it will be based on something more substantial than an unpublished graphic novel?  Were I to gamble $150  million on a project, I would ensure that it had the very best foundation I could get.