One of the things that adds to Boston’s charm is the close association of buildings from different periods, constructed with a variety of materials and in a number of architectural styles. We have brick next to granite, Greek Revival close to Panel Brick and decorative Victorian elements across the street from monumental concrete. 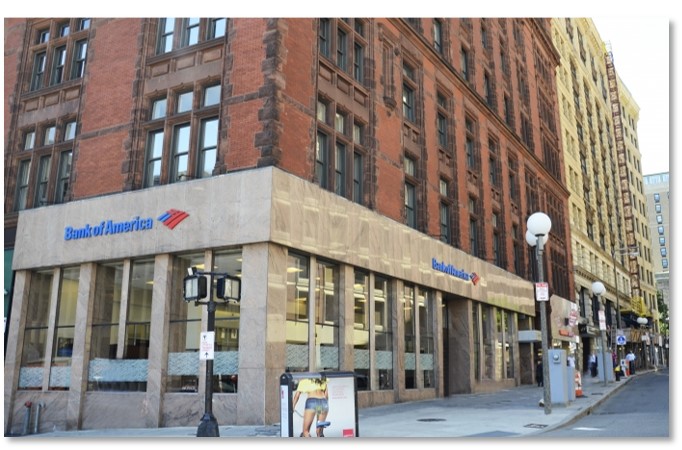 Sometimes, however,these juxtapositions don’t appear at street level because the ground floors have been commercialized or modernized in a way that masks, or even obliterates, the original structure.

One such building is 10 Tremont Street.

From the street, you see only tan panels of polished Stony Creek granite, bland and insipid, with doors that open into yet another bank with its ATM kiosk. Yawn. If that doesn’t appeal, try the Dunkin Donuts next door.

Step across Court Street or into City Hall Plaza and look up, however, and you will see  a seven-story, 35,000-square-foot commercial office building of red brick with a heavily decorated façade.

Two questions: When was this structure built and by whom? To find the first answer, we take the Way Back Machine to the 18th and 19th centuries.

10 Tremont Street rises on a site that has strong historical ties. First, Joseph Ingersoll’s Inn once stood here. That’s the hotel in which George Washington stayed while he visited Boston during his 1789 tour of the three New England states that had ratified the Constitution: Connecticut, Massachusetts and New Hampshire.

Here also the new President Washington and Massachusetts Governor John Hancock held a constitutional confrontation. Pres. Washington did not visit Gov. Hancock, as the governor had anticipated, which would have demonstrated an the Governor’s superior position. Gov. Hancock was then forced to go to the President. This visit set a precedent for the acceptance of federal sovereignty over the states in the brand-new country.

From Law Offices to Groceries 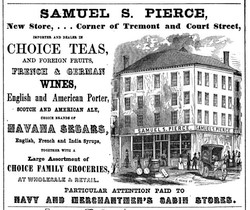 In 1825, Daniel Webster—eloquent orator, Massachusetts Senator, and U.S. Secretary of State—practiced law in that same building.

The original structure changed functions  again In 1831 when Samuel Stillman Pierce and his partner, Eldad Worcester, established a thriving grocery business there. The S.S. Pierce grocery store took up the ground floor with offices above. S.S. Pierce famously stocked thousands of items, including rare and exotic food and wine, which they purveyed to the rich and famous. S.S. Pierce delivered orders to homes in their branded wagons, trucks and sleighs. The business moved to Copley Square in 1887, occupying a building no longer extant that was located on a site now occupied by the Copley Place mall.

That means the current structure at 10 Tremont Street was built after 1887. This building is also clearly visible (but always in the background) in archive photos of Tremont Street taken in the latter part of the 19th century.

The Building at 10 Tremont Street

Normally when I write one of these posts, I have researched its history and can explain the origin of a building, describe the style in which it was designed, and name the architect(s) that designed it. 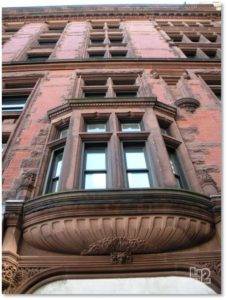 The bay window over the entrance

With 10 Tremont, however, I have come up dry. I’m usually pretty good at finding information,

even if I get to it indirectly or turn to odd sources. What I have been able to learn 10 Tremont Street follows.

The building is made of red brick with darker sandstone quoins on the edges. The doorway trim is Carrara marble from Northern Italy. Rough, quarry-faced granite outlines the doors and windows so thickly that in places it almost overlaps. The façade is very busy, filled with single windows as well as windows that are grouped by twos and fours and placed asymmetrically. It also sports a couple of niches, but no statues.

Foliate carvings similar to those on the Old South Church’s string course decorate the base of the bay window over the front door. A small ram’s head looks down on the front entrance. Carvings and blocks of rough stone also frame the fifth-floor windows and the niches..

The Bartizan on Tremont

The building’s most distinctive feature—at least to me—hangs on the corner of Tremont and Court Streets: one of Boston’s few bartizans. A bartizan is:

“An overhanging, wall-mounted turret projecting from the walls of late medieval and early-modern fortifications from the early 14th century up to the 18th century.”

I’m not an architect or an historian so I find the overall style somewhat muddled, overdone and not easy to pin down. The roof appears to be bordered by a brick wall that is pierced in geometric patterns with small turrets at the four corners. These turrets identify the building in old photos. 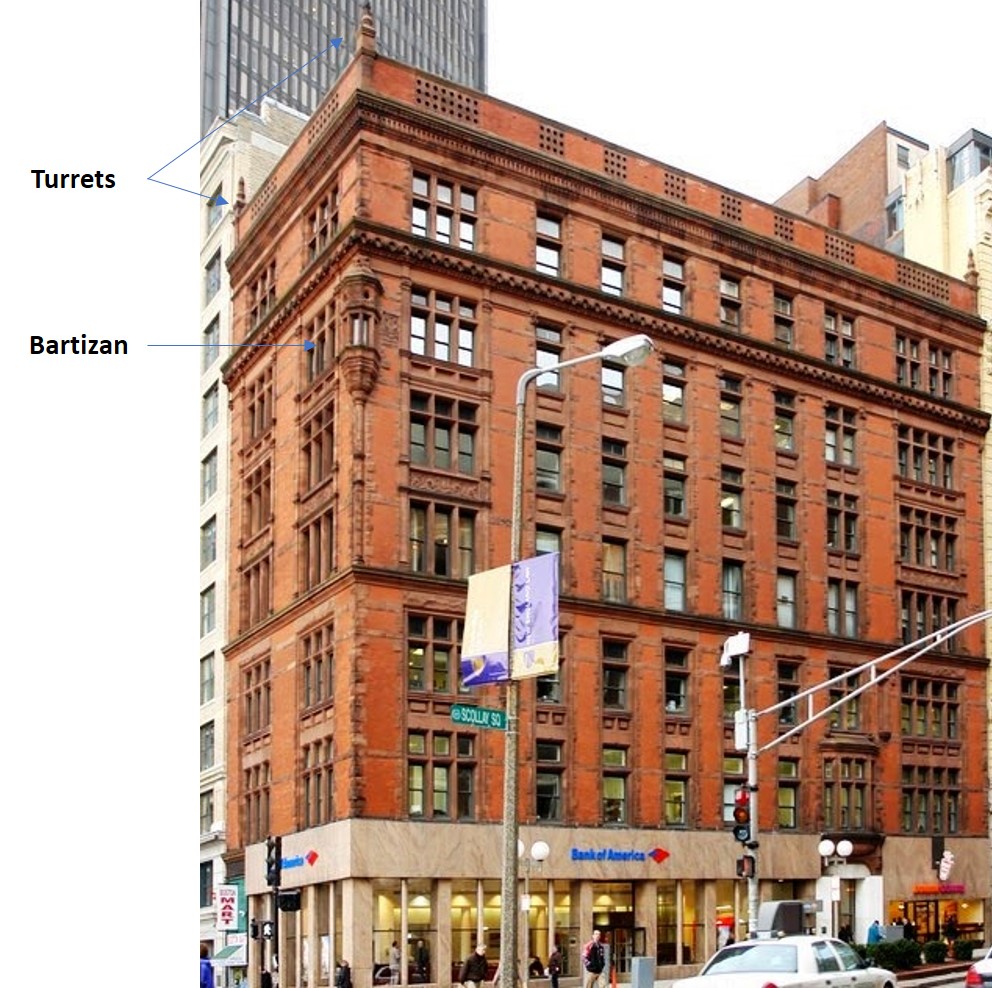 The bartizan and turrets

10 Tremont Street has been renovated and the lobby now looks very modern with exposed brick glass and ferns. Two historical plaques in the lobby make note of the site’s background. One, placed by the Bostonian Society in 1924, marks President Washington’s visit. The second plaque gives a short history of the site. Neither mentions who designed or built the current structure.

Much of the original brick work and architectural detail was maintained during the restoration, as this video walk-through shows. 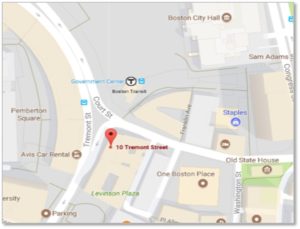 I hope that my expert readers at Boston By Foot, the Boston Preservation Alliance and other organizations will help me solve the mystery of who designed and built 10 Tremont Street. Knowing either the architect or the builder would give me more data to go on.

If you have more information on 10 Tremont Street and are willing to pass it along, please comment on the blog. Or forward the this post to someone who would know.

Over to you, expert readers.

12 thoughts on “The Mystery of 10 Tremont Street”