This makes the 11th post in my series on Boston’s Bronze Menagerie.

Two of Boston’s 100-odd colleges and universities sit side by side on Huntington Avenue, which is also known as the Avenue of the Arts. Back when one of my brothers attended Wentworth Institute of Technology and I went to Northeastern University, the two campuses did not abut. Both have grown over time, however, and now they bump up against one another.

This proximity contributes to my series on Boston’s Bronze Menagerie because @Northeastern’s mascot is the husky and Wentworth’s is the leopard. That puts me in mind of the famous exchange in the 1984 movie Ghostbusters when Dr. Peter Venkman predicts a disaster of Biblical proportions: “Human sacrifice, dogs and cats living together  . . . mass hysteria!”

Despite the movie’s dour scenario, however, Wentworth’s leopard and Northeastern’s King Husky seem to get along pretty well living side by side on Huntington Avenue. 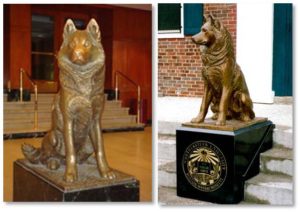 Northeastern took King Husky as their mascot in 1927, the same year the school adopted red and black as its colors. A series of live dogs held the title but that approach was discontinued, reinstated, and discontinued again.

In 1959 the university raised a fund to create a permanent statue. NU commissioned Boston’s firm of Cassieri and DiBiccari to create the bronze mascot. Anne Philbrick Hall sculpted the statue and it was installed in 1962.

The imposing bronze King Husky sits on a plinth in Ell Hall just inside the front doors, looking outward toward the Krentzman Quadrangle. University tradition says that students who pat his nose will have good luck and bring good fortune to the school. All the attention has made the dog’s nose suitably shiny and somewhat worn. An informal tradition started by NU’s male students, says that King Husky will bark when a virgin walks past but this is false. Just saying.

In the 1930s and 1940s, Wentworth called its athletic teams The Technicians. This  brings to mind a school mascot from The Big Bang Theory and doesn’t make for great rah-rah team spirit. In 1969 @Wentworthinst changed its mascot to a much fiercer beast. They drew the leopard from the coat of arms of the school’s founder Arioch Wentworth. The family shield goes back to 13th century Yorkshire, England, when it was fashioned by William Wentworth. Wentworth’s student newspaper, The Wenitech, described the leopard as a valiant warrior that, “signifies such traits as bravery, swiftness, triumph, and engagement in hazardous enterprises.”

Unlike Northeastern, Wentworth never attempted a live mascot but their bronze leopard crouches on a red rock boulder alongside Huntington Avenue. The institute unveiled the six-foot-high statue, sculpted by Robert Shure, in May of 2003. Mr. Shure also worked at Cascieri and DiBiccari studio when it was in business.

Another, much smaller cat, also sculpted by Robert Shure, occupies the NU campus. One half of the statue named “A Man with a Cat Named Yitz,” this kitty sits on a granite bench outside Shillman Hall between Forsyth and Lenox Streets. The statue appeared overnight in February of 2011 with no advance notice. 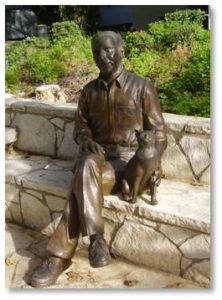 The bronze human represents Robert J. Shillman (E’68), founder and CEO of Cognex and a benefactor for whom the classroom building is named. He has one hand on Yitz, a stray cat whom he befriended. Northeastern students refer to the little animal as Shillman Cat and he has a lot of friends.

Even though smaller than King Husky, not to mention a leopard, Shillman Cat stands out as the big guy on campus. Shillman Cat frequently poses for photo ops and selfies and is sometimes enlisted to support causes.

He has his own Twitter handle (@shillmancat) and you can search for him on Facebook or check in with him on Foursquare.

Friends of Shillman Cat keep him well dressed with a custom-made wardrobe: a bow tie for Halloween, a Pilgrim hat for Thanksgiving, knitted hat and sweater for winter, mask and beads for Mardi Gras, etc. School tradition says it’s bad luck if Shillman Cat crosses your path. Unlike real-life felines, however, he tends to stay where he was put.