“It became necessary to destroy the town to save it.”

The appetite for watching superheroes beat up bad guys on screen has not waned but it has evolved, as depicted in Captain America: Civil War. This latest film in The Avengers franchise involves good guys hitting other good guys over philosophical differences. Is this an improvement? Not hardly. 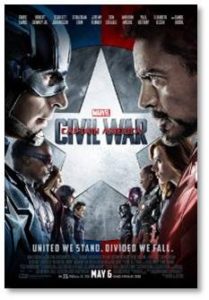 Past superhero movies have been criticized for the reckless, wanton collateral damage that has resulted from the clash of mega forces over cities, on streets, in the water, and pretty much everywhere else. The infamous Battle of New York that served as the finale of The Avengers movie was so egregious in this regard that The Hollywood Reporter asked Kinetic Analysis Corp., a firm that predicts and assesses the cost of disasters, to calculate the financial impact. Their conclusion was a total of $160 billion. In the real world, that would put a few insurance companies right out of business and that doesn’t include the emotional cost of people killed by falling debris and things plummeting from the sky.

The carnage continued in subsequent movies and it is at the core of the plot in Marvel’s new Avengers franchise film: Captain America: Civil War. Here the wanton destruction and loss of life caused by defending the world with superpowers is visually documented for everyone to see. Fed up with the people of earth suffering gross damage while the superheroes wise crack their way back to Avengers HQ, the United Nations creates a pact that imposes limits on when and where the Avengers would be allowed to intervene.

Note: In the Marvel universe, we have to assume that the UN is nowhere near as politicized, biased, gridlocked, and flawed as it actually is.

Half of the crew thinks this is a reasonable idea. The other half refuse to sign. Stalemate. What happens next? This is an interesting franchise development — and the main reason I agreed to see the movie — for three reasons:

In the real world where we all live, this disagreement would be negotiated and the pact modified until everyone was satisfied and all the Avengers signed on the bottom line. Or one side would sue the other and lawyers would make a ton of money while everything got hung up in the courts for years. Or the Avengers would agree to allow a mediator to review the pact and change it as necessary. None of these things makes for great drama, however, at least not to the superhero fan base.

The rest of us might find the legal drama of Erin Brockovitch, A Few Good Men or The Lincoln Lawyer engrossing but fanboys are in it for the Bam! Pow! Wham! so their conversations go something like this:

FB 1: “Wouldn’t it be cool if Superman fought Batman?”

FB 2: “Yeah, that would be even better than Predator versus Alien because Superman can fly!”  Looks around. “Do you have any more Mountain Dew, dude?”

FB 3: Handing over a can of soda. “How about if the Avengers had to fight one another? Then we’d see whose superpowers were stronger?”

FB 1: “That’s a great idea. Like, would Ironman’s suit be stronger than Captain America’s shield? Where are the Doritos?”

And thus Captain America: Civil War, faced with the possibility of growth and maturity, returns to its tried, true, and profitable formula. Yes, the dialog is snappy and fun. Yes, there is humor, mostly from Ironman and a very young Spiderman. Yes, there is good acting from an extensive cast of good actors. When push comes to shove, however, the Avengers respond to conflict the same way they always respond to a threat—by pushing and shoving.

One side defends the need to intervene wherever and whenever despite the collateral damage to others by creating even more violence and destruction. The other side tries to get them to see the need to limit unnecessary violence by pounding their own friends into the ground—or the airport tarmac as it turns out. Thank goodness some grownup thought to evacuate the place before the adolescent Bam! Pow! Wham! approach to problem solving got started.

This is very disappointing—at least to me. I’m sure that everyone involved in this movie is thrilled with it. And why not? To date, Captain America: Civil War has gotten great reviews: 90% Fresh and 91% Liked on the Tomatometer. More importantly, it has grossed $295,892,078 worldwide after only two weeks on a production budget of $250 million. I was underwhelmed, however, because I saw this acknowledgement of real-world concerns as a chance for the franchise to turn away from Bam! Pow! Wham! to deliver a more subtle and interesting story. But no.

We’ll have to leave that to television, where Marvel’s Agents of S.H.I.E.L.D. has created complex and intriguing story lines that defy stereotypes and go way outside the box. They twist and turn and go in unusual directions. The characters change and mature in unpredictable ways. Most people on any side wear normal clothes. The S.H.I.E.L.D agents use science and skill with only occasional violence to solve problems 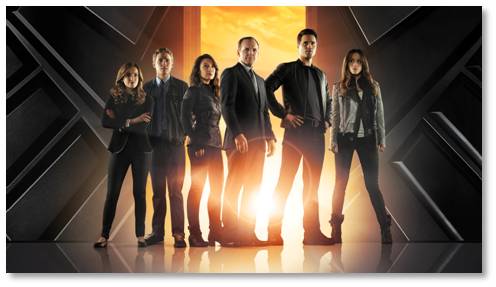 The small screen version of the Avengers is, in many ways, much more interesting than the big screen’s broad-brush violence. Which is too bad because when the Avengers learn nothing, they don’t grow.  That means the movies are doomed to endless repetitions of Bam! Pow! Wham!  A status quo like that is a waste of considerable talent.