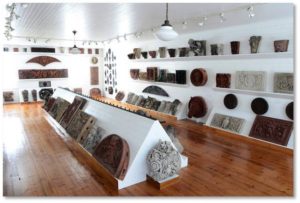 Ivan Karp, an art dealer who became a “rubble rouser,” founded the Anonymous Art Museum. He had taken on the mission of rescuing architectural decoration from buildings erected in previous centuries but scheduled for demolition.

Before the birth of modernism, architects decorated buildings both private and public with friezes, brackets, dentils, string courses, bas reliefs, medallions, and statuary as a matter of course. Both the architects and the builders saw this decoration as a measure of either the building’s importance to the community or the status and wealth of the man who paid to have it built. It could be both.

Some of these decorations, amazing works of art, have withstood the test of time, while others were created by carvers who produced workmanlike pieces every day as part of their jobs.

Because cities are living things, however, older buildings often come down so new ones can go up and not everyone appreciates the architectural art — or thinks it worth saving. A wrecker’s ball does not discriminate between a solid brick wall and a bas-relief carving. It all ends up as piles of rubble. 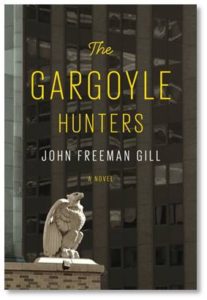 Mr. Karp also served as a consultant to John Freeman Gill during the writing of his novel, “The Gargoyle Hunters.” I just finished this wonderful book. This coming-of-age story deals with a boy whose father has dedicated himself to rescuing as much of New York City’s architectural art as possible. In fact, his dedication crosses the line from love to obsession.

As Griffin Watts learns about his father’s architectural art business, we learn about the “restoration” of the Woolworth Building, the pediment carvings over brownstone front doors, and the demolition of Penn Station.” The book” does not, alas, come with illustrations but I turned to Google more than once to see for myself what Mr. Gill was describing. It’s very well written and I enjoyed every page.

I could not read these two pieces without thinking of Boston’s architectural art. Here and there in the city you can find a piece of an older Boston that has been preserved—or at least not discarded. Some represent big successes in saving true works of art.

We simply cannot preserve every building that ever went up. Had Boston taken this approach, we would have much older, much browner and much smaller buildings. That doesn’t make for growth or a vibrant city. 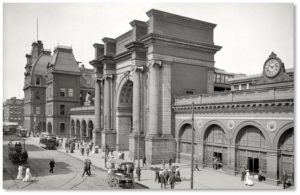 And that’s just a short list. Boston could build a Temple of Karnak from all the granite, marble, and sandstone columns that have fallen to the wrecker’s ball over the years. Where did all these enormous stone drums and cylinders go?

It amazes me how recently some of this destruction has occurred, but I shouldn’t be surprised. At Northeastern University I lived in Speare Hall, which was built on the site of the old Opera House (demolished 1958). 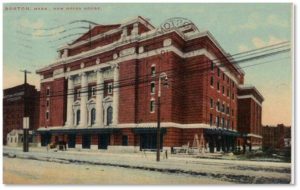 A friend who lives on West Newton Hill tells me that some of the old homes there, designed by prominent 19th century architects, are being demolished now. These houses incorporate stained glass windows, hand-carved woodwork, plaster rosettes, elaborate newel posts and other elegant features that could never be duplicated — or afforded — today.