The John F. Kennedy Federal Building’s Motherwell mural is not hard to find, although it is one of few paintings you have to pass a security screen to reach. Hundreds of people walk under this Art Hiding in Plain Sight every day because it hangs above a well-traveled hallway. 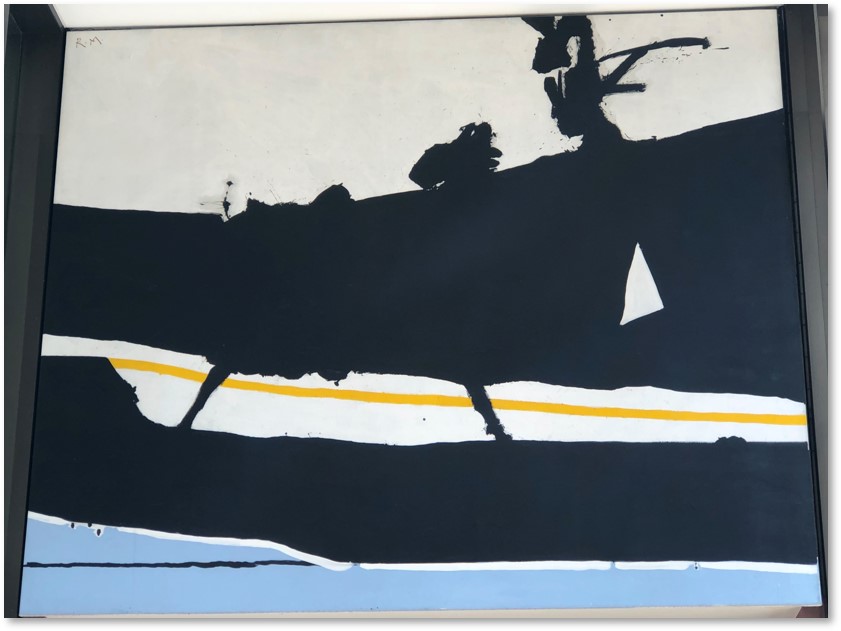 Those folks probably don’t give it a second glance and that’s too bad. This large painting offers more than meets the eye—and what meets the eye is a powerful abstract composition.

Entitled “New England Elegy,” the mural in black, blue, white and yellow is the first painting in a series of that name. The series began when the U.S. General Services Administration commissioned American Artist Robert Motherwell (1915 – 1991) to create a mural that would hang in the large, glassed-in corridor of the J.F.K Federal Building in Government Center.

The wall plaque beside the painting states,

“The mural is an abstract painting which represents a bereavement of the martyred and beloved President John F. Kennedy.  It evokes varying triumphant and melancholy emotions upon each individual viewer in reflecting on the heroic president’s life.”

It was completed and dedicated in 1966. The striking abstract painting is 108 square feet and cost $25,000. Although chiefly black on white, it has a blue lower border and a bright yellow line running through a center section of white.

Almost as soon as it was hung, “New England Elegy” generated controversy. Its artistic merit was quickly bypassed, as some viewers found in it a Rorshach version of President Kennedy’s assassination. A great deal of ink and opinion ensued. The artist commented on this controversy, denying any such intent.

“The painting is totally abstract. It is not a picture of Kennedy’s death, but an elegy, which is an expression of grief for someone dead, like a requiem mass.”

No one ever claimed to find images in any of Mr. Motherwell’s other work, including the 103 additional Elegy paintings. Still, the image can be difficult to unsee.

The controversy was so powerful here, however, it preoccupied Bostonians for some time. Although a tempest in a teapot, it might have motivated some people to view the painting who otherwise would have ignored it as a work of art. I remember going to see “New England Elegy” after it was hung and, at the time, you could just walk into the building. 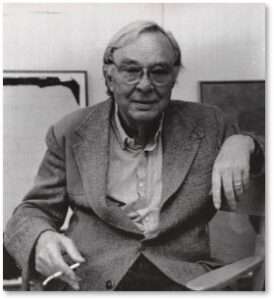 Robert Motherwell was an American abstract expressionist painter, printmaker, author, and editor. He was one of the youngest of the New York School of artists, which also included Willem de Kooning, Jackson Pollock, and William Baziotes.

Through his writing and teaching, he became an unofficial spokesman and interpreter for the Abstract Expressionist movement. Mr. Motherwell’s extensive oeuvre has been collected by major museums all over the world.

His third marriage was to the painter Helen Frankenthaler for 13 years. He died in Provincetown on Cape Cod in 1991.

The Kennedy Federal Building stands on the northwest side of Government Center Plaza, bounded by Cambridge, New Sudbury, and New Congress streets. 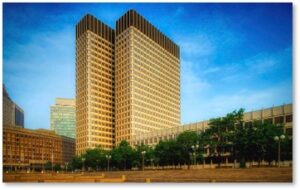 Master architect Walter Gropius (1883 – 1969) and his firm, The Architects Collaborative (TAC), designed the modern structure with the assistance of Boston architect Samuel Glaser.

The U.S. General Services Administration website says of his designs,

Check. Check, And check. You either like this structure or you do not. Construction began in 1963 on land purchased for $1.2 million. The construction itself cost $24 million.

Although technically one structure, the Kennedy Federal Building consists of twin 26-story high-rise towers, which sit on axis to each other, and a low, four-story building. This modern combination of tall towers paired with low buildings decreases the visual bulk that would be created by a single monolithic building containing 839,000 square feet. 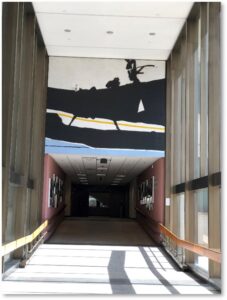 To find “New England Elegy,” go into the J.F.K. Federal Building’s Cambridge Street entrance, aka the Visitor’s Entrance, in the four-story portion of the building. A security screening station is located just inside the door.

When you go through the gate, you step into the glassed-in corridor with the mural straight ahead. It marks the entrance to the towers.