One expects to see fish on Atlantic Avenue in Boston. After all, Boston Harbor is right there outside, along with the New England Aquarium, which has lots of fish inside. But a school of codfish swims along the waterfront sidewalk as well. You just have to pay attention when you walk past them. 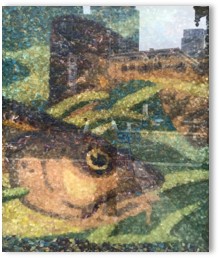 The mural “255 State Street Sea Glass” is installed right in a building’s exterior wall but it doesn’t call attention to itself. Passersby might even think it’s an advertisement of some sort. Fish are, after all, a profitable commodity near Boston Harbor and folks pay premium prices for it at the Legal Seafoods just around the corner.

The mural, made of tumbled and recycled glass and resin, shows a school of codfish swimming silently southward in a multicolored sea. According to a plaque, it “celebrates Boston’s waterfront heritage, fishing industry, revitalized harbor, and the important role the codfish has played in throughout Massachusetts’ history.”

The mural consists of six panels installed in the west wall of 255 State Street, right on the Atlantic Avenue sidewalk. It is colorful during the day but brilliant when backlit at night. Building owners Pembroke Real Estate commissioned the artwork.

The firm of Arrowstreet Graphic Design worked with 900 pounds of tumbled and recycled glass piece in 12 shades to create the mural. Next, their designers assembled the glass pieces by hand in custom-built frames to match the original illustration. This process, painstaking and meticulous, took nearly 100 hours to complete. ADG then fixed the glass pieces in place by pouring layers of resin into the frames. 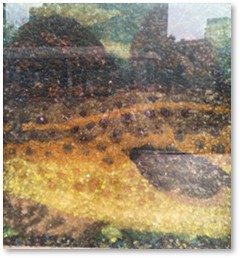 The material references sea glass, a substance once prevalent along the Atlantic shoreline. It came from bottles and jars carelessly tossed into the sea, where it was broken, weathered and tumbled by waves and sand. It emerged rounded, softened, and frosted. It can take from seven to 10 years for a piece of sea glass caught in the surf to gain a smooth texture and opaque surface.

In Boston Harbor, much sea glass came from the tons of trash once deposited on Spectacle Island before that dump was capped with dirt from the Big Dig and planted over. Sea glass is also much less prevalent these days as people are more careful about disposing of trash, whether from ships or shoreline.

Swimming with the Codfish

The Atlantic Cod (gadus morhua) drove profitable enterprises in Boston, which shipped it mostly to other countries. Author Meg Muckenhoupt tells us that:

“The finer grades of salt code were exported either to Catholic countries, including Portugal, Spain, and France, where the faithful ate fish on Fridays, or to England and other European countries where meat was expensive. The nastier grades, which were discolored, shredded, or even rotten, were known as ‘refuse fish’ and shipped to the West Indies and the American South to feed slaves.”

She reminds us that in a single year, 1763, Massachusetts fishermen exported 1,544,928 pounds of dried salt cod to the West Indies.

Boston appreciates the codfish and its contribution to the city’s prosperity. The 255 State Street mural is not the only artwork in Boston to celebrate codfish. We have one (arguably two) wooden codfish in the Massachusetts State House and several large bronze cod in Charlestown: 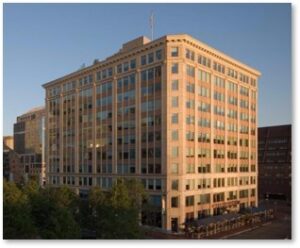 The mural is located on the west side of 255 State Street, directly on the sidewalk. This building occupies a square formed by State Street (which runs between it and the Long Wharf Marriott Hotel), Old Atlantic Avenue (where Legal Seafoods is located), Central Street, (which leads to the New England Aquarium), and Atlantic Avenue.

Pay the codfish mural a visit to let the fish know you appreciate their contribution to Boston’s history and prosperity.