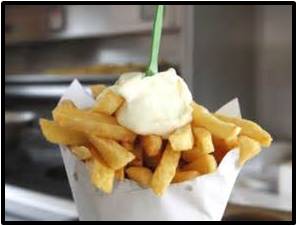 You might think this an odd topic for a blog post, but I assure you there is magic in those words. A Belgian frite is unique and holds a special place in my epicurean memories. They are impossible to duplicate for the simple reason that the potatoes, cooking oil and seasonings are germane to the country. If the frites are not Belgian, they are imposters.

My teenage years were spent in Belgium, the birthplace of frites. It was an amazing experience, difficult to describe to those who did not grow up as I did. My family was anticipating a stateside assignment after Dad finished a hardship tour in Korea.  Instead, he was redirected to the newly established NATO headquarters in SHAPE Belgium.

This year we are celebrating the 50th anniversary of SHAPE (Supreme Headquarters Allied Powers Europe) and this week there is a monumental reunion in Belgium that many of my friends and classmates are attending. Alas, I am not one of them. The timing was not right, but my heart and my very best wishes are with them as they travel, gather, reconnect and celebrate The Ties that Bind Us. In honor of this reunion let’s talk about what they will be doing.

They will be eating Belgian frites.

A Brief History of the Frite

Let me be absolutely clear about one thing: this is not a French Fry. Not even close. To label it as such is a great disservice to the frite itself and to Belgium.

Frites have an interesting history. In the 17th century the river Meuse in Belgium would freeze, preventing locals from fishing, so they began to cut their potatoes in the shape of fish and deep fry them. They called them frites.

Les frites are Belgium’s national dish and were wrongly given the name ‘French Fries’ by American soldiers when they arrived in Belgium at the end of World War II. They named the fries after the French language spoken in Wallonia (in the southern part of Belgium), creating confusion with the frites’ original nationality.

Start with the Potato 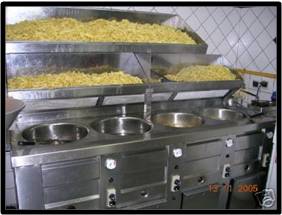 To understand the complexity of the frite, we have to start at the beginning, with the potato.

Frites are made with soft Dutch potatoes called bintjes. They are always cut thick and double fried in large vats containing a mixture of animal fat and vegetable oil.  Cooked frites are hand tossed in salt, then served in a paper cone with the signature Belgian mayonnaise. They are greaseless and incredibly crunchy. They are also addictive.

Frying them twice is critical to their texture and flavor. Between the first and second fry they are cooled, then tossed to create a slight bruising which results in crisp edges during the second fry. This is a crucial step in the cooking process. If the first fry is too crowded the temperature of the oil drops and the water in the potatoes will not release quickly enough. The result is a greasy fry. 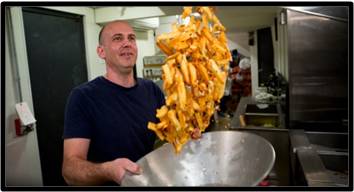 For a perfect frite, crispy on the outside and meltingly soft on the inside, you need to pay close attention to the first frying. If something goes wrong, it can’t be corrected in the second one.

A final word about the frite, and that word is mayonnaise. Most Belgians make their mayonnaise, and while ketchup and other sauces are always available at a frite stand, a true connoisseur will have them plain or with a side of mayo.

Where to Eat Frites

In the U.S. an attack of the late-night munchies might result in a run to the local Shake Shack or fast-food drive through, but in Belgium it’s a stop at the local frite stand. They open around 4:00 p.m. and close sometime after midnight. Frites are also served in restaurants as an accompaniment to almost every meal. If they don’t come with the meal, everyone orders them as a side. 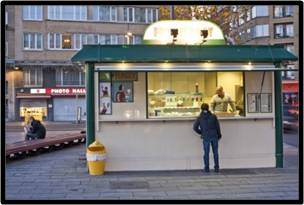 In theory, a frite can be eaten anywhere, but the iconic, and therefore best, place to get your frite fix is an actual frite stand and they are everywhere. That is all they sell, though the odd one will also include some local sausages. It is most often a stand-alone pre-fab shop or a trailer and every town has one. In my Belgian home town, it was King Frite, located just off the town square and righteously named; his craft was honed to perfection.

You can watch the preparation of each batch, cooked to order while you wait. It is part science, with a dash of culinary flare, and a whole lot of tradition. Once your cone of frites is handed to you, complete with tiny plastic fork, you can choose from an array of sauces displayed on a shelf inside the window.

There is Only One

If you’ve had the pleasure of real Belgian frites you know exactly what I’m talking about. If you have not, I can only encourage you to make a pilgrimage and experience them (and Belgium)first hand.

On a recent trip to Barcelona I happened across a store front “frite stand” and upon inquiry learned the owner was Dutch.  He prepared them in true Belgian style, following every step…but it was Spain. It was as close as I’ve come to the real thing.

To my BFF’s (Belgian Frite Fans)and SHAPE brothers and sisters: I am with you in spirit as we celebrate our heritage, our life-long friendships and our love and respect for all things Belge, but most especially the humble frite. 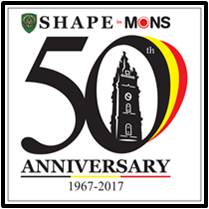