In last week’s post I gave the reason why the John Adams Courthouse seems to hide behind the curve of Center Plaza. This week I describe what you will see if you make your way to the front door and step inside. 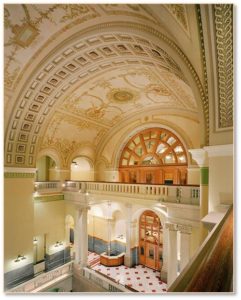 First, the basics: Boston City Architect George Clough designed the six-story granite building in 1893 as the Suffolk County Courthouse. Originally described as “German Renaissance” in style, experts now refer to it as transitional between the Second Empire style best see in Boston’s Old City Hall and the Classical Revival style of the Boston Public Library.

Four additional floors were added in 1909 and 1914. The building was added to the state and national Registers of Historic Places in 1974 and renamed the John Adams Courthouse in 2002. Residents would consider this architectural treasure to be a city landmark—if it were not so well hidden behind Center Plaza.

Step Through the Courthouse Doors

The architectural firm of CBT completely renovated and restored the interior of the courthouse—all 430,000 square feet of it—in 2005 with a care and attention to detail that shows everywhere you look. 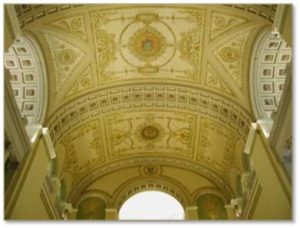 Ceiling of the Great Hall

Once through the front door I stepped into the four-story Great Hall and looked both around and up in amazement. The John Adams Courthouse possesses the artistry, decoration and sheer awesome space usually found in a museum, or perhaps a Belle Epoque train station like New York’s Grand Central.

Mr. Clough designed the great hall to serve as a ceremonial and exhibition space as well as a passageway for city residents to walk:

“. . . directly from Scollay Square up a small street to Pemberton Square, on through the Court House itself via the Great Hall, coming out the door onto Somerset Street, and facing straight ahead along Ashburton Place to the then newly expanded Massachusetts State House. It was a connector between the State House and then a bustling commercial area, between the governmental and the financial areas.”

Urban renewal changed all that, of course. It demolished Scollay Square and placed Center Plaza between City Hall and what is left of Pemberton Square.

I found the space awesome in both size and decoration. Muralist Albert Haberstroh, of the Boston firm L. Haberstroh and Son, painted the gold and white barrel-vaulted ceiling. His design uses bands of classical coffers with rosettes to demarcate the sections and frame the Great Seal of the Commonwealth in the center as well as the seals of the four courts that originally occupied the courthouse. Evergreene Architectural Arts restored the ceiling in 2003 to repair multiple forms of damage, including water infiltration, cracked plaster, and paint loss.

Sixteen architectural sculptures, life-size allegorical figures created by Domingo Mora, look down from the sides of the Great Hall. A plaque beneath each statue identifies it, like the saints and prophets in a cathedral. Highly individualized, the 16 men and women represent virtues of the ideal legal system. Beginning with the figure closest to the North Elevator, we see the figures of Law, Temperance, Prudence, Justice, Fortitude, Punishment, Guilt, Equity, Right, Innocence, Reward, Wisdom, Religion, Virtue, Reason, and Legislation.

Close up by George Peet

Sculptor Domingo Mora, a native of Barcelona, came to the United States in 1878 when Augustus St. Gaudens hired him to work in the master’s New York studio. Mr. Mora’s other Boston work includes the four large bas-reliefs on the façade of Congregational House, the more than 30 granite medallions in the spaces between the exterior windows in the Boston Public Library’s McKim Building, and—with St. Gaudens—the head of Minerva in the keystone over the library’s central arch.

A life-size bronze statue of Massachusetts attorney Rufus Choate by Daniel Chester French stands in the hall. Rooms on either side hold special exhibitions. One covers the life of John Adams while the other details the Sacco-Vanzetti Trial. The courthouse also includes the wood-paneled courtroom where Oliver Wendell Holmes Jr. once sat. Like the rest of the courthouse it has been beautifully restored.

Oh, you can also find clean public bathrooms inside when the building is open.

Information and Directions to
the John Adams Courthouse

The John Adams Courthouse is generally open for visitors on normal business days, Monday through Friday from 9:00 a.m. to 5:00 p.m. Court sessions are open to the public. For more information check out the Visit John Adams Courthouse’s page on the Mass.gov website. The main entrance opens on Pemberton Square and the rear door is located on Somerset Street. If you have trouble finding your way there, take the steps on the south side of Center Plaza. The staircases between the sections of the building will also take you up to Pemberton Square. Don’t be dismayed if all you see at the top are the grills of cars. 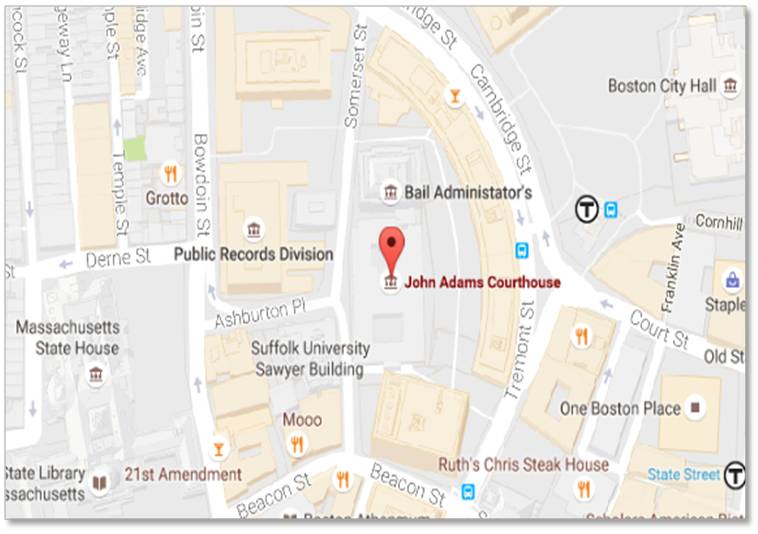 You can also reach the rear door on Somerset Street from either Cambridge Street or Bowdoin Street but I recommend the front door for the best initial view of the Great Hall. Government Center on the Blue Line and Green Line is the closest MBTA stop, right across the street from Center Plaza. You can park in the Center Plaza garage—although it is expensive during weekdays—the nearby Government Center Garage or private lots nearby.