If you have ever driven down the Southeast Expressway or shopped the South End’s SOWA Market, you have seen a tall, yellow-brick tower. Although it’s attached to a building, we remember the tower because of its height and architectural style. 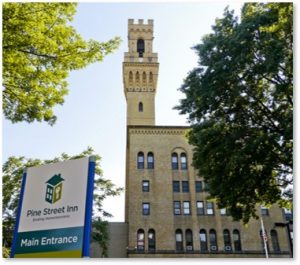 The tower looks like a transplant from Renaissance Tuscany because it was modeled on a famous building from Siena, Italy. Even if you have never been to Italy, though, you might find it familiar from a vacation on Cape Cod.

Both the tower and the building have had a varied history. Most of us think of it as the Pine Street Inn building but, before that, it was Boston Fire Department Headquarters.

The firehouse, built at what was then 60 Bristol Street in 1894, was part of a larger building complex that rose from the ashes of the Great Fire of 1872. In the aftermath of the devastating blaze. During that devastating blaze, everything that could go wrong did go wrong and the City of Boston took steps to prevent another such disaster.

The Bristol Street Fire Station, completed in 1893, provided one such innovation. Its tall observation tower in the South End gave the Fire Department a high and well-located vantage point that allowed them to see and pinpoint problems quickly. 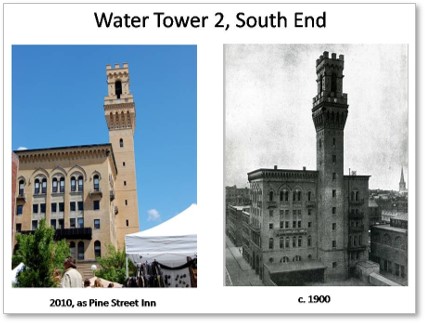 City Architect Edmund March Wheelwright, who worked in a variety of styles, took his inspiration for the Bristol Street building from Renaissance Tuscany. Designed in the style of a Medieval fortress, it features the distinctive tower of yellow brick. A crenellated turret supported by machicolated projections tops it.

The Bristol Street building, and the larger building complex of which it was part,  officially became Boston Fire Department Headquarters on July 1, 1895. The firefighters used the tower to dry hoses and to train recruits in how to scale tall buildings. For many years the fire tower actually ruled as the tallest city structure in Boston at 156 feet, exceeding the city’s 125-foot height limit.

Interesting Note: The Custom House Tower, built from 1913 to 1916, was a federal structure, which meant, that its 496-foot height was not subject to city height limits.

A smaller-scale and denser machicolation forms the cornice of the five-story brick building. 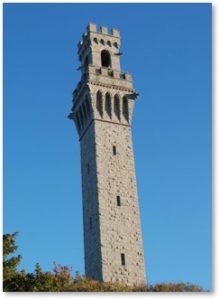 Looking across Cape Cod Bay, we find a nearly identical tower in Provincetown. The Pilgrim Monument went up in 1910, 17 years after the Bristol Street fire tower. Willard T. Sears, a Boston architect known for such structures as the Back Bay’s Old South Church and the Cyclorama in the South End, designed this one.

His design was selected from 150 entries in a competition for the Pilgrim Monument. The close similarity between Mr. Sear’s design and the Bristol Street fire tower caused a fair amount of criticism at the time. In January of 1907, the Boston Daily Globe said:

“Why this old tower of the late Gothic period in Tuscany should be selected as a model for the memorial to the Pilgrim Fathers down on Cape Cod puzzles the architects of this city, one of whom said: If all they want is an architectural curiosity, why not select the Leaning Tower of Pisa and be done with it.”

Interesting Note: Williard T. Sears collaborated with Charles Cummings on the Old South Church in Copley Square, which did have a tall belltower that leaned. Until it was taken down and reconstructed, wags called that campanile the Leaning Tower of Boston

Ditto confusion. I have read articles that say the fire tower copied the Pilgrim Monument instead of the other way around. Given the dates, of course, that would have been impossible. 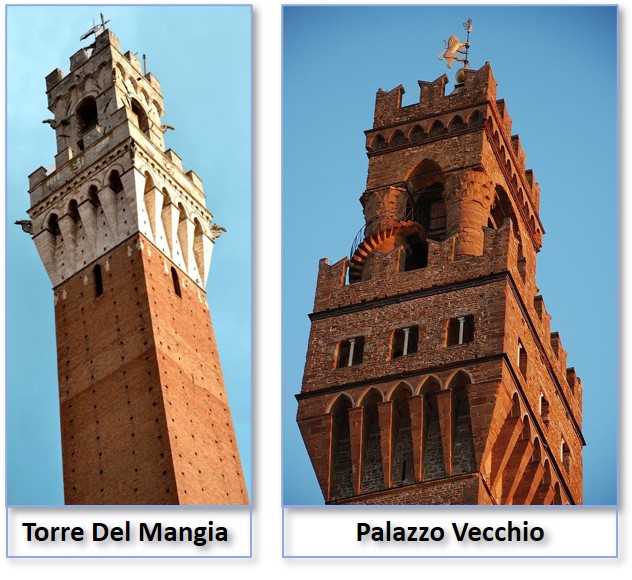 Also, though some books claim that both towers were modeled after the Torre del Arnolfo on Florence’s Palazzo Vecchio (1322), the real inspiration comes from slightly further south in Italy: the Torre del Mangia on the Campo in Siena (1338-1348) While similarities exist, one can easily see significant differences.

Interesting Note: the tower of the Palazzo Vecchio once held a bell that warned of fire, flood, or enemy attack.

Both the Massachusetts towers and the Torre del Arnolfo share an open arch with seven mini-turrets and a row of four corbeled arches on each side of the crown.

The Boston Fire Department moved to 115 Southampton Street in Roxbury in the 1950s and 29 years later the Pine Street Inn took over the old headquarters building with its signature tower. The Boston firm of  Childs, Bertman, Tsekaris and Casendina remodeled the building and tower in 1980.

During a maintenance project in the early 21st century, scaffolding covered the tower , and held a variety of commercial advertisements. These ads generated more than $2 million dollars for the homeless shelter but came down with the scaffolding in 2008.

You can find Boston’s Tuscan tower by driving down the Southeast Expressway or walking through the South End. Just look up; you can’t miss it.