Thirty-five days from now the polls will open and voters will elect the next Leader of the Free World. This individual will represent America on the global stage for the next four (more likely 8) years, speaking on behalf of all citizens, students, employees and employers. If you were not planning on going to the polls please change your mind.

Assuming you’re over 18, your vote represents the future of our country. Your voice must be heard. You are more than a statistic churned out by the media on Election Day and voting is your right. It is a system that works best when everyone exercises that right.

No matter which party you support, or which candidate you favor, make sure your voice is heard. It is you civic duty to go to the polls and cast your vote. Despite the political poll dancing we have endured from both candidates we must all participate in the November election. Let it be known.

I have voted in every election since I was granted the privilege. I have never seen candidates or campaigning quite like this and admit I thought about not voting. If this were a poker hand, I’d fold. 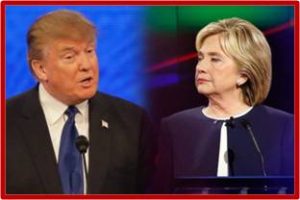 Insults have replaced ideas.  Accusations have replaced accuracy. New verbal lows have been set in print ads, media, debates and Twitter. We have proven beyond a doubt that anyone can grow up to be President.

In past elections the Democratic and Republican candidates have shared a baseline belief in the American system. Not so in this election season. Some might say they are well matched as opposites. Others would say it’s a freak show.

Their presentation and personal styles are starkly different. Neither hides their contempt for the other. Both believe unequivocally in their platform and have used and abused social media like no candidates before them. Do not be deterred.

After watching the debates I found myself thinking there must be another way to get their points across. This campaign has created a negative outlook on politics; both candidates care more about attacking the other’s personal character than the problems we face as a nation. They disrespect each other, the moderators, and the media. Do not let this behavior keep you from casting your vote.

Job futures are heavily dependent on economics and the labor force. Your education or that of your children’s children hinges on what the next president puts forward for an education budget. Let your voice be heard.

Here is the biggest paradox of voting: no matter how passionate you are about your candidate most voters believe the probability that their vote will be decisive is so small there is no positive aspect to voting. Not true! It takes time to understand the issues and study the candidate’s positions and their ability to execute on promises made in front of cameras. Profound differences distinguish the two major parties.   Make an investment in understanding what each of them really stands for and go to the polls.

Census data collected over the last ten years tells us the inconvenience of voting is one of the primary reasons Americans do not participate in the election. One in four people say they are too busy.

There are a number of factors that affect our ability to go to the polls, and one of them is Tuesday. The presidential election is always held the Tuesday following the first Monday in November. There is history here.

In the 1800s America was an agrarian society and the primary mode of transportation was horse and buggy. Farmers did not live near the polling place; it took a day to get to the county seat to vote and a day to get back.

Weekends interfered with worship and Wednesday was market day so Tuesday was selected as the most convenient day to hold elections. Spring and summer would interfere with planting and fall brought the harvest. That left the month of November, when the harvest was complete and winter was still a ways off.

Today, mini-vans have replaced buggies. Going to the polls means getting up early, leaving work early, finding parking, standing in lines and wondering just how much your individual vote will count among millions cast. We should seriously think about changing Election Day to make voting easier.

We moved Columbus Day, Presidents’ Day, and Martin Luther King, Jr.’s holiday for the convenience of schools and consumers. Why not make Election Day convenient for voters?  There is no guarantee it would change the turnout, but it would remove current excuses and obstacles.

America has had presidential elections where both candidates represented variations on a central message. In the 1960s one had to look hard to find differences between the moderate liberalism of John F. Kennedy and the moderate conservatism of Richard Nixon. When you consider everything that’s at stake in November, this one has the potential to be truly pivotal.

Fast forward to the Obama administration, where Democrats have lost over 900 state legislative seats and Republicans now exercise unified control of 25 state governments—the most since 1952. The election stakes are high.

Next year, a president will be sworn in with three octogenarian justices (Ginsburg, Scalia, and Kennedy), and a fourth in his late 70s (Breyer). The new President will be the first to shift the Court’s balance of power since George H. Bush replaced Thurgood Marshall with Clarence Thomas 25 years ago.

Every Vote is Important

The presidency has a lot of power in our system of government. Our new leader will preside over critical decisions relating to health care policy, foreign diplomacy, Social Security, and the environment, and will shape the character of the Supreme Court for the next generation.

Every election is important. Whether you’re with Her or with Him, let your vote be your voice on November 8th.