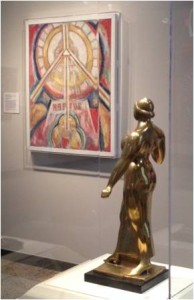 I’m not sure how I missed even knowing about the Currier Museum of Art for so long but we remedied that omission on Sunday. When I learned about the Currier, tucked away in Manchester, New Hampshire, I immediately formed a few ideas about what it would be like:

Boy, was I wrong—and happy to admit it. The Currier is a gem that deserves much more publicity and awareness than it receives. First, it’s not small except by comparison with the really big institutions in major cities. @CurrierMuseum is about the size of the Harvard Art Museums in Cambridge and bigger than the Neuberger Museum of Art in White Plains, NY. Housed in a classical revival granite structure in an elegant residential section of Manchester, the Currier offers a first-class collection of paintings, sculpture, glass, furniture, and decorative art. So much for assumptions.

The incentive that took us on a 50-mile road trip was an exhibition of hyper-realist works on loan, ironically, from the Yale University Art Gallery. Called “Still Life: 1970s Photo Realism,” it’s an exhibition worth the drive.  These works are exhibited back to back with “Painterly to Precise: Richard Estes at the Currier,” giving the visitor a remarkable look at art so detailed and precise it’s hard to tell the paintings from a photograph—or from reality—until you get up close. When you do that, however, it’s difficult to imagine how the artist kept his perspective while wielding the brush. Take a look, for example, at this very large painting of a chewing gum wrapper. From a distance, it’s indistinguishable from reality. Up close, however, you can see the incredible detail that went into producing the finished image.

The visitor goes from one astonishing image to another, being careful not to step on or bump into scattered sculptures of people that are so lifelike it’s sometimes creepy. The drug addict below felt weirdly out of place in a museum on a Sunday afternoon. 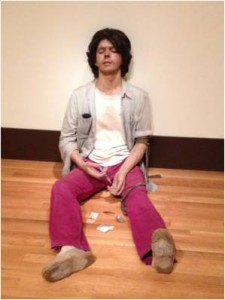 Outside of these exhibitions, the Currier’s regular collection is quite simply amazing. The modern and contemporary works are enough to draw visitors, especially given the paucity of such works in Boston’s Museum of Fine Arts. I have commented on this gap in the MFA’s collection before but it was particularly relevant given the Currier’s location in a distant and relatively small city. Name an iconic artist of the period and he or she is represented here: Picasso, Matissse, Hopper, Nevelson, Roualt, Sheeler, Wyeth, and Hartley among them.

The MFA has one painting by the late Neil Welliver, who is one of my favorite artists. The Currier has two. Its American art collection includes the last painting John Singer Sargent completed in his lifetime along with Benton, Bierstadt, Hassam, Copley, Wyeth, Gilbert Stuart, and many others. The American collection even includes a painting of one of the old Fall River Line ships, the State of Maine.

Do many of these works come from New England? You betcha. Like most museums, the Currier identifies each work with its name, the name of the artist and the date(s) of completion. Unlike most museums, however, the Currier adds the artist’s place of birth and death, wherever those might be. But that doesn’t mean the collection reflects a parochial view of art. Instead it tells us just how many great artists either came from cities and towns around New England or moved here to paint.

We spent hours at the Currier Museum of Art and left just before closing time. I would love to go back for a return visit in the spring or summer to tour the Zimmerman House, which was designed by Frank Lloyd Wright and is listed on the National Register of Historic Places. Mr. Wright designed the house, the interiors, all the furniture, the gardens, and even the mailbox. A tour includes the Zimmermans’ personal collection of modern art, pottery and sculpture. The Zimmerman House is the only Frank Lloyd Wright dwelling in New England that’s open to the public. 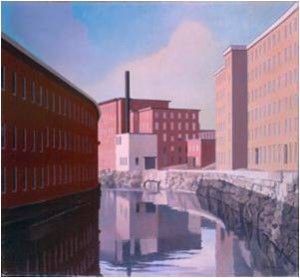 In short, a visit to the Currier Museum of Art is well worth the drive.  You can easily include a meal at one of Manchester’s many restaurants or drive around the old Amoskeag Mill buildings that are being repurposed after many years of lying empty. The photo-realist exhibition runs until May 2.

The Currier Museum of Art brings my life list of art museums to a total of 36. Next on my list is a trip to the Wadsworth Athenaeum in Hartford, Connecticut, to see their current exhibition of Coney Island art.