When I was traveling on business, I often found a way to do and see things outside of my work agenda. Whether it was visiting Kartchner Caverns near Tucson, AZ or Taronga Zoo in Sydney, Australia, I made sure that I appreciated and got the most of the many cities and countries I was fortunate enough to be in. (I wasn’t leaving Australia without seeing a kangaroo and not many of them hop into office buildings and conference rooms.)

I try to do the same thing when we travel on vacation and to family events. This past weekend we were in White Plains, NY for the bar mitzvah of Seth’s cousin’s son and that gave us the opportunity to visit two art museums in Connecticut.

The Neuberger Museum of Art

With Saturday afternoon free, we headed up to the Neuberger Museum of Art on the campus of SUNY, Purchase College. This is an interesting small museum housed in a building designed by Philip Johnson. I am not a big fan of Mr. Johnson’s work and this building did nothing to change my mind as it looked like several plain boxes grouped and stacked asymmetrically.

Fortunately, the collection of mid-century modern art acquired by Roy R. Neuberger more than made up for my disappointment in the building. It’s especially impressive when you consider that these pieces are only the tip of a massive body of work collected by this remarkable man over the course of his life. Knowing that he wanted to collect art, he set out to earn the money needed to do so.  He went to work on Wall Street (in 1929!) and eventually founded the brokerage firm of Neuberger & Berman. 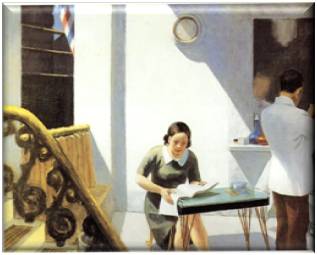 Mr. Neuberger had a philosophy with two components: (1) Art should be acquired in the artist’s lifetime, and (2) Art should never be sold. Thus he set his sights on the printmakers, painters and sculptors who were making a name for themselves at the time.

Given that Mr. Neuberger founded his firm in 1939 and died at 107, he had access to an extraordinary group of living artists who changed the direction of art history. The result was an astonishing collection, which he housed at the brokerage firm as well as his house. I was particularly fond of Edward Hopper’s beautiful “The Barber Shop” but no reproduction can do justice to the quality of the light and depth of color in this painting.

Mr. Neuberger kept careful records of his purchases and his notebook is displayed in the museum. In 1949 Mr. Neuberger paid $800 for a Jackson Pollock painting. While that sounds like a ridiculous bargain, the purchase price would have been $7,717 in today’s money. That’s still a ridiculous bargain, or course, but you have to put it in the context of spending that kind of money on the work of an emerging—and ground-breaking—artist today. Although he never sold art, Mr. Neuberger was a generous patron who often gave it away and some of the works he collected can now be found in more than 70 institutions in 24 states.

I have a feeling I would have liked this man had I been fortunate enough to meet him. He wrote two biographies and the titles say it all:

On Sunday’s drive home, we stopped in New Haven to visit the Yale University Art Gallery and spent a wonderful afternoon browsing through just a part of its extensive collection. It’s all housed in three connected buildings in a variety of architectural styles along Chapel Street: 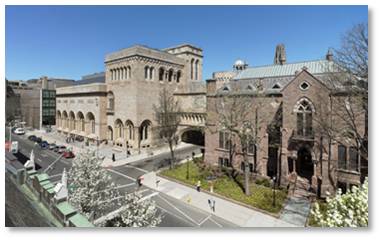 (The original Picture Gallery at Yale, designed by John Trumbull in 1852, is no longer standing. But the Art Gallery stands across the street from the university’s School of Art and Architecture, which is housed in an iconic building designed by the school’s former dean, Paul Rudolph. Once you know Mr. Rudolph’s style, it becomes immediately recognizable. In Boston, you can see Mr. Rudoph’s Government Service Center on Cambridge Street.)

Somehow these architects have pulled the disparate buildings with their mismatched floors together into a harmonious whole that allows you to move smoothly through the collections without being distracted.  The European art collection has a few excellent pieces but is not comprehensive. The American art collection is larger and much more interesting, with works by artists from John Trumbull to Alfred Bierstadt, Winslow Homer, John Singer Sargent, and Frederic Remington.  It’s well worth the time spent browsing through it.

But the mid-century modern gallery is really jaw-dropping. Although this has not been my favorite period and I often skim through these works, this collection really drew me in. Every major painter and sculptor of the period is represented here—including two wonderful paintings by Edward Hopper. I found works that I had only seen previously in art history books; I had no idea they were housed only two hours away in New Haven.  And I discovered that these masterworks often have greater power when seen in person than they do in reproductions. The depth of color, quality of light, shape and volume, and their simple presence both hold and impress the viewer. 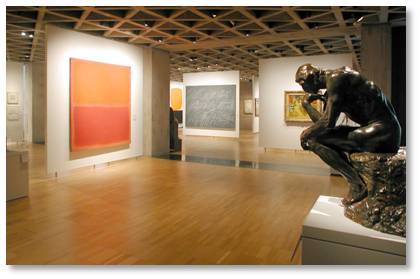 Thinking about modern art at Yale

I have missed this insight because the Boston Museum of Fine Arts pretty much ignored the mid-century modern period and has a thin, inferior collection. Although they are now trying to rectify this omission, the lack of galleries like those at Yale is a big hole.  And @YaleArtGallery acquired many of its pieces through donations. Perhaps Bostonians have been less adventurous in their collecting and thus have fewer works of mid-century modern art to donate to @MFA.

Altogether, we had a wonderful time roaming through these two art museums in Connecticut and I can now add them to my life list. If only I had the money, I would love to be a passionate collector like Roy Neuberger.  Where I would put them in my downsized condominium, I have no idea. But it would sure be fun.