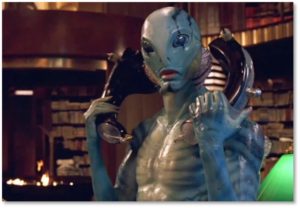 Doug Jones as the creature

It’s time to circle back to my earlier post on 13 science fiction movies that were scheduled for release in the last half of 2017 and let you know how they did. As usual, there’s some good news, some bad news and a healthy dose of confusion.

The report uses my standard format that provides information on how these movies did both critically and financially, plus whether we saw them or passed.

Here are the 13 science fiction movies in H2 2017 in chronological order of their actual release dates—which may differ from the dates in my earlier post. Things change. Production budgets are estimated and rounded up. Movie links go to the movie’s IMDB page.

“Bright is the No. 1 movie on Netflix internationally, and is the “highest viewed Netflix film ever on the service in its first week of release and one of the biggest originals (including sequels/additional seasons) Netflix has ever launched.”

Netflix has ordered a sequel and it is already underway with the original cast.