I wrote a roundup of June-July 2022 posts because my life has been busy lately. I haven’t had as much time to spend writing blog posts as I usually do. Sometimes that’s been for the better, but other times the demands on my time have thrown a monkey wrench into my schedule. 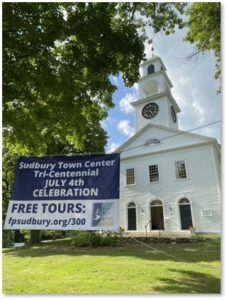 The time around Independence Day gave me a lot of things to do. The town of Sudbury, MA, celebrated its tricentennial this year. At the same time, the First Parish of Sudbury commemorated 300 years in its location, albeit in two different buildings. We opened the doors of our 1797 meetinghouse to visitors and I led three tours through the building and memorial garden. I even donned authentic colonial costume to do it.

I learned two things: (1) those antique clothes were heavy and, of course, difficult to move around in, and (2) I am never doing that again. The tours went well and I raised some money for ongoing maintenance of the building. Any structure that old requires both money and time for upkeep.

And speaking of tours, the season is well underway. I have led fewer tours than usual, though, because the price of gas has eaten into my profits. Now that the cruise ships are returning to Boston, though, that is changing. The pay and tips make it well worth my while to go to the city. 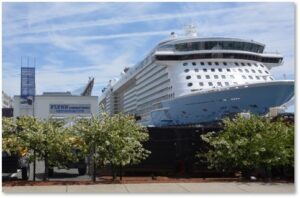 I love swinging up onto a bus and talking for two hours while the driver navigates Boston traffic. When tourists take my bus, they learn about Boston from the ground up—literally. I give them information on geology, land-making, history, art, architecture, construction, and funny stories. They get their money’s worth.

But, man, those cruise ships are big. Every time I walk up to the Black Falcon Terminal/Flynn Cruiseport, I just stare at these enormous vessels. They seem to get bigger every year. I like people but not that many crowded in one place. Me, I’ll stick to Viking River Cruises—smaller boats and fewer passengers. 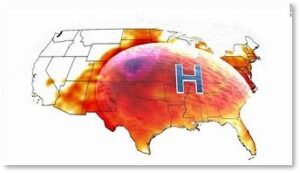 I’m not ready for fall yet, though. In the meantime, here’s the summary of July-July 2022 posts on The Next Phase Blog.

As usual they are grouped by category and in chronological order. 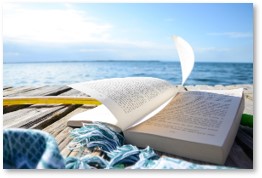 Behind us lie Memorial Day, Independence Day, and the All-Star Break. Ahead we look forward Labor Day and the opening of school, in whatever order they fall. We can look forward to an autumn that will be eventful—for better or worse.