Have you ever walked down a city street and taken notice for the first time of a building you’ve passed almost every day? Did you wonder why that building is so much bigger or smaller than those around it? Why it’s set apart from its neighbors in some way? What makes it special? 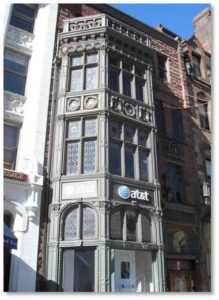 Boston has quite a few such buildings. While they don’t exactly hide in plain sight, it can be very easy to pass by without registering much beyond the fact that it’s unusual.

One structure that has fascinated me is the Haberstroh Building on Boylston Street. It seems out of place snugged up on the east against the Parish House of the Old South Church.

That bay—detailed and ornate with beveled and colored glass elements—intrigued me. It seemed like a piece of Medieval London that had been dropped into the Back Bay.

A Home Built on Speculation

Although the ground floor now holds an AT&T store, the Haberstroh Building didn’t start out as a commercial structure on a popular shopping street. George Wilton Lewis  designed the building at 647 Boylston Street (without that copper bay) to be a private home and built it on speculation. Its flat, quarry-faced surface of the large square-cut stones known as ashlar, blended well with the Old South Church’s Roxbury conglomerate and freestone façade next door.

Between 188 and 1902, Dr. Edward Newton Whittier moved in. A captain in the Union Army, Dr. Whittier received the Medal of Honor for gallantry during the Battle of Fisher’s Hill near Strasburg, Virginia in 1864. In Boston he served on the staff of the Harvard Medical School, which was then located where Massachusetts General Hospital is today. He would have enjoyed a pleasant walk to work through the Public Garden and then down Charles Street to the HMS building.

After Dr. Whittier’s death in 1905, Albert Haberstroh, owner of L. Haberstroh and Son, purchased the building and converted it to business use. He designed the four-story copper bay and entrance and moved in, thus giving the building its name. His design incorporates Gothic and Elizabethan elements. These were executed by the Van Noorden Sheet Metal Company, located in Roxbury at 100 Magazine Street. 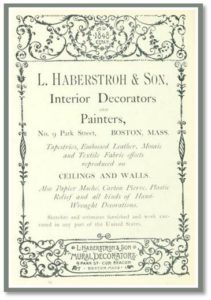 Albert Haberstroh was the son of Lucas Haberstroh, who emigrated from Germany and founded an interior decoration and painting firm. Albert became a partner in the company and took over upon his father’s death in 1883. He then moved L. Haberstroh and Son from School Street to the Society of Arts and Crafts in another interesting building at 9 Park Street.

Mr. Haberstroh painted the beautiful ceiling in the John Adams Courthouse nearby. 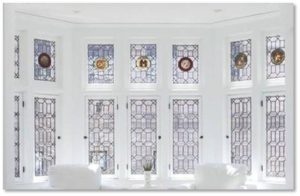 Although 647 Boylston Street no longer functions as a single private home, people still live there. They occupy modern condominiums on the second and third floors.

These residences sell for over two million dollars each. The interiors give us the best view of the beautiful glass work in the bay as the sun shines in through them.

You will find 647 Boylston Street between Dartmouth and Exeter Streets across from the Boston Public Library’s McKim building and a short walk from the BPL’s newly renovated Johnson Building, which is also worth a visit. While you’re there, check out the MBTA’s historic Copley Station headhouse. 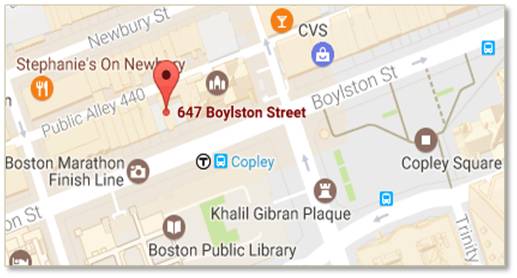